The new White House COVID-19 response coordinator, Dr. Ashish K. Jha, said Monday that while there had been a recent uptick in new U.S. coronavirus cases, he was not overly concerned.

“We’ve got to watch this very carefully — obviously, I never like to see infections rising — I think we’ve got to be careful,” Jha said on the “Today” show. “But I don’t think this is a moment where we have to be excessively concerned.”

Jha, a public health expert, made several media appearances Monday, his first official day according to the White House, and he pointed to low hospitalization numbers across the United States. The vast majority of the country has low community levels of COVID-19, according to calculations performed by the Centers for Disease Control and Prevention that are designed to assess the number of new cases in a community and the strain on its hospitals, a point also made on Sunday by Dr. Anthony Fauci, President Joe Biden’s top pandemic adviser.

“Right now that is showing an uptick, but not showing substantial changes in what we should be doing,” Jha said on CNN, referring to the CDC framework. “And I think the CDC policy is right on this.”

And while he touted the role of at-home tests, Jha acknowledged many of those results may go unreported, underpinning, he said, the importance of hospitalizations as a metric.

Jha’s tenure begins as a highly transmissible omicron subvariant, known as BA.2, has become the dominant version among new U.S. cases. As of Sunday, the United States was averaging more than 31,000 cases a day, an increase of 3% over the past two weeks, according to a New York Times database, just a fraction of the height of the omicron winter surge.

Still, New York City and Washington, D.C., are among the places seeing steeper increases than the nation overall, though their average numbers of new cases remain far lower than recent peaks, too. Prominent officials in both cities, such as House Speaker Nancy Pelosi and Mayor Eric Adams of New York, have tested positive in recent days, as have some Broadway stars.

On Monday, White House press secretary Jen Psaki said that both Biden and Vice President Kamala Harris had tested negative in the past 24 hours. Harris had been considered a close contact of her communications director, who tested positive last week, but the vice president was now five days post-exposure, Psaki said.

A handful of colleges and universities in the country have reinstated mask mandates as they battle outbreaks on campus. On Monday, the city of Philadelphia announced it would soon reinstate an indoor mask mandate.

And after the Gridiron Club and Foundation’s annual dinner in Washington on April 2, at least 80 attendees tested positive, Tom DeFrank, a contributing editor for National Journal and president of the Gridiron Club, said in an email Monday afternoon. The number of new cases reported each day has been declining, he said, adding that reported symptoms remain mild, with several asymptomatic cases.

“Now that we are nine days after the dinner, the connection between a new positive test and our dinner is certainly arguable, particularly for public officials who have had a full week of public events,” DeFrank said in a statement.

Neither Biden nor Pelosi attended the Gridiron dinner, and Pelosi said Monday that she would be leaving isolation Tuesday after testing negative Monday.

Elsewhere in the House, Rep. Rashida Tlaib, D-Mich., said Monday she had tested positive. In Connecticut, the lieutenant governor, Susan Bysiewicz, said she tested positive, too.

Jha also told the “Today” show that the CDC would get the final say on the future of the mask mandate on airplanes and other public transportation — but said that extending the requirement, which goes through at least April 18, “is absolutely on the table.”

Jha replaced Jeffrey D. Zients, who left the position to return to his private life, according to the White House. Zients, an entrepreneur and management consultant, steered the White House response and U.S. vaccination campaign through multiple variants. 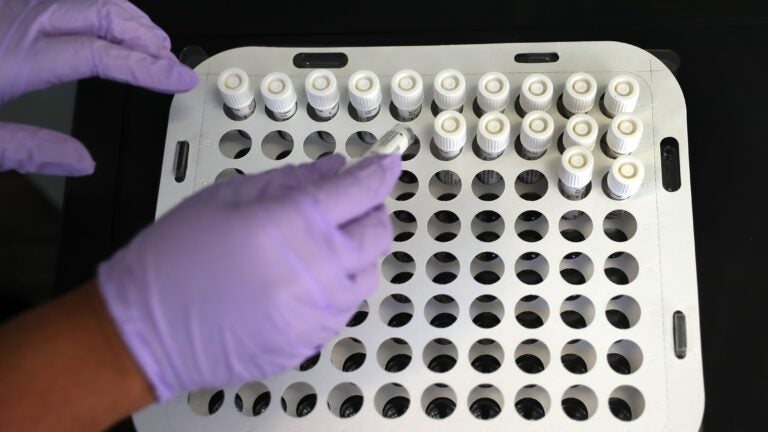