LAGUNA WOODS, Calif. — Gathered to celebrate a beloved former pastor, snapping photographs of their Sunday church luncheon, the members of the Irvine Taiwanese Presbyterian Church did not notice, at first, the 68-year-old stranger in their midst.

He had been there before, the man assured a receptionist. But it was not until later, when he opened fire with one of his two semi-automatic pistols, that the churchgoers, most of them retirees, took notice. Only then, scattering in terror, did they realize that the doors to the multipurpose room at the suburban Southern California campus where they were meeting had been chained, nailed and super-glued shut.

On Monday, a day after the attack that killed one person and wounded five others, authorities announced murder and attempted murder charges against David Chou, a Las Vegas man with a wife and child in Taiwan who had traveled to Orange County with a grievance against Taiwanese people. At a news conference, the Orange County sheriff, Don Barnes, called the mass shooting a “politically motivated hate incident.”

The shooting, the nation’s second in two days considered a hate crime, came as authorities in Buffalo, New York, were investigating a supermarket massacre that claimed 10 lives; the suspect in New York, a white teenager who livestreamed the assault, is accused of having driven across the state to kill Black people.

Barnes said that Chou had apparently acted alone, setting an elaborate trap, although it was not clear why he had chosen this out-of-the-way church as a target. He said that investigators had found notes in Chou’s car, which was parked outside the church, that were proof of his “hatred of the Taiwanese people.”

The sheriff said Chou, who had emigrated to the United States and is an American citizen, had been living alone in a rented room and appeared to have no ties to the congregation.

Authorities said the shooting erupted at about 1:26 p.m. local time Sunday. Congregants said they had been celebrating the return from Taiwan of a former pastor, Rev. Billy Chang, with a luncheon and had gathered after the morning service in the church’s multipurpose room.

Most of the victims came from Taiwan and ranged in age from 66 to 92, Barnes said. Four were critically wounded, but their conditions improved Monday, authorities said. The FBI said it had opened a federal hate crime investigation into the shooting.

Authorities and witnesses said that one church member charged the shooter as he fired apparently at random with two firearms that he had legally bought.

John Cheng, 52, of Laguna Niguel, a sports physician and co-founder of the nearby South Coast Medical Group, was shot and killed after he tackled the shooter and tried to disarm him, Barnes said. Cheng’s intervention, he added, allowed the visiting pastor — who had led the service that day — to throw a chair at the shooter while others helped to restrain him, confiscating two weapons and hogtying him with extension cords.

“If not for their quick action, the way that this individual set up that environment to kill many more people, there would have been many, many more lives lost,” the sheriff said.

Johnna Gherardini, the medical center’s executive director, said that Cheng, who was not a church member, had picked up his mother from her home at Laguna Woods Village and taken her to church Sunday. Raised in Texas, the physician was not religious and did not have strong political views about China, but was there in solidarity with his mother, who was mourning the recent death of his father, she said.

Cheng, who is survived by his wife and two teenage children, was also an accomplished master martial arts instructor.

“He was there for a reason,” Gherardini said.

The shooter had secured the church doors with chains and had attempted to disable the locks with glue, the sheriff said, adding that he also tried to nail one of the building’s doors shut. Bags filled with magazines of ammunition, as well as several incendiary devices, were found on the church grounds, Barnes said.

The sheriff said Chou had lived in the United States for many years but also resided in Taiwan at some point. “I believe his hatred of Taiwan manifested when he was residing there in previous years, possibly in his youth,” Barnes said. “He was not well received while living there, according to what we believe we’ve collected so far.”

It is not clear when Chou lived in Taiwan. About 70 years ago, 1 million or so Chinese retreated there with the Nationalists during the Chinese civil war against the communists. They encountered residents on the island who had been there for centuries, many of whom spoke a different dialect. In recent decades, some mainland Chinese have also moved to Taiwan to work and study.

The sheriff also referred to “China and Taiwan tensions that are current.” Beijing has long claimed Taiwan, a self-governed democratic island, as its own territory, and has threatened to absorb it using force if it deems necessary.

“Typically, we try to be friendly,” Huang said, adding that he occasionally played table tennis, or participated in line dancing at the community center together with other Chinese residents. He added: “Nobody says you are Chinese, and I’m Taiwanese, so we won’t play with you.”

Wei-Ming Tao, 67, a retiree living in Laguna Woods, confirmed that those in the community generally tried to steer clear of politics of any kind in conversations. But she added that the confluence of the coronavirus, the rise in racist acts against people of Asian descent, and Russia’s war in Ukraine had created a simmering environment that was inescapable, even in an ordinary peaceful haven.

“We don’t need this kind of political agenda,” Tao said. “The hate crimes — we had enough, we don’t need any more.”

In a series of text messages Sunday, the Rev. Albany Lee, the church’s current pastor, said congregants told him that Chang and several other men had pinned the shooter to the ground “before he loaded another round of bullets, thank God.”

The shooting served as another reminder that religious sanctuaries are not immune from the gun violence that has occurred in virtually every public space, from grocery stores to schools. Just 70 miles southeast of Laguna Woods, a man in 2019 killed one woman and injured three people at a synagogue in Poway, a shooting incident that was a hate crime.

The sheriff, meanwhile, called the shooting an example of “the ugliest part” of the divisiveness raging across the country. “At some point we have to put aside our difference,” he said, “and focus on our humanity.” 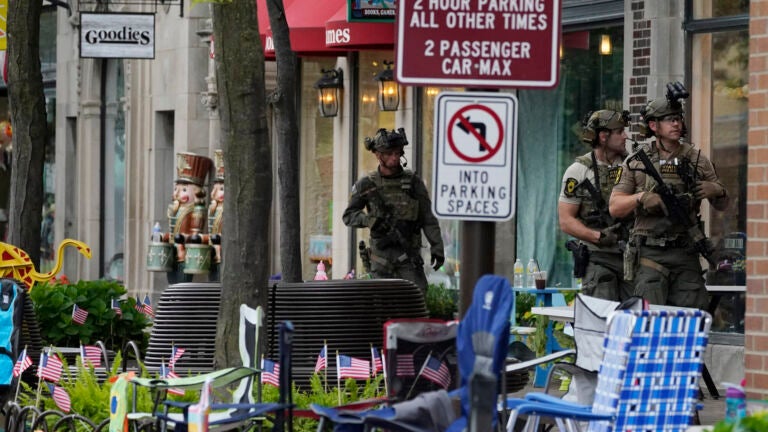