Republican lawmakers in Indiana on Tuesday banned transgender girls from playing on girls’ sports teams at their schools, overriding the veto of Gov. Eric Holcomb, a fellow Republican who said the measure did not address any pressing problem and exposed the state to lawsuits.

The override made Indiana the latest conservative state to enact legislation blocking transgender girls or women from playing on sports teams that align with their gender identity. Though the details of the laws vary from place to place, at least 17 other states have introduced restrictions on transgender sports participation in recent years, according to data from the Human Rights Campaign, an LGBTQ advocacy group.

Sports participation by transgender girls and women has become an increasingly divisive topic among political leaders and sports sanctioning groups, which have struggled to address the issue in a way that respects transgender athletes and concerns that some have raised about competitive fairness. This year, Lia Thomas, a member of the University of Pennsylvania’s women’s swimming team, became the first openly transgender woman to win an NCAA swimming title.

The Indiana override was not a surprise. The bill passed both chambers of the Republican-controlled Statehouse by large margins this year, and overrides in Indiana require only a simple majority in the House and Senate.

“Your vote will send a clear message that Indiana will protect the integrity of female sports,” state Rep. Michelle Davis, a Republican and former college athlete who sponsored the bill, said shortly before the House voted to override.

Officials in Arizona, Georgia, Iowa, Kentucky, Oklahoma, South Carolina, South Dakota, Tennessee, and Utah have enacted new measures this year, joining several others that have done so since 2020.

Transgender sports bills have attracted wide but not universal support from Republican politicians. In Utah, lawmakers overrode the veto of Gov. Spencer Cox, a Republican. In Kansas and Kentucky, Democratic governors vetoed similar bills passed by Republican-controlled legislatures. The Kansas veto stood, but Kentucky lawmakers voted to enact their restrictions over the governor’s objections.

Legislation on transgender issues has not been limited to sports participation, with some states also targeting transgender bathroom access and gender-affirming care for children.

Holcomb, a Republican in his second term, vetoed the bill in March, diverging from many other Republican governors who enthusiastically signed similar measures. The bill, known as HEA 1041, was likely to be challenged in court if it became law, Holcomb said at the time. He also questioned whether it was solving any pressing issue, writing in a letter to lawmakers that “the presumption of the policy laid out in HEA 1041 is that there is an existing problem in K-12 sports in Indiana that requires further state government intervention.”

“It implies that the goals of consistency and fairness in competitive female sports are not currently being met,” the governor added in his letter. “After thorough review, I find no evidence to support either claim even if I support the overall goal.”

Many Democrats and supporters of transgender rights agreed with the governor and urged Republican lawmakers to sustain the veto. Opponents of the bill gathered in the Statehouse before the votes.

“We are spending our time to make children feel bad about themselves,” said state Sen. Shelli Yoder, a Democrat, who said she worried that the legislation could damage children’s mental health. Yoder predicted that the bill’s “hatefulness and discrimination will be proven in the court of law.”

Even after Holcomb’s veto, the Indiana bill retained support from many of the state’s most powerful Republicans. Attorney General Todd Rokita repeatedly praised the measure, which he said would ensure an even playing field for young athletes, and vowed to defend the state from any lawsuits that might result.

“Hoosiers won’t be bullied by woke groups threatening girls’ sports,” Rokita wrote this month in a piece published by The Hamilton County Reporter, a local newspaper.

Holcomb, who is prevented by term limits from running again in 2024, came to power in Indiana in the months after Gov. Mike Pence signed into law a measure its supporters referred to as the “Religious Freedom Restoration Act” in 2015.

That law was presented as a way to protect religious business owners from having to provide cakes and flowers to same-sex weddings, but it unleashed fierce opposition, including from some of Indiana’s most prominent businesses. It was quickly rewritten to explicitly ban discrimination based on sexual orientation or gender identity.

Holcomb, whom Pence appointed as lieutenant governor after the backlash to the law, stepped in as the Republican nominee for governor in 2016 after Pence was selected as Donald Trump’s running mate.

During his time as governor, Holcomb has embraced many conservative policies, including a measure he signed this year allowing people in Indiana to carry handguns without a permit. But he has sometimes taken a more moderate stance than other Republicans, frustrating some conservatives with virus restrictions in the early stages of the pandemic.
This article originally appeared in The New York Times. 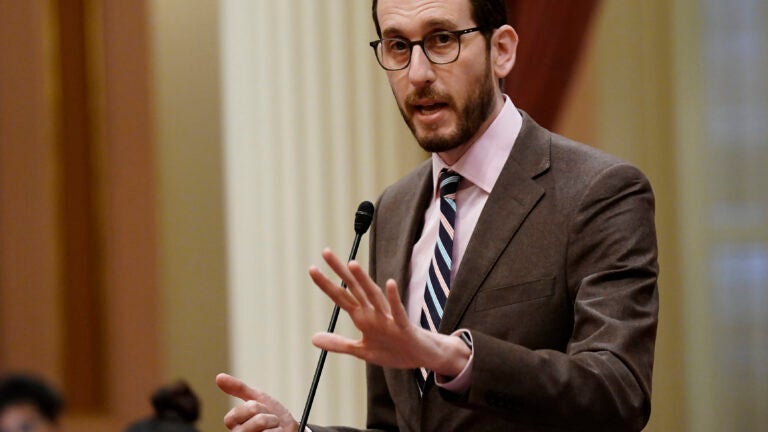 Why California is looking to ban loitering for prostitution arrests