WASHINGTON – A federal judge on Wednesday found a Confederate-flag wielding father and his adult son who breached the U.S. Capitol on Jan. 6, 2021, guilty of obstructing lawmakers as they met to certify President Joe Biden’s 2020 election victory.

U.S. District Judge Trevor McFadden found Kevin Seefried, 52, and Hunter Seefried, 24, guilty of the felony obstruction charge, as well as trespassing and related misdemeanor offenses. His verdict came after a two-day bench trial in which U.S. prosecutors and law enforcement witnesses alleged the men overran police lines and were among the first 15 rioters who broke into the Capitol building.

The group notably pursued U.S. Capitol Police Officer Eugene Goodman toward the chamber of the Senate, with Kevin Seefried shouting, “Where are the members at? Where are they counting the votes?”

The judge found Hunter Seefried not guilty of destruction of federal property worth less than $1,000 for clearing shards of glass and climbing through a window shattered by the first group of rioters.

On the most serious charge, punishable by a statutory maximum sentence of 20 years, McFadden – ruling in a bench trial after the two men waived their right to a jury – found that the Seefrieds had “the requisite intent” to “wrongfully” obstruct lawmakers when they broke into the building, chased police and prompted the evacuation of lawmakers.

“As an initial matter of wrongfulness, things like breaking into a Capitol window, threatening police, and joining a mob that chases an officer through the Capitol are so self-evidently wrong that it requires little further explanation,” said McFadden, a 2017 Trump appointee.

“I find the defendant Kevin Seefried did, in fact, obstruct the certification by his actions,” McFadden said.

McFadden said that while there was “overwhelming video evidence” that events unfolded as prosecutors alleged, whether Hunter Seefried intended to damage property or acted as aggressively as his father was “a closer call.”

Though McFadden acquitted the younger Seefried in connection with the window damage, he said the 24-year-old “knew what he was doing.”

“He joined a mob in the Capitol that was repeatedly yelling, ‘Where are thy hiding? Where are the members at? Where are they counting the votes,'” McFadden said. “It’s not definitive proof, but his decision to continue with the mob is suggestive of his intent.”

McFadden also cited a statement Hunter Seefried gave to the FBI, in which he claimed to have told police, “What’s going on in that room, in that building affects my way of living.”

Goodman – whose actions inside the building that day were captured on a video that went viral – testified in court that Kevin Seefried was the first intruder he encountered during the breach of the Senate Wing Doors on the building’s first floor.

Goodman said the elder Seefried jabbed at him with the butt end of the flagpole and yelled about wanting to know the location of lawmakers. Kevin Seefried told an interviewing FBI agent that he confronted an officer matching Goodman’s description, saying, “You can shoot me, man, but we’re coming in,” according to evidence presented by prosecutors.

A video taken from the crowd shows Kevin Seefried was quickly joined by other angry rioters who pursued Goodman up the stairs. The officer led them away from a hallway that goes to a Senate entrance used by Republicans, staffers and the ceremonial offices of then-Vice President Mike Pence. The group instead followed him toward the Ohio Clock Corridor on the mosaic-tiled floor above. Goodman testified that corridor leads to the main entrance to the Senate, where he knew officers were situated to provide backup.

Prosecutors Brittany Reed and Benet Kearney argued that the Seefrieds were part of the first group of rioters who entered “intent on getting to the Members of Congress.” The group included two highly visible figures who were accused of leading the charge: Douglas Jensen, who wore a black T-shirt emblazoned with an eagle and logo of the QAnon extremist ideology, and so-called QAnon shaman Jacob Chansley, who carried a spear and a bullhorn onto the Senate floor and wore red-white-and-blue face paint and a fur headdress with horns. Jensen faces trial in September; Chansley has pleaded guilty.

Prosecutors played video of Hunter Seefried’s interview with the FBI, in which he said he wanted to support Trump and “stop the steal.”

Similar video showed Kevin Seefried saying he came to Washington to stand up for Trump, and admitting to telling a police officer in the building, “This affects us all.” Prosecutors argued that comment showed his intention to stop lawmakers’ work.

FBI Special Agent Joseph Lear said investigators did not examine Kevin Seefried’s social media communications because he deleted them before he and his son turned themselves in on Jan. 12, 2021.

Nichols set sentencing for father and son on Sept. 16 and 23, respectively. 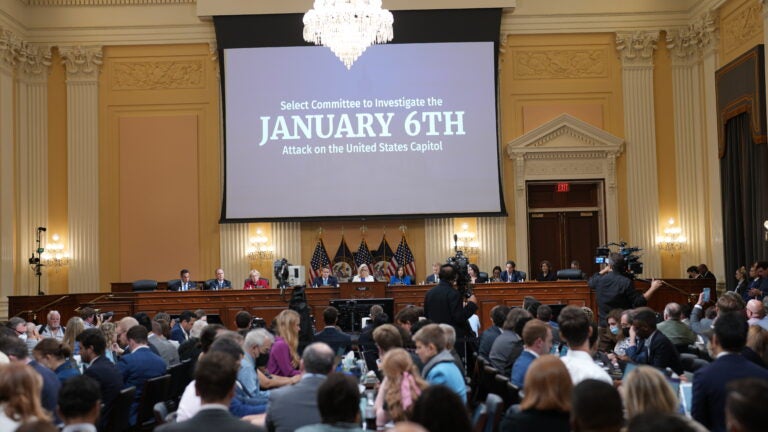