OVERLAND PARK, Kan. – At a recent gathering of abortion rights canvassers in a strip-mall office in this Kansas City suburb, a hand-lettered sign on the wall summed up the confusion over the state’s looming ballot question in two lines – a “no” vote equals support of abortion rights, “yes” means against abortion rights.

Kansans are heading to the polls Aug. 2 to decide whether the state’s constitution protects the right to abortion — the first such constitutional amendment to be determined since the Supreme Court’s historic overturning of Roe v. Wade, ending federal protection, on June 24. More than a dozen Republican states have already moved by other means to ban or further restrict abortion in the wake of the decision that reversed Roe.

The ballot measure, if approved, would effectively overturn a 2019 decision by the state’s Supreme Court enshrining abortion rights in its constitution. The measure could pave the way for the legislature to pass a ban on abortion at a time when Kansas has become a destination for pregnant patients fleeing strict abortion measures in nearby states.

Even though the vote is expected to be close, proponents of abortion rights say they are facing an uphill battle to overcome road blocks they say the Republican legislature has deliberately put in their way – including holding the vote on a primary day rather during the general election, and the convoluted wording of the amendment that has confused many voters.

“When they say on the TV say yes or say no it’s confusing to me,” said Rotonda Johnson, 56, of Wichita. She recently spoke with organizers at Kansans for Constitutional Freedom – a group opposed to the amendment and supportive of abortion rights – and asked for guidance figuring it out. “I had to ask, which way for yes and which way for no? Either way, I don’t think the government should stop abortion.”

The energy around the pitched battle in the state is palpable: As Kansas melted under an oppressive heat wave, canvassers on both sides of the debate have been knocking on doors since beforeearly voting began July 13. “Stop the ban: Vote No” and “Vote Yes!” signs dot lawns, and televisions are buzzing with nearly $2 million in issue ads, according to the tracking company AdImpact.

“The stakes could not be higher,” said Brittany Jones, a spokeswoman for Value Them Both, an antiabortion coalition that includes Kansans for Life, the Kansas Catholic Conference and others who have worked for decades to end abortion in the deeply red state, which has not voted for a Democrat for president since Lyndon B. Johnson.

Value Them Both and other antiabortion advocates – who have knocked on more than 100,000 doors – have taken the public position that the ballot measure will not automatically lead to an outright ban on abortion but, rather, protect what they term reasonable safeguards passed before the state’s high court decision in 2019. Kansas allows abortion up to 22 weeks in pregnancy with additional restrictions such as a mandatory 24-hour waiting period and parental consent for minors.

Kansas University law professor Stephen McAllister, a former clerk for Supreme Court Justice Clarence Thomas who served as the Trump-appointed U.S. attorney for Kansas, said that they are being disingenuous, and the real goal of the amendment is to pave the way for the Republican-led legislature to pass an outright abortion ban in its next session in January.

Jones said this assertion is “absolutely not true.” But the Kansas Reflector, a news website, obtained audio from a meeting in Reno County, Kan., last month at which Republican state Sen. Mark Steffen said that if the amendment passes, the legislature could pass further laws, “with my goal of life starting at conception.” Steffen, a physician, declined to comment.

New voting laws that make it a felony to knowingly impersonate an elections official have had a “chilling” impact on voter registration drives in advance of the election, according to Jacqueline Lightcap, co-president of the League of Women Voters of Kansas. The group normally registers more than 6,000 Kansans in a typical election year but halted its efforts this year out of fear it might – even inadvertently – run afoul of the new law.

Republicans in the state legislature placed the abortion measure on the ballot as a special election alongside the previously scheduled primary, where traditionally only party-affiliated voters are allowed to vote. Many of the state’s unaffiliated voters – about 30% of the electorate – may not be aware they can vote this time, said Davis Hammet, the president and founder of Loud Light, a voter advocacy group, who called the move “blatantly anti-democratic.”

“This is not a persuasion campaign; it’s about trying to inform people this election is even happening and it’s happening in August,” Hammet said.

Kansas has long been at the center of the abortion debate. The state’s laws were once viewed as some of the least-restrictive in the country, prompting the Summer of Mercy antiabortion protests in 1991, when thousands of protesters converged on Wichita and were arrested at sit-ins and clinic blockades.In 2009, George Tiller, one of the country’s few third-trimester abortion providers, was murdered in Wichita by an antiabortion extremist.

In recent years, Kansans have been slightly less supportive of abortion rights than the country as a whole, experts say. For example, an Associated Press VoteCast survey of 2020 election voters in Kansas found that 54 percent said abortion should be illegal in most or all cases, while 44 percent said it should be mostly or always legal, compared with 59 percent nationwide who felt abortion should be legal. Yet the AP survey found that 62 percent of Kansas voters had wanted the Supreme Court to leave Roe v. Wade asit was, while 35 percent said it should be overturned (nationally, 69 percent said the court should leave Roe as it was).

Gabrielle Lara, 23, has been leading the canvassing efforts in the Kansas City area for Students for Life Action, an antiabortion group, since she graduated in May from Benedictine College, a nearby Catholic school. Originally from California, she said she grew up supporting abortion rights in a household where the issue was rarely discussed. But she changed her views after watching a friend endure guilt and shame after an abortion three years ago, she said.

Many of those she has met canvassing in the suburbs of Kansas City have not yet made up their minds, she said.

“There’s a lot of swing voters in certain areas, voters planning to vote the day of and wanting to do more research,” she said. “They have a lot of questions after Roe v. Wade and us being the first state to have a ballot initiative. It’s really kind of a big deal for us here in Kansas.”

Last year, the Kansas Department of Health and Environment released statistics that showed a 9% increase in total abortions from 2019 to 2020, leading to criticism from abortion opponents, who charged that the state was becoming an abortion “sanctuary” led by Democratic Gov. Laura Kelly. Much of that surge was because of short-term pandemic restrictions in clinics in Oklahoma and Texas, officials said. While this year’s preliminary data shows a 4% increase in abortions from 2020 to 2021, the majority of those were from in-state patients, the agency said.

McAllister, the law professor, was the state’s solicitor general in 2017 when he argued in court that abortion was not guaranteed by the state constitution in the case decided in 2019. He said that he believed nearly five decades of federal protection for abortion was settled case law and did not expect Roe to be overturned.

“Where we’re headed with bans and trying to make things crimes, I find appalling and unacceptable,” McAllister said. “The chicanery and trickery that is going on here in Kansas with the amendment disgusts me; people are pretending this is something it’s not.”

The amendment affirms there is no constitutional right to an abortion in Kansas and would “reserve to the people of Kansas, through their elected state legislators, the right to pass laws to regulate abortion, including, but not limited to, in circumstances of pregnancy resulting from rape or incest, or when necessary to save the life of the mother.”

Each woman had been raised in a conservative Christian home and came to their feelings about a woman’s right to choose in their college years, they said.

As Daniel walked, she said she wished that she and others her age had been more mindful of years of warnings that the Supreme Court was going to overturn Roe. She was dubious that Roe, which she considered “settled law,” would fall up until the day it was struck down, she said.

“I learned an important lesson – if people are giving warnings, it’s better to pay attention,” she said.

They met a few uncommitted voters, one man who was a strong yes and Kirsten Sneid, who had donned a Pro Roe shirt to water her garden. Sneid, 62, a registered nurse and former Republican, greeted the sweaty canvassers with hugs and offers of water and Popsicles.

“I think my point is I have no right to tell someone else to do with their body,” Sneid said. “It is appalling to me that we’re looking at state control and the vilification and criminalization of women and the slut shaming and blaming.”

“The whole world is watching us,” Sneid said. “We can do it.” 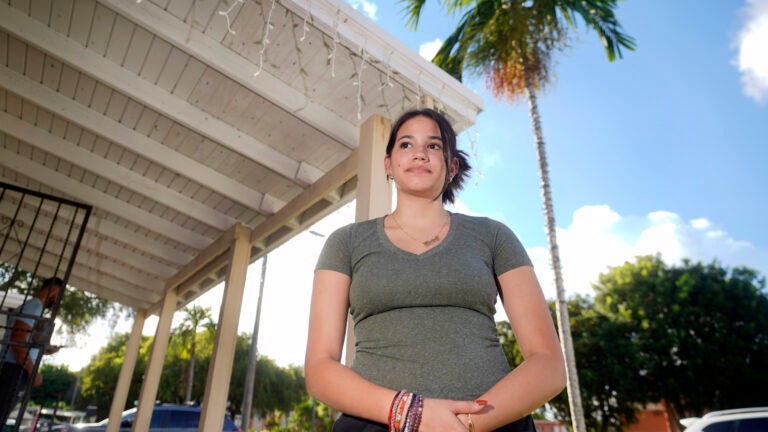