WILMINGTON, Ohio — After an hourslong standoff that closed an interstate and disrupted rural life, law enforcement officers shot and killed a man who they said tried to break into the FBI’s Cincinnati office Thursday.

Ohio authorities declined to confirm the man’s name or describe his motives. But two law enforcement officials familiar with the matter said investigators were looking into whether the man, whom they identified as Ricky Shiffer, had ties to extremist groups, including one that participated in the Jan. 6, 2021, attack on the Capitol.

The day after former President Donald Trump’s private residence in Florida was searched by the FBI, someone with an account bearing Shiffer’s name posted messages on Trump’s social media platform, Truth Social, recommending that “patriots” go to Florida and kill federal agents. On Thursday, the same account also appeared to confess to an attack on the FBI.

The attack in Ohio came three days after agents served a search warrant at Mar-a-Lago, Mr. Trump’s beachfront home and club, and a day after the FBI director told reporters that online threats against federal law enforcement were “deplorable and dangerous.”

The man, who officials said was wearing body armor, tried to breach the entrance to the visitor screening facility outside the FBI Cincinnati field office in the suburb of Kenwood around 9 a.m., said Todd Lindgren, a spokesperson for the bureau. He said an alarm was set off and agents responded.

After fleeing, the man headed north on Interstate 71, officials said, where he was spotted about 20 minutes later by a state trooper at a rest area. That trooper began a chase and came under gunfire, said Lt. Nathan Dennis of the Ohio State Highway Patrol.

The chase eventually left the interstate and snaked along rural roads before coming to a stop near an I-71 overpass close to the city of Wilmington. Dennis said gunfire was exchanged. He said officers tried to negotiate with the man, and then tried to subdue him with less-than-lethal ammunition. Those efforts failed. The man eventually raised a gun, Dennis said, and officers opened fire, fatally wounding him.

The attack came during a week when many Republicans had criticized the FBI for searching Trump’s home, with some calling it a dangerous weaponization of the Justice Department. Some figures on the right also issued broader calls for violence and civil war.

“Unfounded attacks on the integrity of the FBI erode respect for the rule of law and are a grave disservice to the men and women who sacrifice so much to protect others,” Wray said. “Violence and threats against law enforcement, including the FBI, are dangerous and should be deeply concerning to all Americans.”

Federal investigators said they were scrutinizing Shiffer’s social media accounts. On Tuesday, a Truth Social account in the name of @rickywshifferjr posted a message encouraging people to go to Florida, where, as he wrote, “Mar A Lago is.”

“I recommend going, and being Florida, I think the feds won’t break it up,” the message read. “IF they do, kill them.”

Then, on Thursday morning, a message appeared: “If you don’t hear from me, it is true I tried attacking the FBI.”

The New York Times could not immediately confirm whether the account, or other social media accounts, belonged to Shiffer.

A Twitter account under the name of @RickyShiffer expressed approval for far-right group the Proud Boys. Law enforcement officials said they were investigating whether he appeared in a video posted on Facebook on Jan. 5, 2021, showing him attending a pro-Trump rally at Black Lives Matter Plaza in Washington the night before the Capitol was stormed.

In May, the @RickyShiffer Twitter account replied to a photograph of rioters scaling the walls of the Capitol on Jan. 6 with a message that said he was present at the building and that seemed to blame people other than supporters of Trump for the attack.

“I was there,” the message read. “We watched as your goons did that.”

Shiffer was not charged with any crimes in connection with the Jan. 6 attack. At an address in Columbus, Ohio, believed to be linked to Shiffer, police cars were parked outside Thursday evening and crime scene tape was blocking access.

In the rural area where the standoff took place, daily life was thrown into chaos Thursday. For hours, residents of Clinton County, Ohio, watched as police officers swarmed and helicopters hovered overhead. When Rob Thompson left to run errands shortly after 10 a.m., he was greeted at the end of his driveway by a speeding white Ford Crown Victoria being pursued by several police officers.

“I thought, since we are by the interstate, that they were just chasing a speeder,” said Thompson, who said his family had owned and farmed 4,000 acres near Wilmington for three generations.

He soon learned that the man being chased, who stopped about a half-mile from his driveway at the edge of a cornfield, was wanted for trying to breach the FBI office. The tall corn blocked his view of the standoff, but Thompson said he went to the top of his grain bins for a better look.

At the 73 Grill, near the site of the standoff, residents spoke of disrupted days and uneasy moments. Edgar Castillo was preparing for the lunch rush at the grill Thursday — double cheeseburgers are the big draw — when sirens disrupted the typically quiet community.

“I saw a lot of cars and police everywhere, and I didn’t know what was going on, but I had to prepare lunches for delivery,” Castillo said.

Other residents were alerted to the commotion by the Clinton County Emergency Management Agency, which sent texts telling them to shelter in place.

“My boss got out his gun, and we went outside and started watching the cornfields,” said Donna Bowman, who works on a nearby farm. “Because we were told the gunman was hiding in a cornfield, but we didn’t know where.” 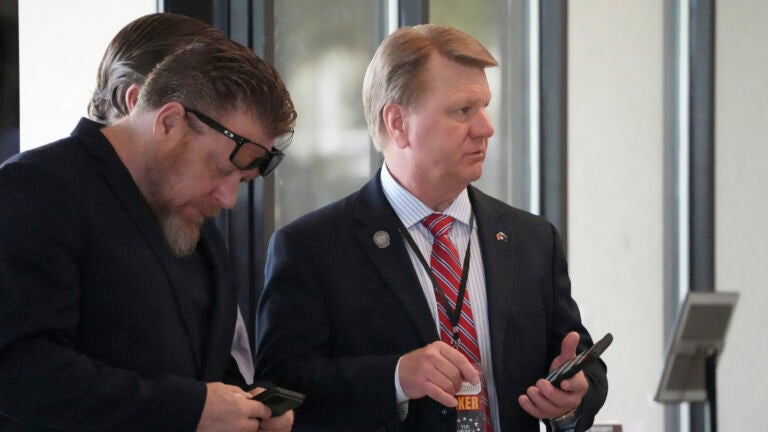