Biden administration officials are racing to prevent a strike by tens of thousands of freight railroad workers that could further disrupt an already strained supply chain and cause billions of dollars in economic damage.

The industry failed to reach a contract agreement with two unions representing much of the workforce, and a federally mandated 30-day “cooling off” period ends Friday, opening a door to strikes and lockouts. Some freight companies have started to limit services, and Amtrak, which carries many travelers on lines operated by freight railroads, said it would cancel some passenger service starting Tuesday.

Labor Secretary Martin Walsh pressured both sides over the weekend to reach an agreement, and administration officials have held dozens of calls with the industry and the unions, according to the Labor Department.

“All parties need to stay at the table, bargain in good faith to resolve outstanding issues and come to an agreement,” the department said in a statement. “The fact that we are already seeing some impacts of contingency planning by railways again demonstrates that a shutdown of our freight rail system is an unacceptable outcome for our economy and the American people, and all parties must work to avoid that.”

The deadlock puts President Joe Biden in a complicated position. His administration has taken pains to restore and fortify the supply chain, which was deeply disrupted by the coronavirus pandemic. It has also worked hard to protect and endorse union rights.

In July, Biden established an emergency board to help mediate the dispute between the industry, which includes six of the largest freight rail carriers, and about a dozen unions. Last month, that board recommended a resolution with a cumulative raise of 24% from 2020 through 2024, including an immediate 14% wage increase covering the first three years.

Most of the unions agreed to the proposal, pending a vote of their membership. But two major unions are holding out for improvements to working conditions, which they say have steadily worsened in recent years as rail carriers have cut staffing.

The Brotherhood of Locomotive Engineers and Trainmen and the SMART Transportation Division, which represent engineers and conductors, say workers must often stay on call for several days at a time, working 12-hour shifts with little notice, and are penalized for calling in sick.

“Our unions remain at the bargaining table and have given the rail carriers a proposal that we would be willing to submit to our members for ratification, but it is the rail carriers that refuse to reach an acceptable agreement,” they said in a joint statement. “In fact, it was abundantly clear from our negotiations over the past few days that the railroads show no intentions of reaching an agreement with our unions.”

Together, the two unions represent nearly half the 115,000 freight rail workers covered by the negotiations. While the unions have not committed to striking on Friday, a walkout remains an option, a spokesman said, noting that more than 99% of participating members of the locomotive engineers union voted in July to authorize a strike.

In an interview on Monday, Dennis Pierce, president of that union, said the unions had just advanced a proposal that included an allowance that workers can take unpaid time off for a doctor’s appointment without being disciplined.

“It’s no longer about money — it’s about unpaid time off to go to the doctor without getting fired,” Pierce said. He added that if the railroad carriers agreed to the proposal, the unions would put it to a vote, which would avert a labor stoppage for at least a few weeks as the count unfolded.

A disruption could be far-reaching, affecting a wide range of goods. Trade groups representing the agricultural industry and manufacturers of consumer products said disruptions would hurt their members and have called on Congress to intervene if necessary.

“Failure to finalize an agreement before the Sept. 16 deadline will hurt U.S. consumers and imperil the availability, affordability and accessibility of everyday essential products,” the Consumer Brands Association, which represents manufacturers of food, beverage, household and personal care products, said in a letter to Biden last week.

In a statement over the weekend, Corey Rosenbusch, the president of the Fertilizer Institute, an industry group, said a potential work stoppage would be “bad news for farmers and food security.”

The Association of American Railroads, a freight rail industry group, said a disruption to service would cost more than $2 billion per day in economic output, idle thousands of trains and result in widespread product shortages and job losses. Rail accounts for about 28% of U.S. freight movement, second only to trucking’s nearly 40%, according to federal data.

More than 460,000 additional trucks would be needed each day to carry the goods otherwise delivered by rail, the American Trucking Associations, another industry group, said in a letter last week asking lawmakers to be prepared to intervene. The trucking industry faces a shortage of 80,000 drivers, so a rail disruption would “create havoc in the supply chain and fuel inflationary pressures across the board,” it said.

In a message on Friday, Steve Bobb, the chief marketing officer of one of the rail carriers, BNSF, encouraged customers to ask Congress to intervene. His counterpart at Norfolk Southern echoed that request to its customers over the weekend, too.

Senator Roger Wicker of Mississippi, the top Republican on the Committee on Commerce, Science and Transportation, said on Friday that he was hopeful that a strike could be averted, but was prepared to act if not.

“The Presidential Emergency Board has put forward a comprehensive and fair set of recommendations that, if adopted, could end this standoff today,” Wicker said. “I will be calling on my colleagues in Congress to join the administration in endorsing these recommendations as written and advance legislation to resolve this dispute if it is clear that a shutdown in rail service is imminent.”

A work stoppage would affect passenger rail, too. Amtrak, the national passenger railroad, owns only 3% of the tracks that its trains use, with the remaining 97% mostly owned and maintained by freight carriers.

Because Amtrak operates most of the tracks along the bustling Northeast Corridor, which runs from Boston to Washington, travel along that stretch would be generally unaffected, it said in a statement. But the railroad said it would cancel three long-distance routes starting on Tuesday, in preparation for a freight rail disruption, which it said could “significantly impact intercity passenger rail service.” 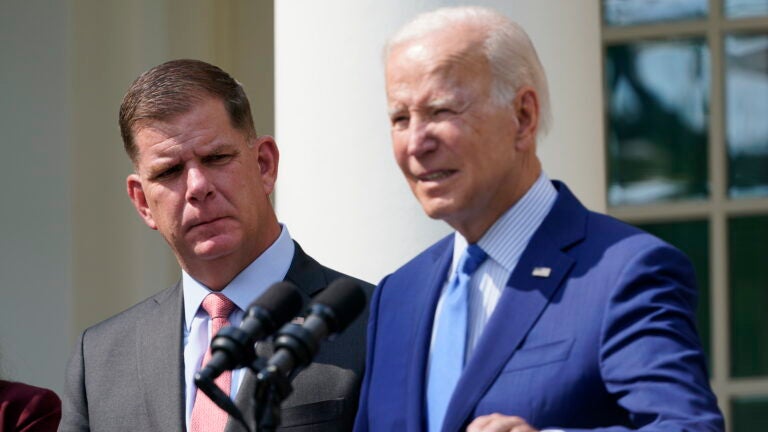