FOXBOROUGH, Mass. (AP) — The Patriots picked up two new targets for Tom Brady — or whoever is playing quarterback for them when the season starts — while also adding a lineman with a long football pedigree on Day 3 of the NFL draft.

Illinois guard Ted Karras is the grand-nephew of Pro Bowl defensive lineman Alex Karras and also the son and grandson of NFL players. In all, seven members of the Karras family played football in the Big Ten and four went on to NFL careers.

“We’re a tough family. Everyone’s been an interior lineman,” Karras said in a conference call with Patriots reporters. “I knew I was going to be a lineman early. I knew from an early age … my first number was in the 60s. It was pretty predetermined.”

Karras was the Patriots’ sixth-round pick (No. 221 overall) on Day 3, when the team also added two receivers and two linebackers. Coach Bill Belichick brushed off the suggestion that Karras would be better prepared for the NFL having come from a family of football players — but not as dismissive as he was when asked about the recent federal court ruling that reinstated Brady’s four-game “Deflategate” suspension.

Belichick only cracked a smile when asked about an undrafted free agent who said on social media that he would sign with the Patriots.

“I haven’t seen ‘Snapface’ or whatever’s on there,” he said. “Regardless of what’s on there, we have to go through the league office.”

The Patriots started off the day by taking Georgia receiver Malcolm Mitchell, who also returned punts for the Bulldogs.

Then they began dealing.

The Patriots had lost a 2017 fourth-rounder in the Deflategate punishment that also cost them their first-rounder this year.

With the No. 208 pick, New England took Eastern Illinois safety Kamu Grugier-Hill. At No. 214, the team picked up Houston linebacker Elandon Roberts. The Patriots grabbed Karras with the last of their three sixth-round picks and then got Arizona State receiver Devin Lucien in the seventh.

The Patriots entered the final day with eight picks, including five in the sixth round, but wound up picking five players. Player personnel boss Nick Caserio said on Friday night that the team might not even have space on the roster for all the selections. 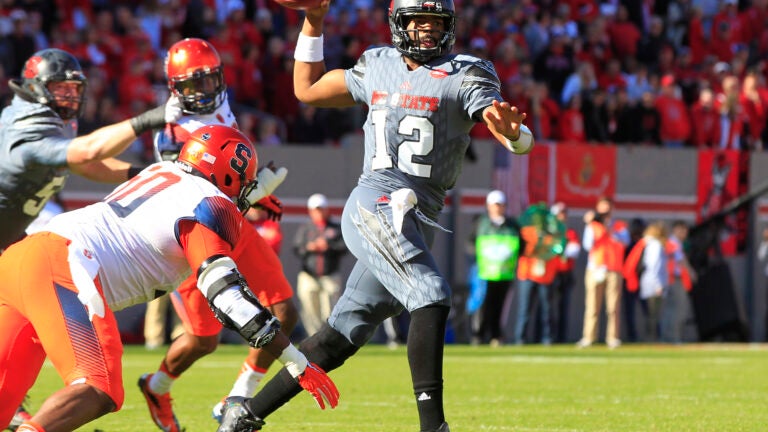