As activists and politicians urge the U.S. to boycott the 2022 Winter Olympics in Beijing as a way of protesting human rights violations happening in China, Utah Sen. Mitt Romney proposed an alternative plan.

“Prohibiting our athletes from competing in China is the easy, but wrong, answer,” Romney wrote in a New York Times op-ed published on Monday. “Our athletes have trained their entire lives for this competition and have primed their abilities to peak in 2022.”

The former Massachusetts Governor said the right approach is “an economic and diplomatic boycott” of the event slated for next February.

“American spectators — other than families of our athletes and coaches — should stay at home, preventing us from contributing to the enormous revenues the Chinese Communist Party will raise from hotels, meals, and tickets,” he explained. “American corporations that routinely send large groups of their customers and associates to the Games should send them to U.S. venues instead.”

Reduce China’s revenues, shut down their propaganda, and expose their abuses. An economic and diplomatic boycott of the Beijing Olympics—while letting athletes compete—is the right answer. https://t.co/JELBoARpf3

“China deserves our condemnation,” the senator wrote. He noted how the Chinese Communist Party has gone back on its promise to allow Hong Kong self rule, suppressed peaceful demonstrators, incarcerated journalists, and launched a campaign — which has been described as genocide — to forcibly assimilate the Uighur people, a mostly Muslim ethnic minority group in Xinjiang.

“Uighur women are forcefully sterilized or impregnated by Han Chinese men. Adults, ripped from their families, are sentenced into forced labor and concentration camps,” Romney said. “Among ethnic Chinese, access to uncensored broadcast news and social media is prohibited. Citizens are surveilled, spied upon and penalized for attending religious services or expressing dissent.”

Some have called for the International Olympic Committee to move the 2022 games out of Beijing, but Romney, who helped organize the Salt Lake City Games in 2002, said it’s too late to relocate.

As part of his alternative boycott, Romney called on President Biden to invite Chinese dissidents, religious leaders, and ethnic minorities to represent the U.S. at the Beijing games in place of traditional diplomats and White House officials.

It’s also crucial to collaborate with NBC, the American TV network with the rights to broadcast the event and a media outlet that has “already done important work to reveal the reality of the Chinese Communist Party’s repression and brutality,” according to the senator.

“NBC can refrain from showing any jingoistic elements of the opening and closing ceremonies and instead broadcast documented reports of China’s abuses,” he wrote in the op-ed.

Texas Republican Senator Ted Cruz wrote his own op-ed published by Fox News on Monday, detailing how following through with a full-out boycott would be a case of history repeating itself.

Cruz nodded to 1980, when President Jimmy Carter’s Olympic boycott against the Soviet Union kept hundreds of American athletes from competing.

“As anyone who has ever faced down a bully knows, when you decide to hide and not to fight, the bully wins,” Cruz wrote. “Our athletes should go to Beijing next year proudly, bring home medal after medal, and show the world what it means to compete on behalf of a free society.”

In the meantime, Romney encouraged Americans to spread the word and help ignite the economic boycott.

“America and the nations of the free world need to have a heart-to-heart with the International Olympic Committee,” he wrote. “The I.O.C. has hoped that awarding Games to repressive regimes would tend to lessen their abuses. But hope has too often met a different reality — in Hitler’s Germany, Putin’s Russia and Xi’s China. In authoritarian states, the Olympics has more often been a tool of propaganda than a lever of reform.” 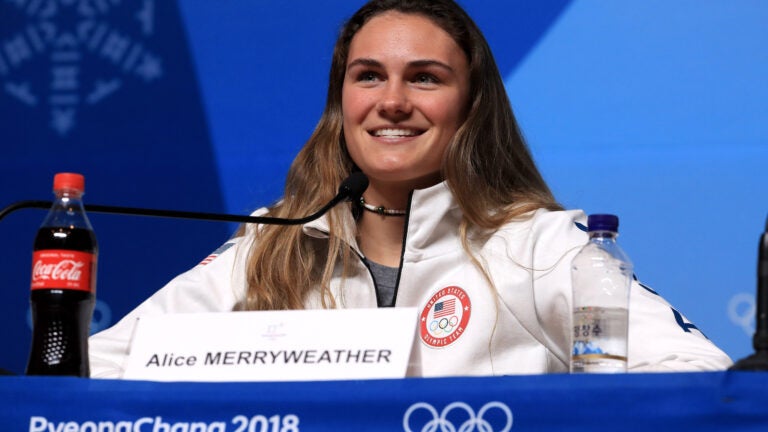 An Olympic skier from Hingham’s battle with anorexia: ‘I didn’t really realize I had a problem’