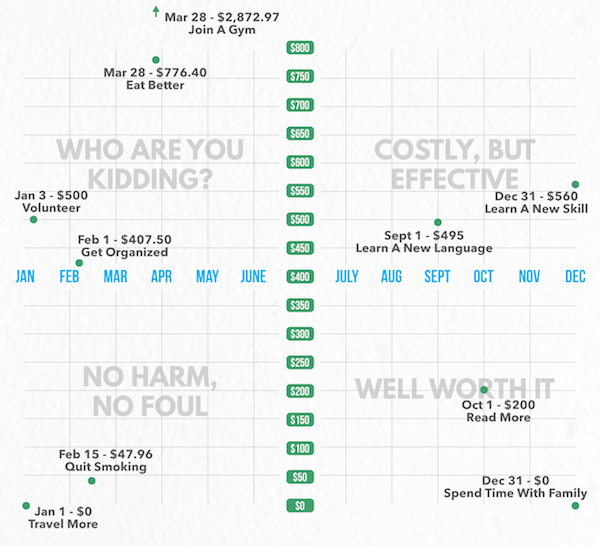 The pressure that comes with making and keeping resolutions at the end of the year is huge: Will you succeed and become a better version of yourself? Or will even the best intentions fall by the wayside, destined for the graveyard of shattered dreams?

Here’s a list of some common New Year’s resolutions, complete with handy calculations about how long you can expect them to last and how much they’ll cost you, so you can know what to expect when you’re improving.

Some are wildly expensive and come with a low follow-through rate, while others are pretty easy to follow and won’t break the bank. Refer to our handy graph to find out which resolutions will offer the most bang for your buck and which you should just give up on before you even start.

How long it will last: The longevity of this resolution falls into two categories. You can either draw a very hard line: “I will never eat a single carb again for as long as I live.’’ Or you can be a bit more nebulous about it, saying “I will eat more healthily this year.’’

If you’re serious about eating well, you should probably stick to the first strategy, because you can easily rationalize your way out of the second. For example: “These nachos are healthy because they come with beans, and beans are a protein,’’ or “Buffalo wings with blue cheese are fine because of the celery, and chicken is protein,’’ or “I read this study that dark chocolate is really good for you in large quantities. And who knows, it might be a protein.’’

If you’re adhering to the former, you will probably be done by March. Especially in New England: March is the month that never ends. It’s still cold, but every once in a while you get teased with a hint of spring (a whiff of mulch, a foggy rain) before 13 inches of snow descend upon the world. Everyone is miserable all the time; if ever there were a day to start eating your feelings, it would be somewhere around the 28th—and that’s being optimistic.

The second strategy will last you all year: “I’ve heard beer actually strengthens bones, so yes, I will have another.’’ It’s a brilliant loophole of a resolution; if you want to be able to say you stuck to something in 2015, take this route.

How much money it will cost you: For a single woman between the ages of 19-50, the moderate-cost plan of buying groceries and cooking for yourself (the only real way to eat well, aside from hiring a personal chef) put forth by the USDA costs $258.80 per month, so if you make it through most of March, it’ll run you $776.40. If you opt for “eating healthily’’ then there will very little change in your spending. It could even increase if you keep ordering from the Chinese place down the street like you have been (General Tso’s chicken is definitely a protein).

How long it will last: Jan. 2 is like the rapture of gym membership sales. Those looking to make a change rise up, shell out, and attach the little fob to their keychains, while the lazy are left behind on their couches, frozen in time with a Cool Ranch Dorito halfway to their mouths.

However, the working out will end around the same time the healthy eating resolution goes out the window (March 28), and for the same reasons. Why move around when you can wrap yourself in a blanket and binge-watch Nic Cage movies on Netflix?

The cost: You’re more likely to buy a membership to a nice gym, like Equinox, under the mistaken impression that if you’re paying a lot, you’ll actually go to make it worth it. You’ll be wrong, but it’ll cost you $397.97 in sign-up fees for your first month. If you pay the bill for 12 months (and never go), you’ll be down $2,872.97.

How long it will last: Your success rate on this one correlates directly to how much you like your family. If seeing them is as unpleasant as the photos of you from middle school they have hanging on the walls, you’re likely to fall off after the first few Sunday night dinners you schedule. The middle of February would be generous, but in reality it will be more like late January when you realize there’s a reason you never saw them before, and that absence really does make the heart grow fonder.

But if you like your family and they like you back, this is a great resolution and can last the whole year. All it takes is a little planning (Gcal invites are very useful, assuming your older family members can figure out how to accept them) to log more time. Or you could, you know, call them.

The cost: If you go to a relative’s house for dinner, you won’t have to spend money to feed yourself or anyone else who depends on you for dinner that night. But you’ll want to bring a bottle of wine or some flowers or something, so let’s call this one a wash: $0

How long it will last: This one is likely going to be a slow fade. After you’ve bought the requisite Pimsleur Mandarin Chinese CDs, you’ll listen to them in the car on the way to work religiously for a month. You’ll listen less frequently throughout February, March, April, and May, and then maybe once or twice in June, July, and August. By September most of the CDs will be floating around the floor of your car with your unpaid parking tickets, scratched beyond repair, but you’ll at least be able to ask where the bathroom is if you ever make it to Beijing. By November you’ll be using the CDs as coasters, and by December your significant other, mom, or child will make you throw them away. You will then buy the box set again, and repeat the cycle in 2016—this time in Portuguese.

How long it will last: Yes, you know smoking is bad for you (your kids went through D.A.R.E and make a point to tell you early and often), but it’s also addictive, so you’ve never had much luck stopping. But 2015 will be your year; you’ve bought two boxes of Nicoderm CQ patches and promised your wife you’re going to quit cold turkey. Then one of your kids will back your new car into someone else’s new fence around the third week of January and you’ll stop to buy a pack of Parliaments on your way to the police station.

How long it will last: You always liked pottery in college, when you messed around on the wheel because the girl you had a crush on was in pottery club and you harbored fantasies of a “Ghost’’-like romance. She was decidedly uninterested, but you did come away with some great (let’s be serious, they were terrible) Christmas presents in clay form for your family. So when it comes to self-improvement, you’ll sign up for a class at Feet of Clay in Brookline, and you’ll once again discover that you were born to mold. You’ll then sign up for another one, (and then maybe another), until everyone you know is drinking out of hand-thrown mugs. This is a resolution you will keep all year.

The cost: $560 for two class packages (which include group instruction, clay, glazes, and firing).

How long it will last: This depends on whether you can read or not. If you can, it will last as long as you force yourself to sit down with a book, so probably through summer and until it gets chilly in October, as reading outside is one of life’s simple pleasures. After that, you’ll probably slack off, and come all the holiday parties in December, you’ll have very little time to finish reading “How to Read a Book.’’ If you can’t read, this resolution is moot, as is everything else on this page. It’s wild that you’ve made it this far.

The cost: You’ll buy yourself a standard Kindle in the hopes that it’ll make this plan easier to follow, so $79. If you buy yourself a Kindle fire it’ll cost you $99 and you won’t read at all, you’ll just watch movies. You’ll also buy physical books when you forget that your Kindle does anything other than stream Netflix, so let’s just say this will run you around $200.

How long it will last: This is the year you’ll finally make it to Morocco, you tell yourself. You’ll block off vacation time for October, Google “are there camels in morocco,’’ and then post on your Facebook page about how you can’t wait to see a camel in Morocco. But when you get your credit card bill for December, you’ll delete the post and resign yourself to spending yet another Columbus day watching camels drinking coke on YouTube.

The cost: $0 and a little bit of your pride.

How long it will last: You won’t make it past Jan. 3. You’ll sign up to get the newsletters from many charitable organizations and then never go to any of the events.

The cost: $500—the amount you end up donating to the local animal shelter out of guilt in December once you realized you never even took a dog for a walk.

How long it will last: You might eek it out to February. You’ll go nuts at The Container Store, buying storage solutions for everything from the belts in your closet to the pistachios in your pantry. You’ll label everything and put things where they go for a month until you realize it makes you feel like you’re living in a fourth grade classroom, when you’ll stop.