On to Beacon Hill, as Bill Belichick would say.

Three members of the New England Patriots are headed to the Massachusetts State House to voice support for a bill that would overhaul how the state’s public schools are funded. Defensive captain and safety Devin McCourty, cornerback Jason McCourty, and safety Duron Harmon — all three of whom are members of the Players Coalition, an advocacy group of NFL players focused on social justice and racial equality — will testify before a joint committee of state senators and representatives about why they’re backing the Education PROMISE Act.

The bill, sponsored by Sen. Sonia Chang-Diaz, would boost education spending in Massachusetts by more than a billion dollars a year, by increasing funding for school employee health care costs and special education services, as well as the base rate of funding districts get for low-income students and English language learners — as recommended by a 2015 state commission.

While the Bay State’s public education system has been ranked No. 1 in the country, there remain wide disparities between rich and poor communities. In 2015, the Foundation Budget Review Commission found that the state’s school district financing formula was underfunding the three aforementioned areas: health care, special education, and low-income and English language learners.

Republican Gov. Charlie Baker has also put forward a proposal to increase education spending, but Chang-Diaz, a Jamaica Plain Democrat, says it falls short. And apparently, the McCourty brothers and Harmon agree. In a statement, the Players Coalition said the PROMISE Act is “the only bill” that would fully implement the recommendations of the FBRC “and the only bill that will produce the effective, equitable education finance reform our kids desperately need.”

“What is the message we want to send to our most vulnerable students in our most impoverished communities?” the three players wrote in a Medium post last July.

“Do we use the best available knowledge to do our best to improve the foundation of all of our children?” they continued. “Or do we tell our children to sit and wait while we do more research? The state has already invested significant resources in the FBRC, a committee of key stakeholders. If we are complacent, will our children in less affluent circumstances fall farther and farther behind? All of our children deserve an equal chance at success regardless of their economic backgrounds. Shouldn’t our policies reflect that?”

Last yr we supported an Education Bill to stop underfunding our schools. It unanimously passed the Senate – but time ran out in negotiations. Well, it’s back now in the PROMISE Act. We can’t fail our kids again. Read our piece on this from last June (Jmac) https://t.co/ulr0osrWjo

For Devin McCourty, the hearing Friday won’t be his first trip to the State House. The 31-year-old safety has also been a vocal advocate for criminal justice reform, lobbying Beacon Hill lawmakers last March and co-authoring an op-ed in The Boston Globe in support of a bill Baker signed into law in April.

McCourty and fellow Players Coalition members have since been invoking the Patriots mantra to get the governor to act on their preferred education reforms as well.

“Our children should not wait any longer,” the McCourty brothers and Slater wrote last summer. “As adults, let’s ‘do our job’ and set all of our children up for success.” 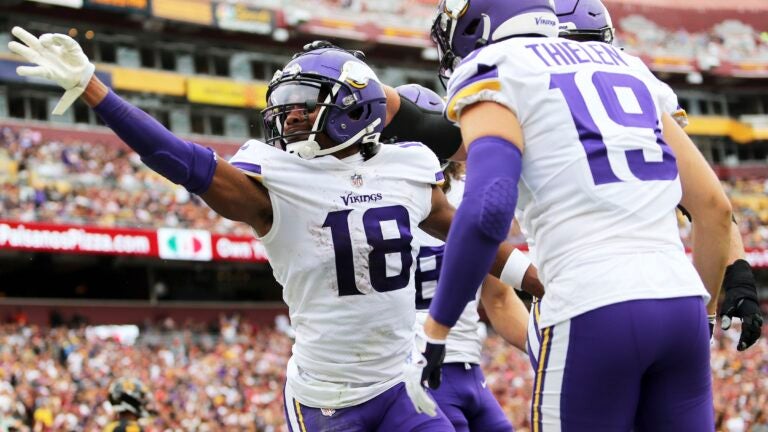 5 Minnesota Vikings players to watch against the Patriots on Thanksgiving