The U.S. Supreme Court’s decision to examine a New York law barring people from carrying guns outside their homes could weaken state-level efforts to curb violence after a slew of mass shootings.

Nearly a decade after the highest court issued its last major gun-rights decision, it voted on Monday to consider a challenge to laws barring most people from carrying handguns in public. The court said it would take up the case during the nine-month term that starts in October. The appeal is backed by the New York State Rifle & Pistol Association, a National Rifle Association affiliate, and two individuals who say the state has violated their rights by issuing concealed-carry licenses only to those showing a special need.

The announcement Monday drew angst from New York City’s mayor and gun-control advocates in eight states with large cities that would be most affected by a court decision expanding right-to-carry laws after a yearlong spike in urban violence.

New York is one of the states — along with California, Massachusetts, New Jersey, Maryland, Rhode Island, Delaware and Hawaii — that the National Rifle Association says prevent most people from getting a carry license. Illinois and the District of Columbia also had sharp restrictions before their laws were invalidated in court.

Massachusetts, in fact, has some of the country’s most stringent gun-control laws. It is one of three so-called “license to own” states, where a person must have a valid license to legally possess a gun, and first-time applicants must take a safety course. Police chiefs serve as licensing authorities, giving them wide discretion over who can own a gun.

Less than 17% of Massachusetts residents who responded to a March Suffolk University/Boston Globe poll said they had a gun. But of those who don’t, about one in seven said they wished they did, underscoring the anxiety of some who say they have tried to buy a weapon for the first time amid the pandemic.

The case “could absolutely affect and possibly change what is the law in Massachusetts,” said Jason Guida, a lawyer who specializes in firearms law. If the court decides the right to carry a gun outside the home is equivalent to inside the home, it could lead to challenges of local policies allowing police to deny gun licenses for behavior they deem a risk, such as substance abuse, criminal charges not resulting in a conviction, or mental health issues, he said.

In New York City, 328 shootings by April 18 outpaced last year’s level by 64% despite tens of millions of dollars spent on police training and community-based anti-violence teams. Mayor Bill de Blasio, D, who attributes the increase to a pandemic-related breakdown in social cohesion, said that his “heart sank” when he heard about the Supreme Court’s review.

“We’ve come so far to try to keep guns out of the hands of New Yorkers, particularly young people, and the Supreme Court, it looks like they’re working overtime to put guns right back in those hands,” de Blasio said Monday. “That really worries me.”

Aside from national increases in gang-related shootings in cities, the U.S. has experienced four mass killings since March 16, including at a supermarket in Colorado and day spas in the Atlanta area. The deaths have spurred renewed calls for federal gun control.

“We already have a concerted focus on reducing shootings in New York City; adding more guns to our streets is not the answer to reducing violence,” said New York Police Commissioner Dermot Shea in an email. “The NYPD should continue to be able to set and regulate the conditions that must be met to legally carry a loaded firearm in our streets.”

The high court’s review comes as New Jersey, with some of the nation’s tightest gun-control laws, is moving toward enacting further restrictions unveiled April 15 by Gov. Phil Murphy, D. Among the proposals: The state would require safety training prior to a firearm purchase, mandate locked storage at home and raise the age to 21, from 18, for purchase of shotguns and rifles.

In Delaware, where voters recently elected several progressive lawmakers to the General Assembly, lawmakers are considering bills to require a training course for a handgun permit and a ban on magazines holding more than 17 bullets. The efforts, announced in late March, followed a call by President Joe Biden — a former U.S. senator from the state — for Congress to pass gun restrictions in response to the recent mass shootings.

The Supreme Court in June refused to take up challenges to the New Jersey, Massachusetts and Maryland laws. That was before Justice Ruth Bader Ginsburg’s death and former President Donald Trump’s successful nomination of Justice Amy Coney Barrett, which strengthened the court’s conservative majority. Four justices must agree for the court to take up a case. The restrictions have created a split among federal appeals courts, a dynamic that often prompts the Supreme Court to intervene.

The court has never said whether the Second Amendment applies outside the home.

“This sets the stage for the Supreme Court to affirm what most states already hold as true, that there is an individual right to self-defense outside of the home,” the National Rifle Association said in an email. “It’s hard to overstate how important this case is.”

Eric Tirschwell, a lawyer with Everytown for Gun Safety Support Fund, said the recent increase in firearm violence made the stakes especially high. “A ruling that opened the door to weakening our gun laws could make it even harder for cities and states to grapple with this public health crisis,” Tirschwell said in an email. 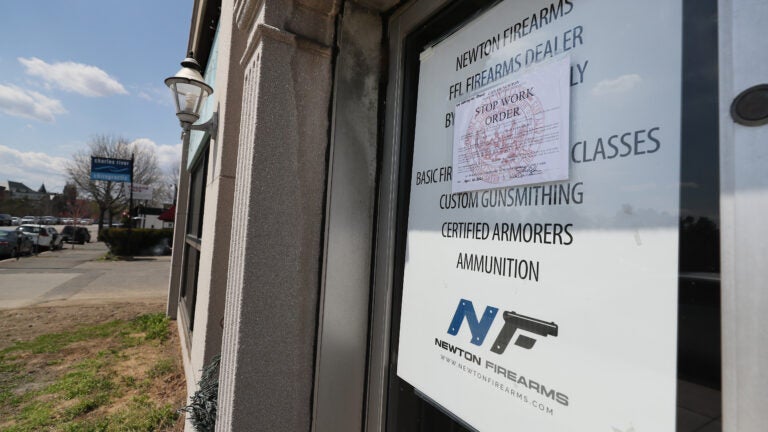