“Mitt Romney talks a lot about all the things he’s fixed,’’ Patrick told delegates at the Democratic National Convention. “I can tell you Massachusetts was not one of them.’’

Seeking to fire up the party faithful, Patrick spoke with greater fervor and edge than normal. His voice rising passionately, his face bathed in sweat, Patrick repeatedly exhorted the crowd to its feet.

The heart of the speech — and the portion that pumped the crowd into a signature, pitched moment — was a call to action. “It’s time for Democrats.’’ he said, pounding the lectern, “to grow a backbone and stand up for what we believe.’’

Patrick was among a roster of Democratic governors taking shots at Romney throughout the evening. But his remarks, coming from Romney’s home turf, packed import.

Patrick has been performing a similar role in front of Democratic groups throughout the country, energizing party activists, increasing his visibility, and raising money for his political action committee.

Tuesday night was an opportunity to showcase his close-up critique of Romney to a larger audience. He called Romney “a fine fellow and a great salesman,’’ while adding that “as governor, he was a lot more interested in having a job than doing the job.’’ The lines were more typical of Patrick, highly critical without sounding personal or angry, while offering a backhanded compliment.

Patrick then listed a series of problems stemming from Romney’s tenure from 2003 through 2007: that Massachusetts was 47th in job creation; that household income was declining; that education was cut “deeper than anywhere else in America;’’ that “roads and bridges were crumbling;’’ and that the state was left with a structural budget deficit.

The speech was a stark contrast to Romney’s vision of his tenure, including turning a budget deficit into a surplus and holding the line on taxes.

The Romney campaign responded even as Patrick spoke, citing a state unemployment rate that fell from 5.6 percent to 4.7 percent in the Romney years and a rainy day fund that stood at $2 billion at the end of his term. The Romney memo pointed out that Massachusetts, under Patrick, now has more than 200,000 unemployed workers and a shrinking rainy day fund.

But Patrick was eager to draw his own comparisons between the Romney years and his own 5½ years as governor, an indication that Patrick may be aiming for higher office, as some observers speculate. Patrick, appearing on cable news Tuesday morning, offered coy answers about his own national political aspirations: “I don’t have any plans,’’ he said.

During Tuesday’s address, Patrick listed numerous accomplishments, including investment in roads, bridges, and the biotech industry. He also talked about curbing public workers’ collective bargaining rights, “with labor at the table,’’ a contrast to the uproar such fights caused in Republican-controlled states, particularly Wisconsin.

The speech included other core Democratic beliefs, including such social issues as abortion rights and gay marriage, which drew some of the loudest applause.

Patrick then listed Obama’s major accomplishments, including the repeal of the military’s ban on gays serving openly, the health care law, the killing of Osama Bin Laden, and the auto industry bailout.

“The list of accomplishments is long, impressive, and barely told,’’ he said, with emphasis on the final words. “And even more impressive when you consider that congressional Republicans have made obstruction itself the centerpiece of their governing strategy.

“With a record like that and a vision that hopeful and powerful, I for one will not stand by and let him be bullied out of office,’’ Patrick said. “And neither should you.’’

As the crowd swelled in applause, Patrick ended his speech with a rapid call for activists to canvass voters and work in phone banks and “tell everyone we meet, that when the American dream is on the line, we want Barack Obama in charge.’’ 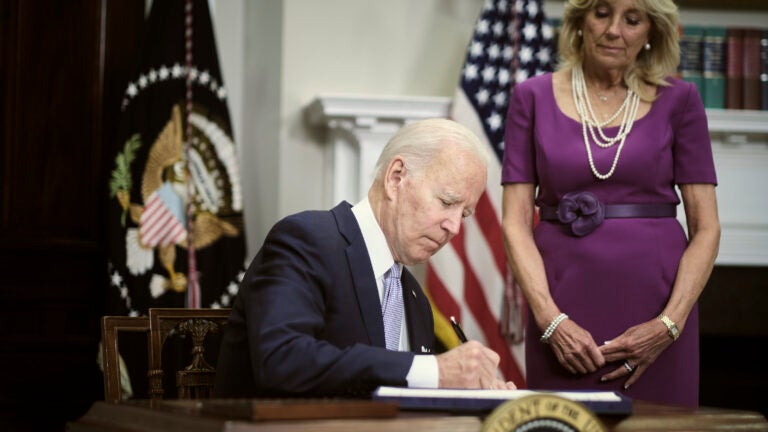