Massachusetts Governor Deval Patrick has seen his fair share of successes and challenges during his tenure. Here’s a look at some of the highlights of his service. On Jan. 4, 2007, Deval Patrick became the first African-American governor of Massachusetts. He was sworn in by then-state Senate President Robert Travaglini, with his wife Diane holding the Bible. Patrick—seen here shaking hands with Speaker of the House Robert DeLeo—oversaw the implementation of the state’s 2006 health care reform program, which had been enacted under his Republican predecessor, Mitt Romney. 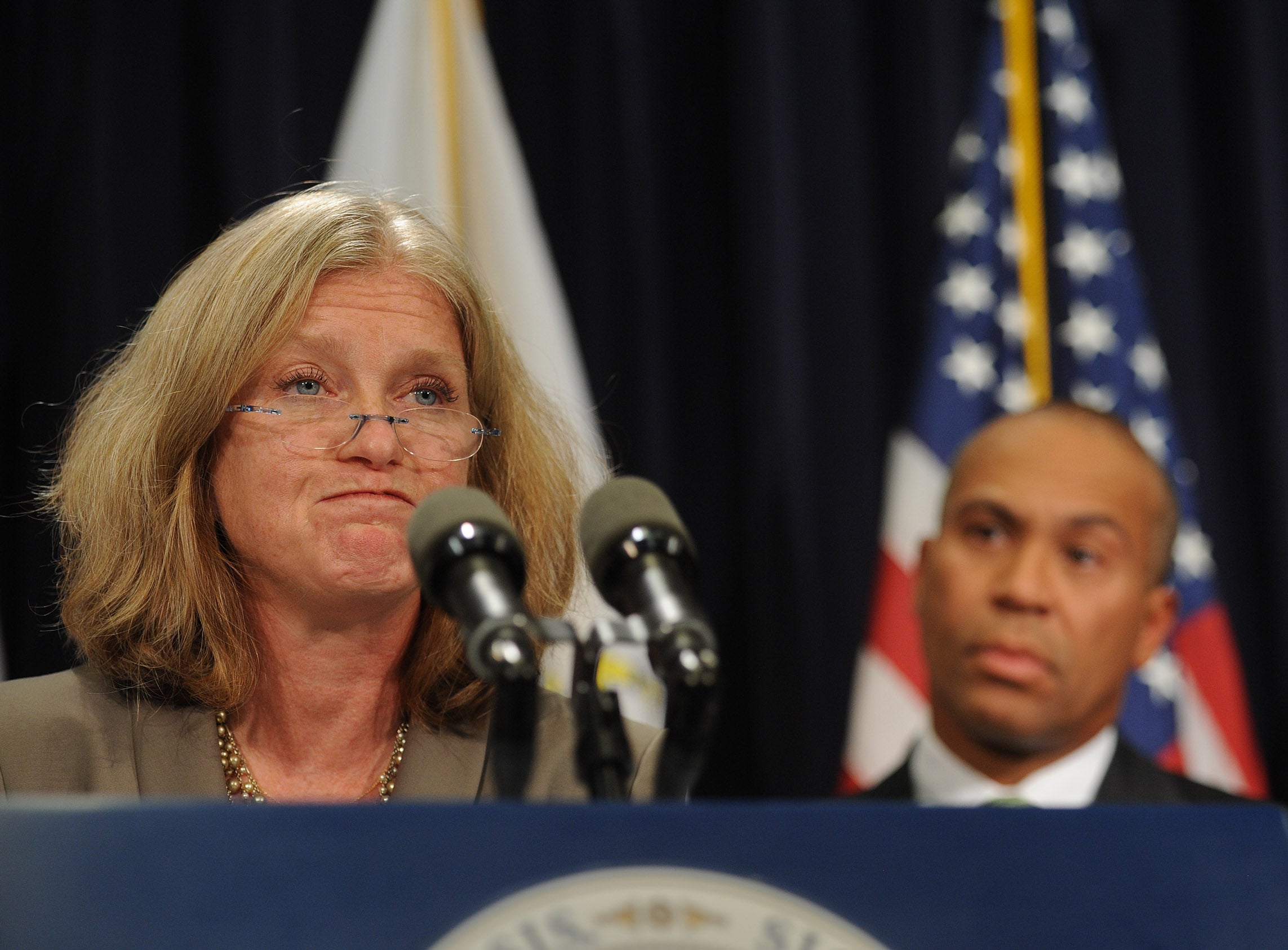 In 2012, a national fungal meningitis outbreak was linked to a Framingham-based pharmaceutical compounding company, the New England Compounding Center. As a result, Gov. Patrick enacted random inspections at compounding facilities across the state and proposed additional state funding to hire more pharmacy inspectors.

Pictured: Madeleine Biondolillo, director of DPH Bureau of Health Care Safety held a press conference on October 2012 regarding the meningitis outbreak and the findings of the Commonwealth into compounding pharmacies. 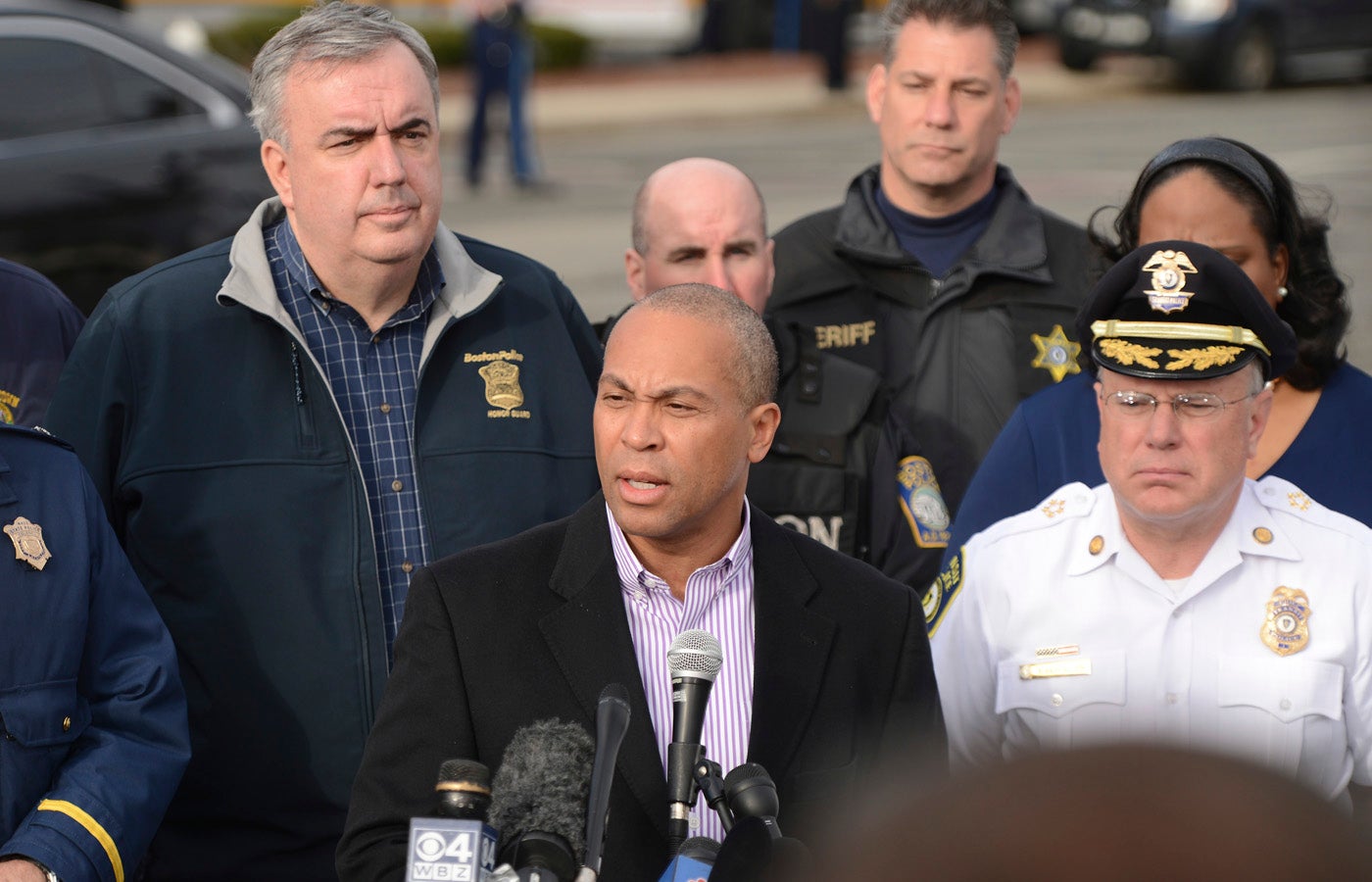 Patrick was one of many figures the public turned to after bombs were detonated near the finish line at the 2013 Boston Marathon. Nearly a week later, state and federal law enforcement embarked on a manhunt to capture the bombing suspects. Patrick ordered people in Boston and surrounding neighborhoods to stay indoors while the manhunt ensued. 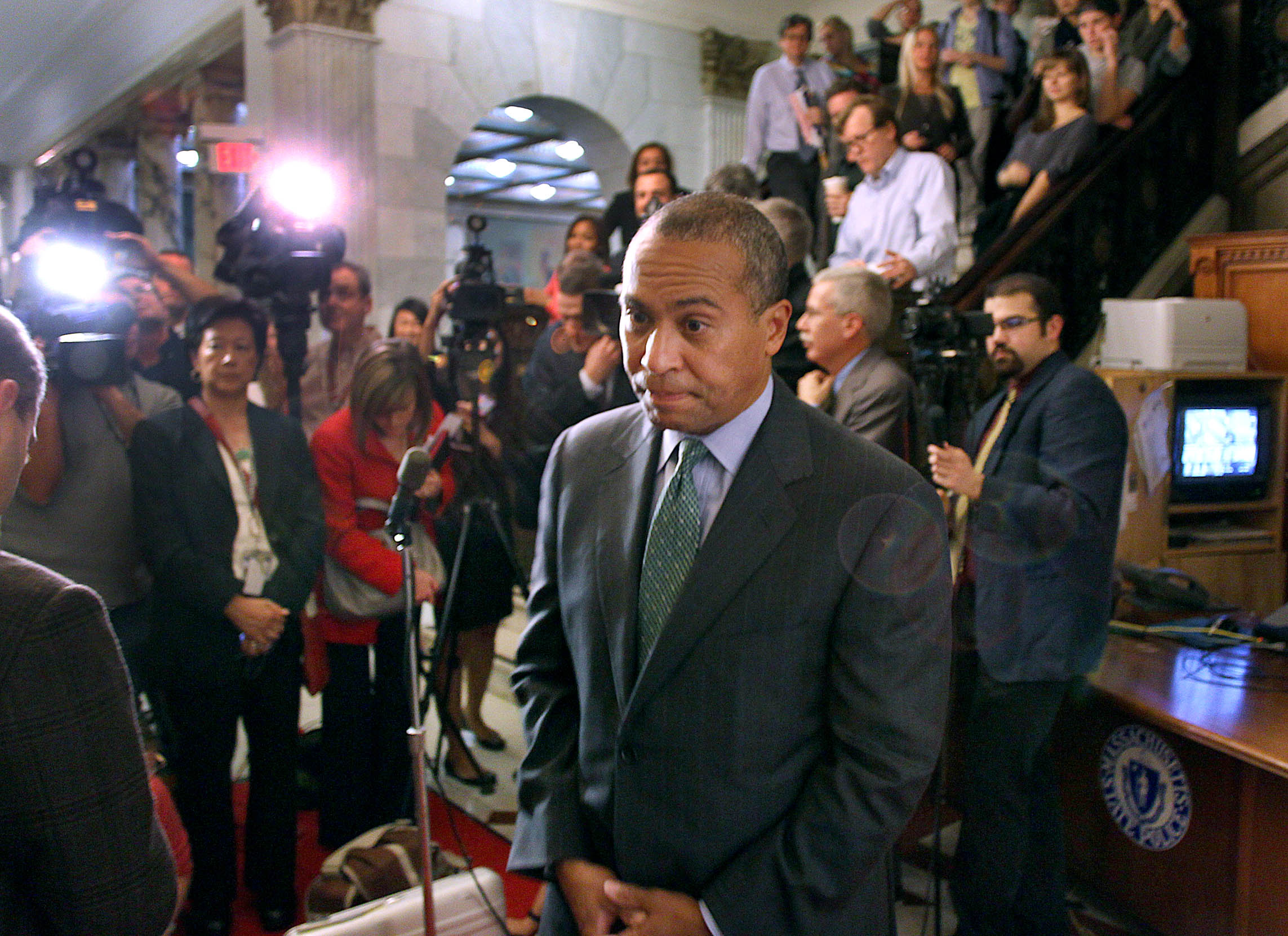 The State of Casinos

Throughout his tenure, Gov. Patrick has seen the state through the ups and downs of proposed casinos.

He invited the casino industry to Massachusetts in 2007 with a proposal for three resort-style casinos in the state, saying, “Casino gambling is neither a cure-all nor the end of civilization. Under certain conditions, I believe casinos can work well in and for the Commonwealth.’’

In a compromise bill passed in 2011, three casinos and one slots parlor were approved to be licensed.

Pictured: Gov. Patrick walked back to his office after talking to reporters outside his State House office about the compromise casino gambling bill. In July 2014, Patrick said he was looking for ways to temporarily house children who had illegally crossed the US-Mexico border, and then defended his plan against criticism. Camp Edwards, a military base on Cape Cod, was one of the locations under consideration, but local officials rejected the proposal. In the final weeks of his tenure, Patrick has had to handle one of the largest public health concerns in decades. Cases of Ebola, an infectious disease with roots in West Africa, began to emerge in the US. While there were no confirmed cases in Massachusetts, the state faced two Ebola scares.

Patrick worked with state health and public safety officials to reassure the public that residents of Massachusetts were at low risk of contracting the disease. Unlike some nearby states, Massachusetts under Patrick’s guidance chose not to implement amandatory quarantine for state health workers returning from Ebola-stricken countries in West Africa. 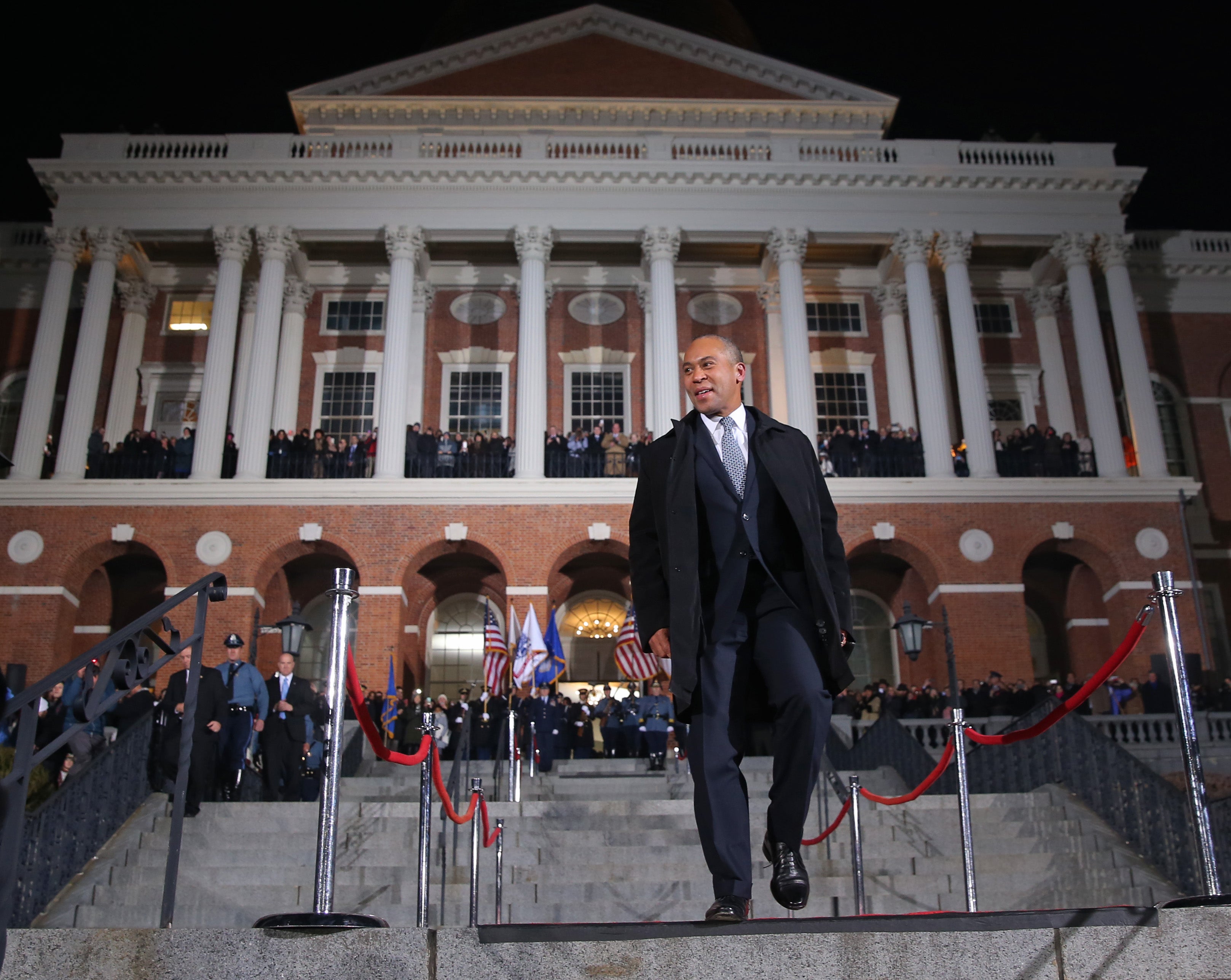 On Jan. 7, 2015, after a private meeting with incoming Governor-elect Charlie Baker, Patrick took the ceremonial “Lone Walk’’ out of the State House in a ceremony steeped in tradition.

‘‘It’s been a great run,’’ Patrick told reporters before the ceremony. ‘‘We’ve had a really productive eight years. I’m proud of the record. I’m proud of the foundation that we are leaving for the next administration and how smooth the transition has been, but I’m also ready to have my life back.’’ 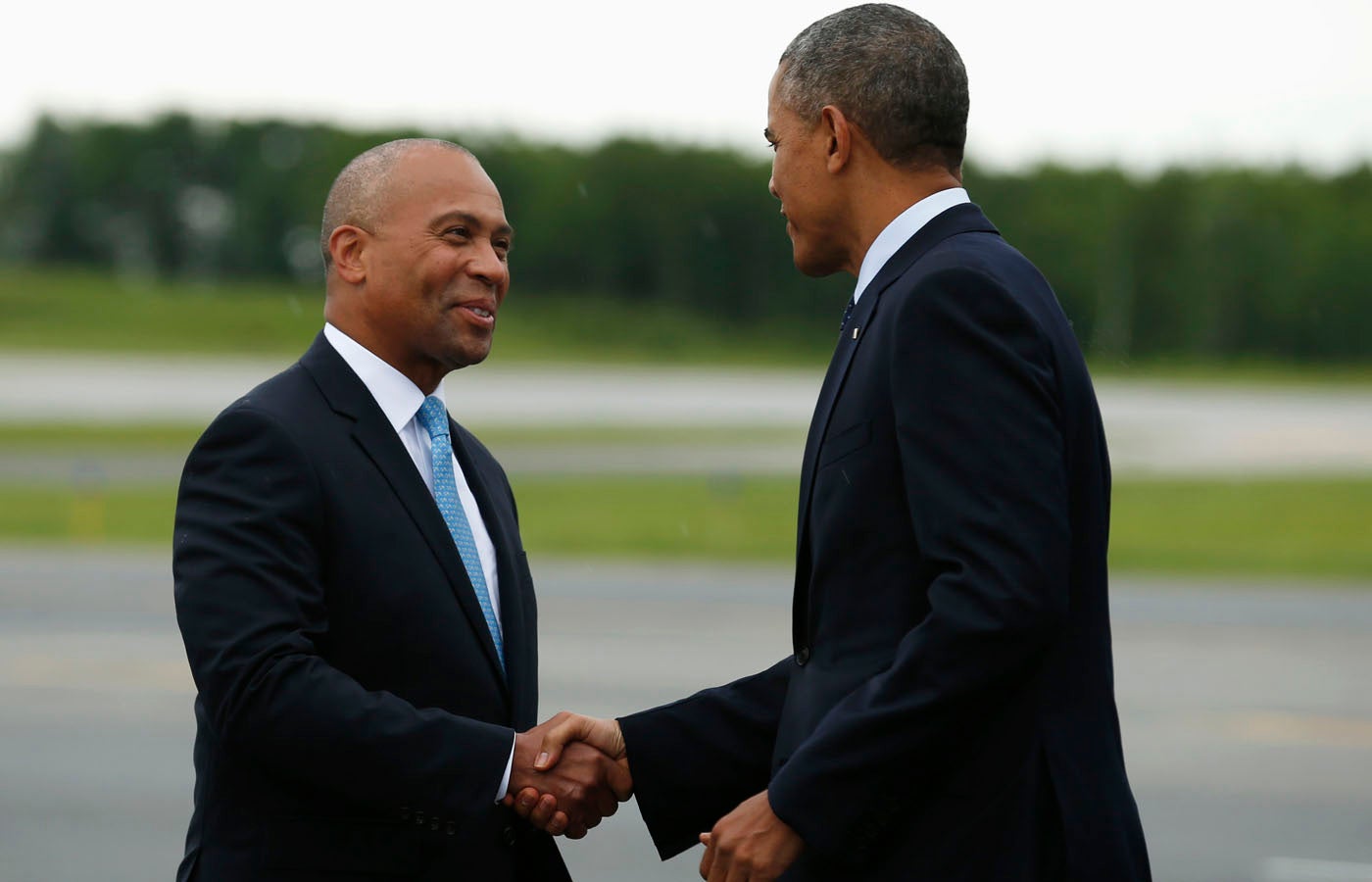 So what does the future hold for the civil rights lawyer turned politician? Could we see him make a run for the presidency?

“Maybe, but not right away,’’ Patrick told WCVB-TV in September 2014 interview. In November, Patrick confirmed that he wouldn’t run for president in the near future, saying “I’ve thought about it, but no, I can’t get ready for 2016.’’

Then again, he haspublicly held back on supporting any other potential presidential candidates, including Hillary Clinton, further fueling rumors that he’s priming for the Oval Office. 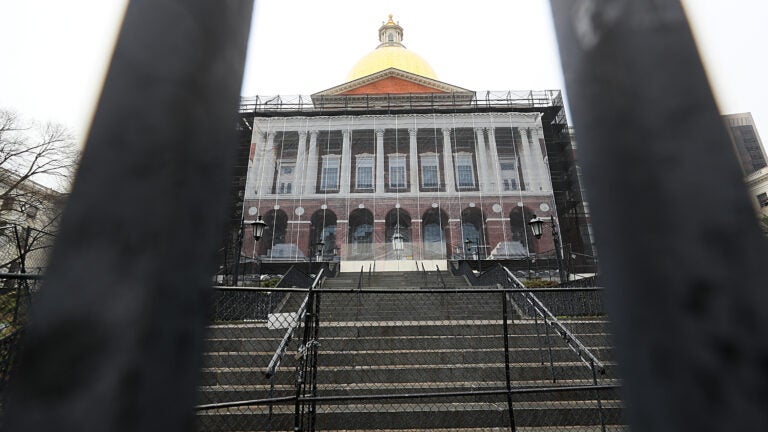