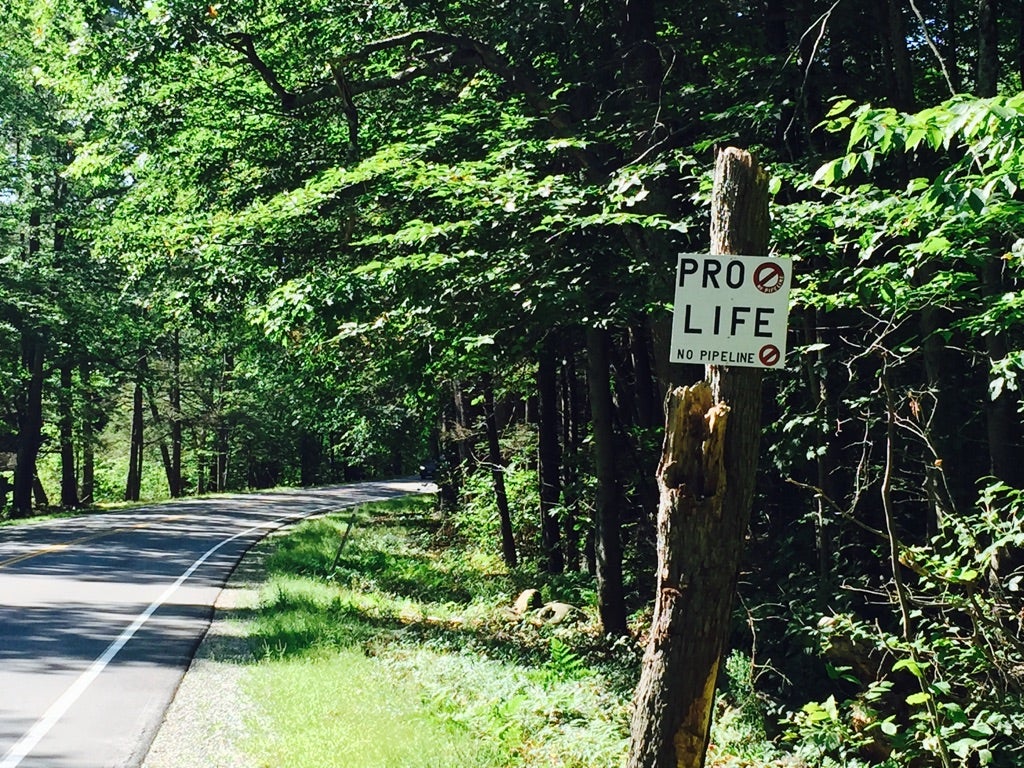 Cradling a couple of 20-ounce bottles of soda against her Green Bay Packers T-shirt, Mandy Buxton chats amicably with employees at the local convenience market in New Ipswich, New Hampshire.

“We just want to work, pay our bills, and get left alone,’’ says Mandy Buxton, as she waits to pick up a lunch order.

Buxton is 37 years old, but looks much younger. She says her husband owns an excavation business and proceeds to list all the burdens it incurs.

Buxton describes herself as pro-choice, but “when it comes to taking my money and guns…’’ she trails off.

While the idea of the most conservative town conjures images of some remote place up in the White Mountains, New Ipswich sits on the Massachusetts border.

The average commuter has to drive a half-hour to work. The plurality of those who stay work for local construction businesses or at Warwick Mills, the oldest-functioning textile mill in the state. (New Ipswich was home to the first wool and cotton mills in the state as well, opening in 1801 and 1804, respectively.)

The six-story, red-brick building is nestled next to a deep gorge along the Souhegan River, which runs under a gray, stone-arch bridge nearly as old as the mill.

Westward from Warwick Mills is New Ipswich’s “downtown,’’ or whatever passes as a downtown in a town of 5,000 people: a few commercial buildings; a Mobil station (the lone gas station in town) with an auto-repair shop off the side; a pizza place; and a modest convenience store/deli market with a striped green and white awning.

Outside the center of town, old, white colonials with big yards dot the dusty narrow roads. The state roads leading in and out of town are dotted by makeshift signs — posted on anything from telephone polls to tree trunks — proclaiming “Pro-Life’’ or opposing the Common Core.

The only background noise on those windy backroads is the occasionally approaching car.

Jillian Davis, 29, is assisting two other workers behind the counter of the New Ipswich Market as the lunch rush begins to file in from the summer heat.

Davis says she’s also a Republican and describes the town as hard-scrabble, as she preps cold cut subs and to-go burger orders.

“We’re not millionaires here,’’ she says. “People are working just to get by.’’ 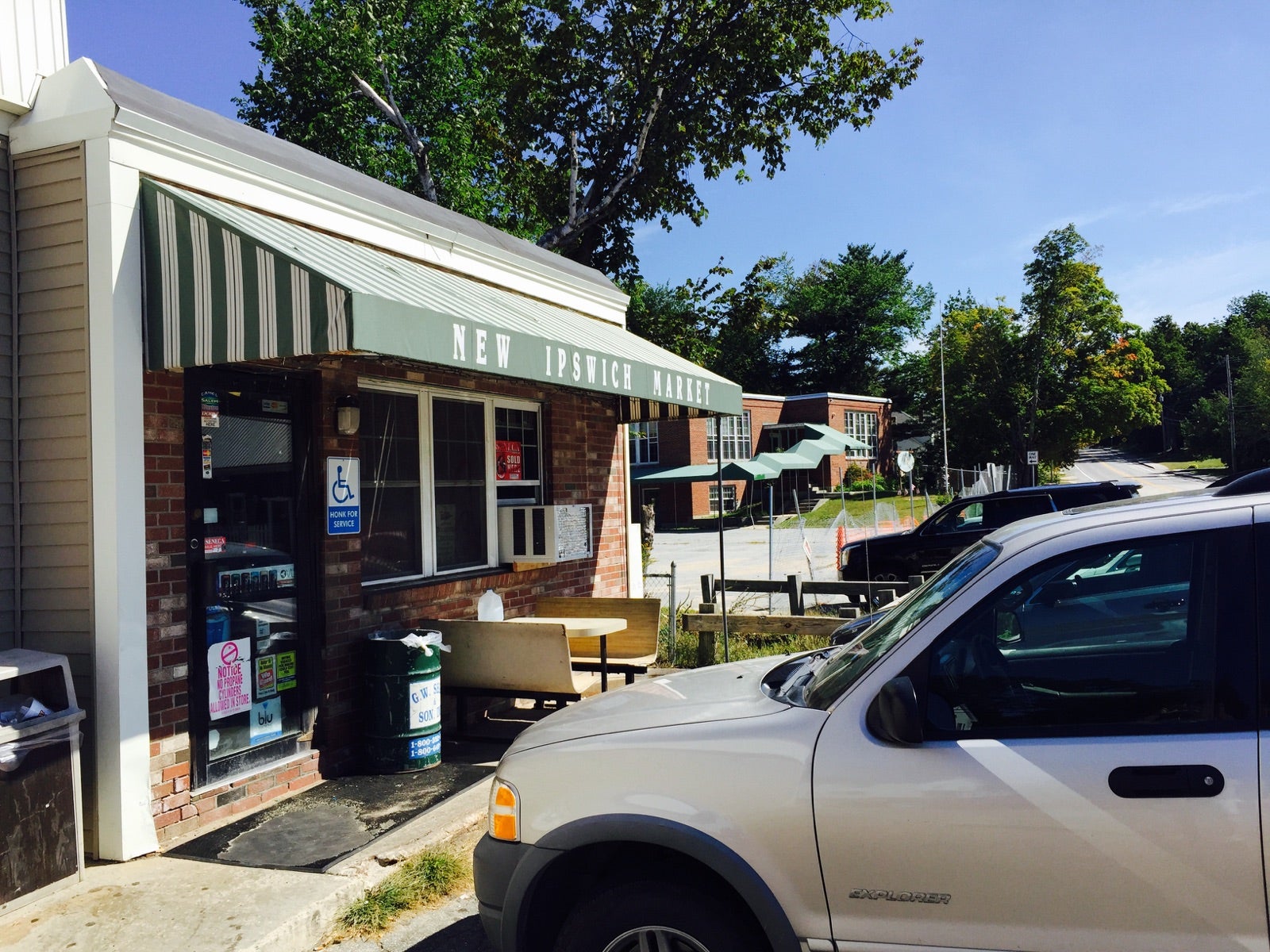 James Coffey, a three-term state representative for Hillsborough County, has lived in New Ipswich since 1979. He lauds the town’s history, hiking trails, sense of community, and — of course — its politics.

“It’s kind of like an oasis,’’ says Coffey, a Republican who describes himself as a conservative on most issues. He says the current most important issue is the proposed natural gas pipeline that would run through the town.

Coffey says residents have near-universally rallied against the pipeline, which would run through many private properties and put a 10-acre-large gas compressor station in the northeast corner of the town.

Residents often talk of a half-mile buffer-zone around the station site — colloquially known as the “incineration zone.’’ Within the zone, which includes an elementary school, if there was an explosion, there would be no survivors, multiple residents say. A spokesman for the pipline company, Kinder Morgan, told the Union Leader the “area is being studied for potential impacts.’’

New Ipswichians have petitioned against the pipeline. They’ve swarmed board meetings. They’ve even held anti-pipeline yard sales. They’re anything but apathetic.

“That’s all anyone is talking about,’’ says Anne Soini, a librarian at the quiet, burgundy and yellow New Ipswich Library around the corner from the town center. A sign perched in the grass outside the building advertises scrabble on Monday at 6 p.m.

“If I know someone opposes the pipeline, I don’t even want to bring it up, because I know they will stand there and go on for two hours about it.’’ Soini says.

Otherwise, says Soini, people keep their politics to themselves. To her, at least.

Coffey says the opposition to the pipeline is centered in the same ideology that grounds residents’ beliefs in gun rights, so-called right to work laws, or law taxes.

“I think, as a whole, it’s the perception that we want a minimal amount of interference from big government and we don’t need people to run our lives,’’ Coffey says.

New Ipswich is not unique among rural towns in its brand of Leave Me Alone politics, which aligns neatly with the conservative fiscal platform.

But in New Hampshire, the first state to legalize gay marriage via the legislature, New Ipswich provides a rare convergence of small-government economics and social conservatism — the result of a local idiosyncrasy. 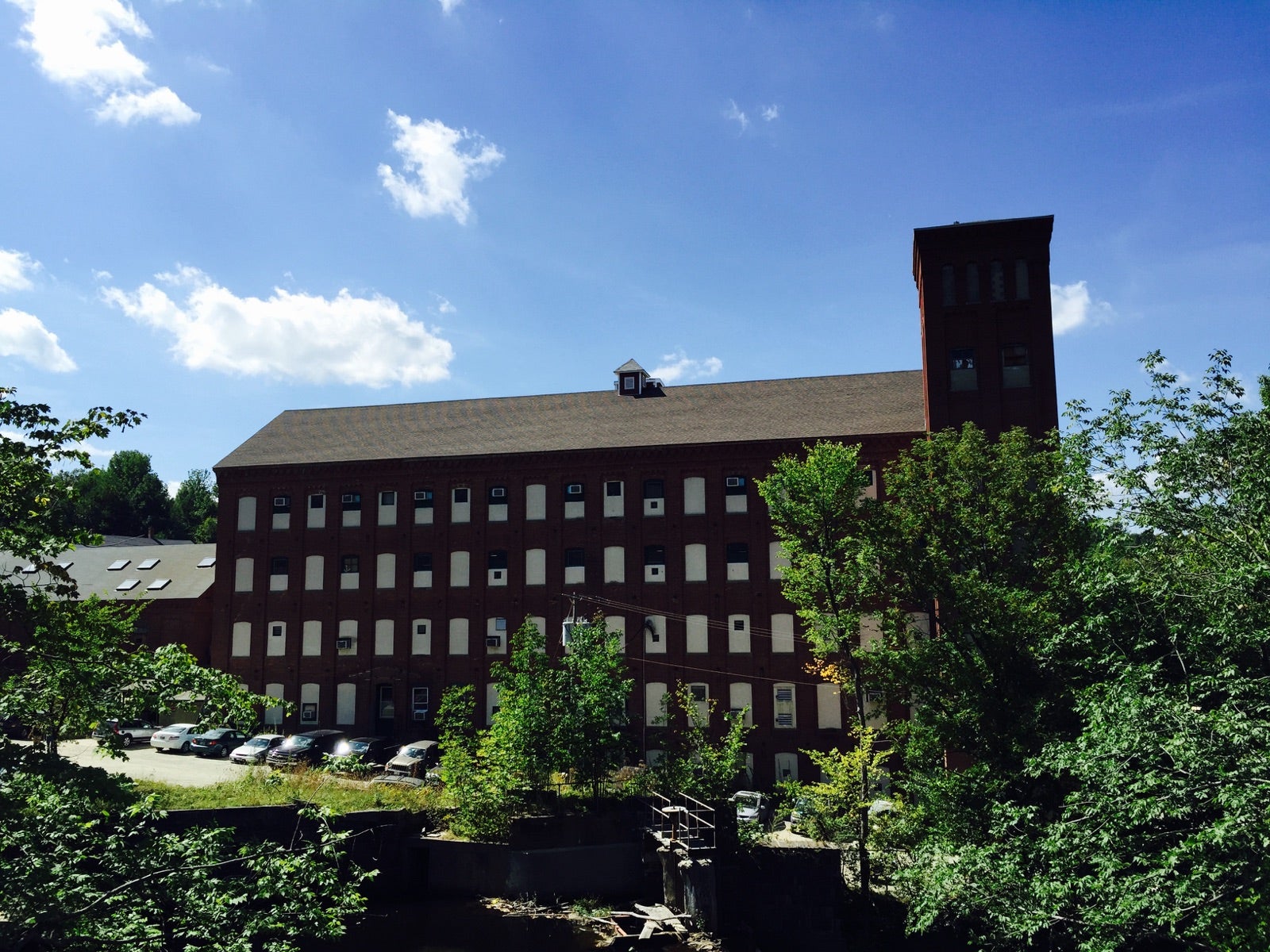 Warwick Mills, the oldest operating textile mill in New Hampshire, recently landed a $94-million contract from the U.S. Army to produce “concealable body armor and vests,’’ according to the Union Leader.

According to the U.S. Census, one fifth of the population is Finnish, which is more than 10,000 times the national proportion. Many are members of the Apostolic Lutheran Church, an evangelical Laetadiasnist religion founded by Scandinavian immigrants, in which alcohol, pre-marital sex, and birth control are strongly discouraged.

According to Davis, the blond-haired market employee, and other residents, it’s not uncommon for families to have upwards of 10 or more children. Residents overwhelmingly say the Finns are friendly, if reserved.

Coffey says the group has “a stronger sense of family values.’’

Bill Seppala, 59, is Finnish on both sides of his family and married his wife “of only half Finnish descent’’ via Ironwood, Michigan (another Finnish stronghold). He’s the chairman of the New Ipswich Apostolic Lutheran Church.

The oldest of 17 kids growing up, Seppala says he has eight children himself and worked as a police officer in town for six years.

He estimates the church’s total congregation is 400 or so, out of around 1,000 people in town with Finnish heritage, noting some Finns attend one of the seven other churches in town.

He says that as a church body, they do not believe in divorce, alcohol consumption, birth control, or same-sex marriage, though he concedes that does not mean some in their community had not had divorces or issues with alcohol.

“We still love them. That’s why God’s only begotten son gave his life to pay for where we fall short,’’ he says. “A person can become restored by repenting and believing it’s forgiven.’’

Seppala gives a long history of, in his view, the battle between God and Satan — the “long way’’ as he says — to describe some of his views.

“We inherited this corrupt flesh which wants to serve self and is prone to anger and feeds off the worldliness all yielding to the constant onslaught of the devil,’’ he says. “So we should reject worldliness and follow after God and come to know the lover of our soul.’’

“I didn’t mean to sermonize you,’’ he says, but explains it’s important to understand forms of “worldliness’’ — TV, dancing, pop music, tattoos — are distractions by the devil to draw people away from the belief in God. 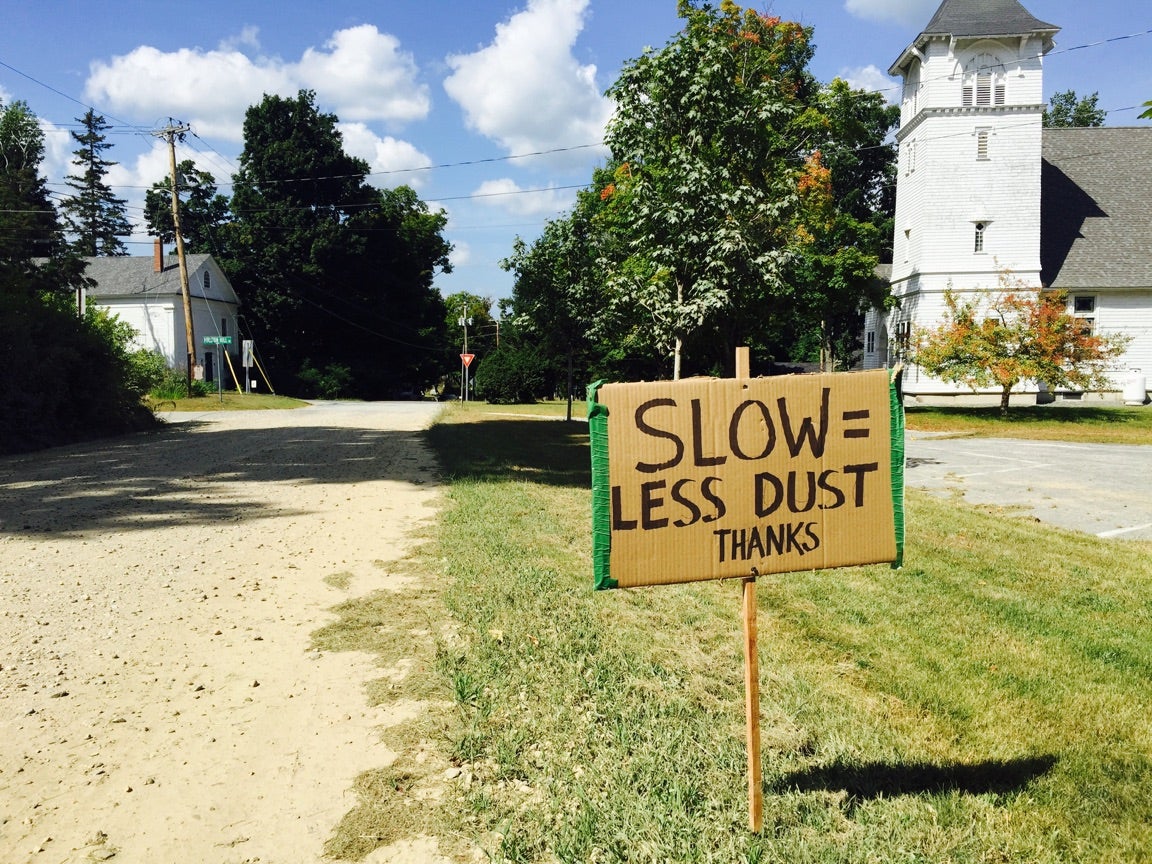 Both Seppala and Coffey confirm that, despite being the most Republican-voting town in the state, not one of the 16 GOP presidential candidates has visited New Ipswich this year, as they blanket the rest of the state with campaign stops.

According to Seppala, the last presidential candidate to visit was George H.W. Bush, during his failed 1980 primary campaign against Ronald Reagan.

Coffey is puzzled why neither any campaign nor the state party has organized an event in New Ipswich. For now, residents would have to drive 20 minutes north to Peterborough for the chance to catch a candidate, as most presidential hopefuls zip up and down Interstate 93.

“I mean, how do they get led here?’’ he says. “They probably could get Hillary down here faster than a Republican. What’s wrong with this picture?’’

Seppala says he would welcome hosting a candidate at the New Ipswich Apolostic Lutheran Church for a community event and he thinks they would get a good turnout from the locals.

He says he’s never been asked to host a campaign event, but he doesn’t think it would be a problem to get residents to turnout for a GOP candidate.

“The conservatism is shared by both church goers and non-church goers,’’ he says, noting his own personal politics.

“I also am a Republican because I value traditional marriage and am for lower taxes and don’t believe big government is the answer,’’ says Seppala.

“I think goverment should get out of our lives’’ he says. “I run a small business with approximately 40 people and I can assure you the government has only hindered us with their excessive over-regulations.’’

Most New Ipswich residents would agree with the church leader. Big government, regulations, taxes; those be the work of the devil. 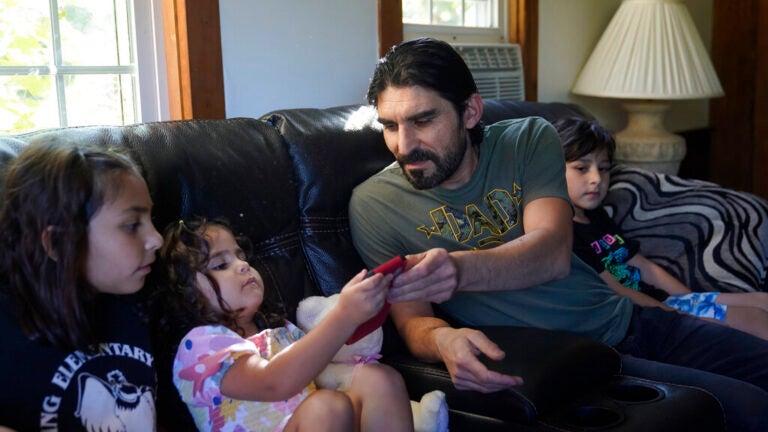