If America really runs on Dunkin’, then Hillary Clinton and Jeb Bush are in lockstep with U.S. voters.

Marco Rubio and Ted Cruz, however, are running on—gasp—Starbucks.

Dunkin’ Donuts and its beloved year-round iced coffee holds a place near and dear to the heart of New England. So ahead of the New Hampshire primary election on Tuesday, we analyzed recent campaign finance reports from the Federal Election Commission to get to the bottom of a key question on voters’ minds.

How much has each presidential candidate’s campaign spent on Dunkin’ Donuts? 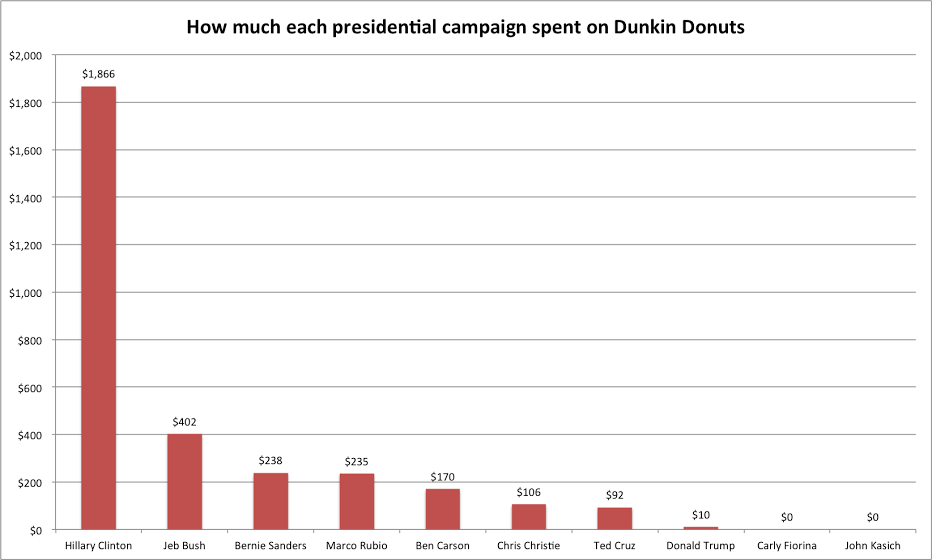 Bernie Sanders, the lone New England-based candidate of the bunch, spent the third-most on Dunkin’, purchasing $106 and $132 worth of donuts and coffee in September.

Despite heavily campaigning in New Hampshire in recent months, John Kasich did not charge any Dunkin’ purchases to his campaign. And the only Dunks purchase by Donald Trump’s campaign was a paltry $10.46 at a Manchester Dunkin’ Donuts on December 9th.

But it’s not just total dollars that matters here. We also looked at the number of individual transactions at Dunkin’ Donuts. 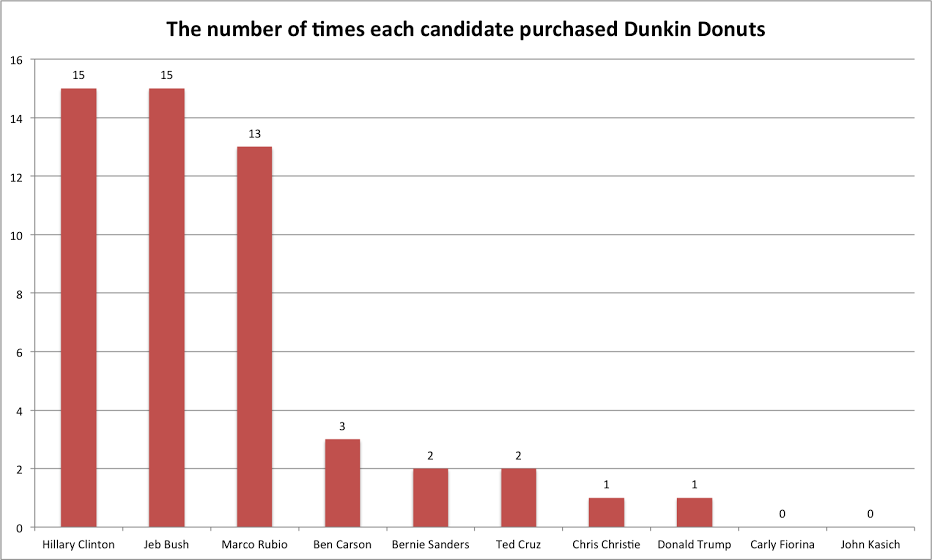 The two Floridians are big buyers here. Jeb Bush’s campaign hit up Dunkin’ 15 times from October to December, mostly in small increments. In one pit stop on December 3rd, his campaign spent just $2.

Marco Rubio, too, had a number of small purchases at Dunkin’. Of his campaign’s 13 purchases there, 10 of them were for less than $10, including a $1 purchase on November 23.

Judging a candidate’s New England-ness isn’t just about their fondness for Dunkin’; it’s also based on their distaste for its closest rival, Starbucks. So we examined how much each candidate’s campaign spent on Starbucks. 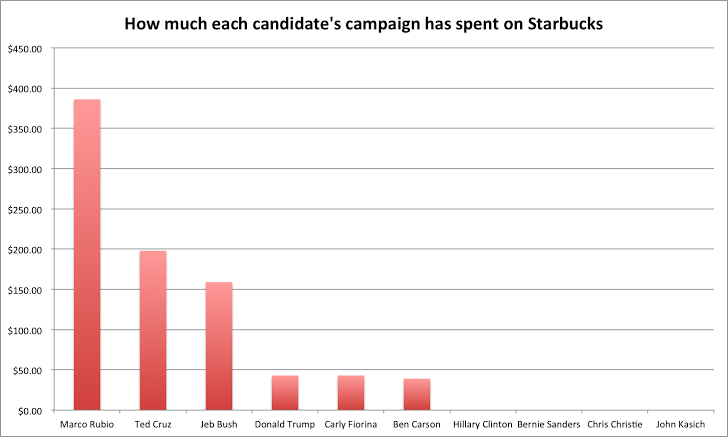 Whoa there, Marco! Rubio and his campaign seem to have a coffee addiction in general. His campaign expensed Starbucks a total of 51 times on the campaign trail for a total of $386, both of which were the most among candidates.

Ted Cruz, the senator from Texas, has taken to mentioning Dunkin’ Donutsduring his recent travels in New Hampshire. He’s visited the establishment before, too.

But his expenses show the campaign is much more fond of Starbucks, spending almost $200 there over the course of 28 pit stops, both the second-most of candidates. See, for example, Cruz holding a Starbucks cup with Glenn Beck in Iowa.

Interestingly enough, neither Democratic candidate expensed any money at Starbucks. The Democrats run on Dunkin’, apparently.

(h/t Gawker for the idea)