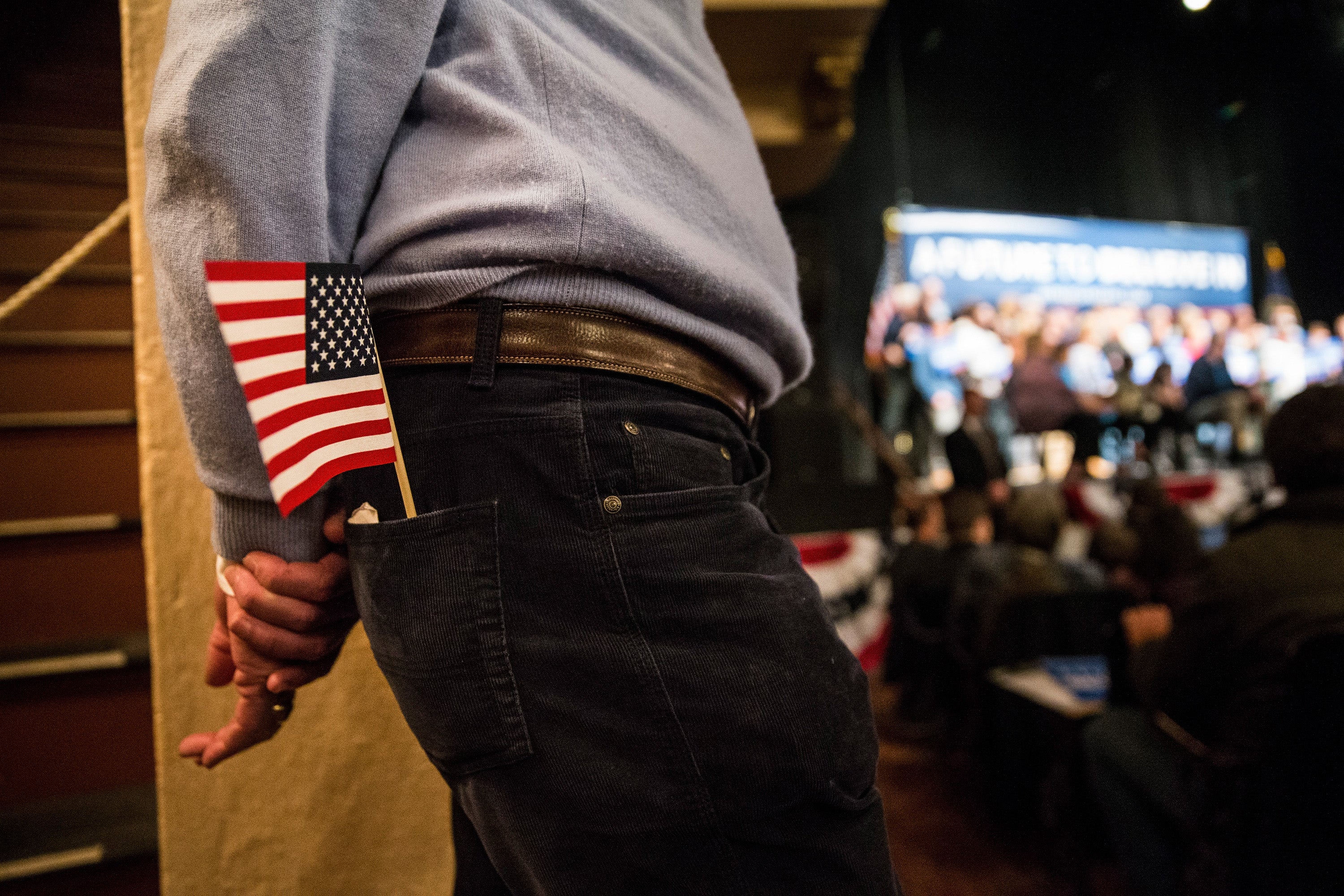 MANCHESTER, N.H. — A rambunctious herd of presidential candidates dashed across a snowy New Hampshire on Monday, making last-ditch efforts to persuade undecided voters on the eve of the nation’s first primary election, the outcome of which could bring a dose of clarity to a campaign that has become surprisingly muddled.

In a final exchange of cutting accusations over money and preparedness for the White House, the Republican and Democratic contenders urgently jockeyed for advantage in what remain two surprisingly fluid contests.

And Hillary Clinton lodged a dubious accusation at Sen. Bernie Sanders, suggesting that he had taken large donations from Wall Street, in an attempt to raise doubts about Sanders’ own independence from big banks. Sanders’ campaign said she was lying.

But with New Hampshire’s history of defying polls and the sense of confusion that Trump’s candidacy has imposed on the presidential race, a glut of contenders clung to the idea that anything could be possible Tuesday.

As a snowstorm complicated the final crush of campaign events Monday, Republicans scrambled to outperform recent polls that suggested Trump was the favorite to win the state, with a glut of more mainstream candidates locked in a battle for second place. 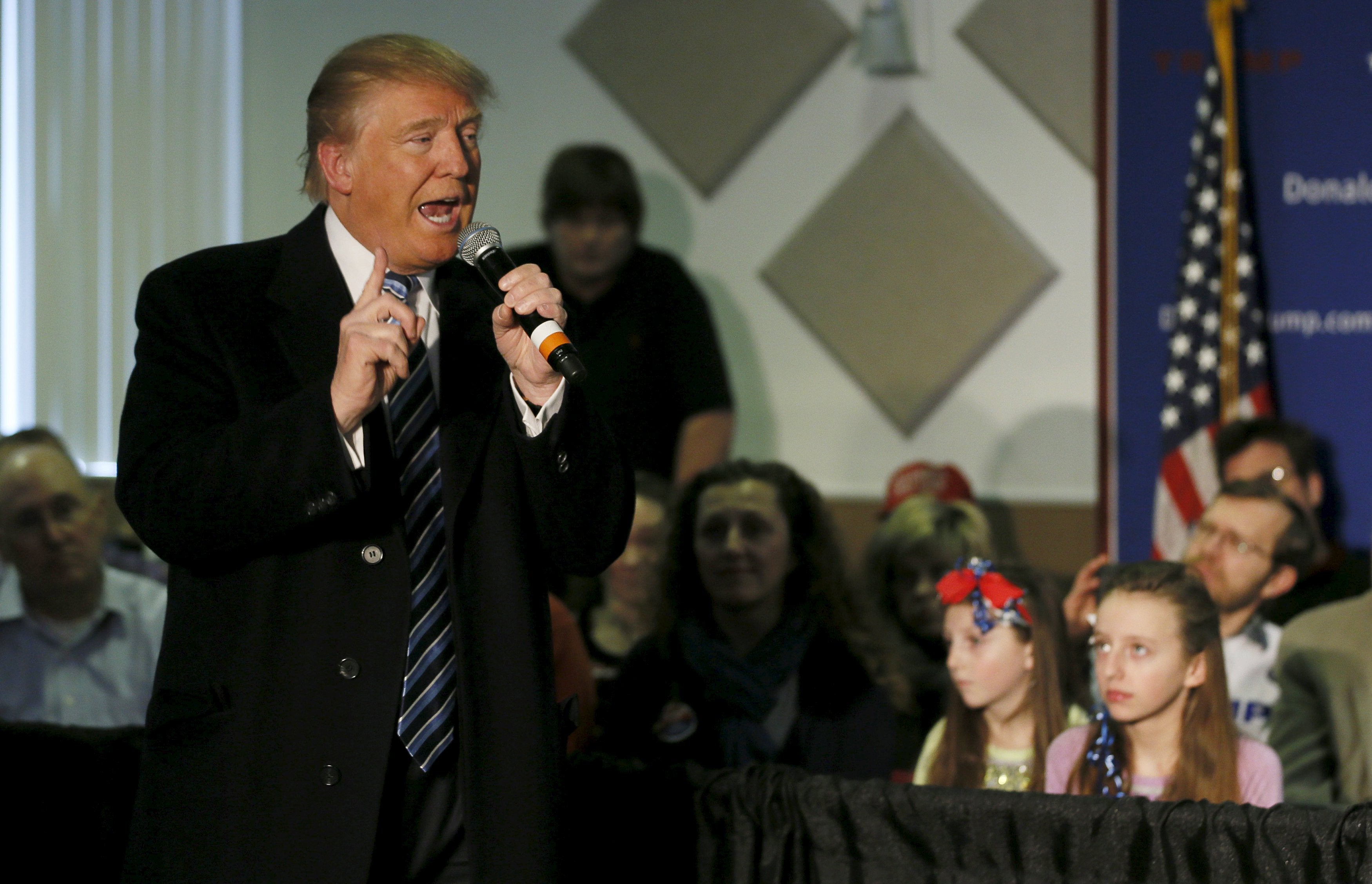 Donald Trump responds to a question from the audience Monday at a town hall at the Lions Club in Londonderry, N.H.

An unusually subdued Trump, who faced criticism for canceling an event Friday because of snow, expressed some concern about the weather.

“Why does it have to snow now?’’ he said at a town hall-style meeting in Salem. But he urged voters to show up at the polls Tuesday regardless, saying, “This is like a destiny thing.’’

The storm, which began before noon and was expected to drop several inches through Tuesday morning, had all the campaigns talking to their field organizers to ensure they were prepared for get-out-the-vote complications.

Members of Bush’s campaign staff said they were prepared to offer voters rides to the polls, and Clinton said in an interview with WBZ radio, a Boston station, that aides and volunteers were ready to help voters reach the polls no matter how bad the conditions were. 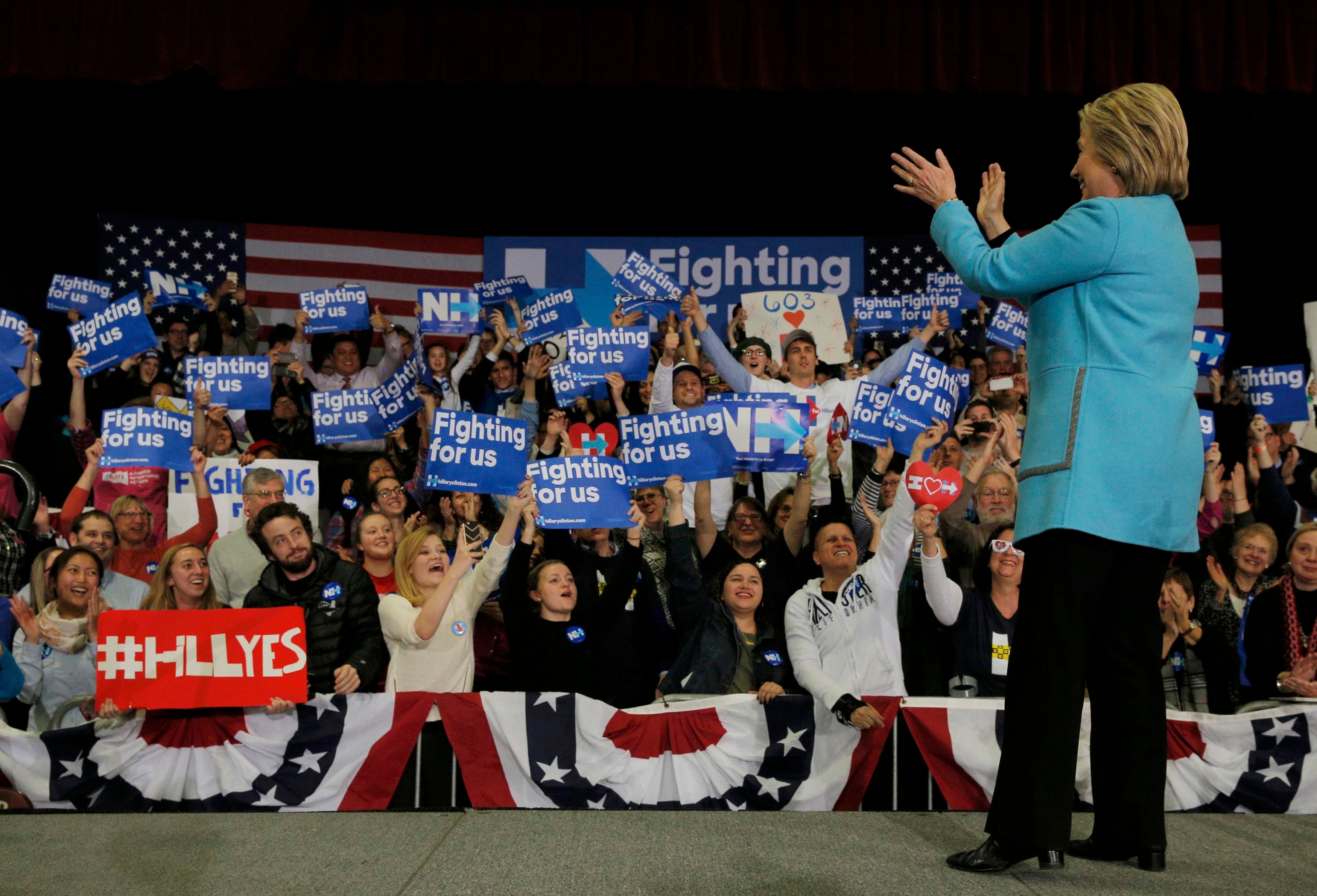 At an afternoon rally at Manchester Community College, Clinton sought to lower her threshold for what would constitute a success in the state’s Democratic primary even as she threaded her stump speech with a more personal reminder to New Hampshire voters that they had stood with her family before.

“As for all of those who are still deciding, still shopping, I hope I can close the deal between now and the time polls close,’’ she said.

Former President Bill Clinton, who introduced his wife, struck a softer tone regarding Sanders, her rival for the Democratic nomination, than he did the day before. On Sunday, he drew unwanted attention for lashing out at Sanders, who holds a big lead in New Hampshire polls.

“I have to be careful what I say,’’ Clinton said, to laughter.

Sanders, who took the stage in a packed theater in Manchester on Monday, was less cautious in expressing optimism about Tuesday.

“I think we are going to do just fine tomorrow,’’ he said before launching into his unvarying stump speech focused on income inequality and an array of liberal proposals.

Sniping between Clinton and Sanders, and between their campaigns, continued to ricochet. Struggling to shake Sanders’ suggestion that she is beholden to Wall Street, Clinton on Monday accused him of hypocrisy, asserting that he had accepted $200,000 in donations from the banking industry by way of the Democratic Senate Campaign Committee.

But Jeff Weaver, chairman of Sanders’ campaign, accused Clinton of lying out of desperation, saying the ultimate sources of the donations from the Senate Democrats’ campaign arm also included labor and environmental groups. In a statement, he called Clinton’s gambit “laughable’’ and said it showed her campaign was in “disarray.’’ 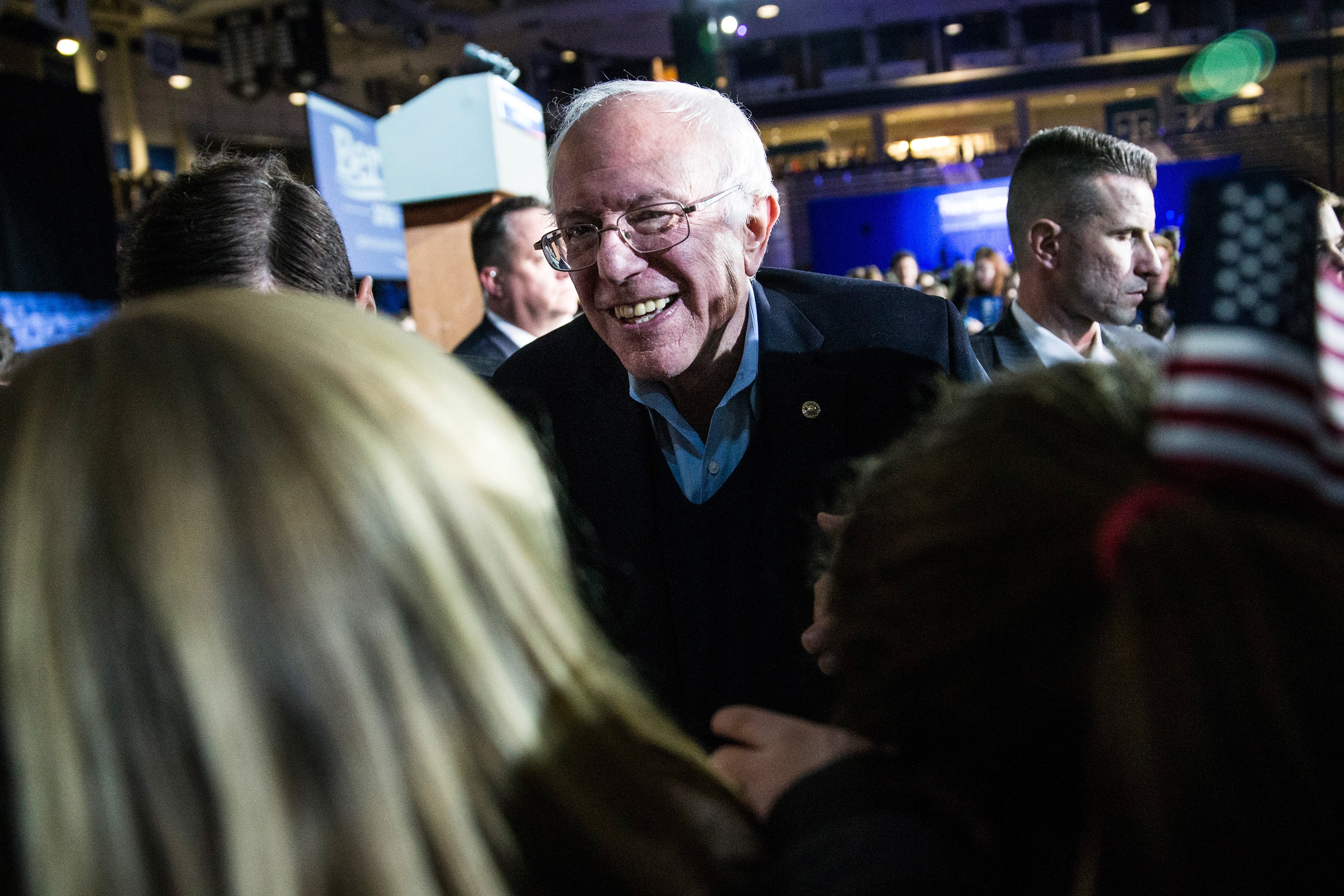 Bernie Sanders shakes hands with audience members Monday after speaking at a campaign rally and concert at the University of New Hampshire’s Whittemore Center Arena in Durham, N.H.

In the crowded Republican field, the candidates lashed out at one another at campaign stops, in television interviews and on social media.

“You aren’t just a loser, you are a liar and a whiner,’’ Bush wrote in a post on Twitter, directed at Trump.

Trump did not pull punches in response, telling CNN that Bush seemed to be having a “breakdown.’’

“He’s an embarrassment to his family,’’ Trump said. “He has to bring his mother out and walk his mother around at 90 years old. I think it’s a very sad situation that’s taking place.’’

Rubio, the Florida senator, continued to face ridicule over his embarrassing debate performance Saturday night, in which he repeated the same critique of President Barack Obama several times. Several said Rubio had cracked under pressure and was not ready to be president.

“When the lights get that bright you either shine or you melt,’’ Gov. Chris Christie of New Jersey said at a town hall event in Hudson. “We cannot afford to have a president who melts.’’ 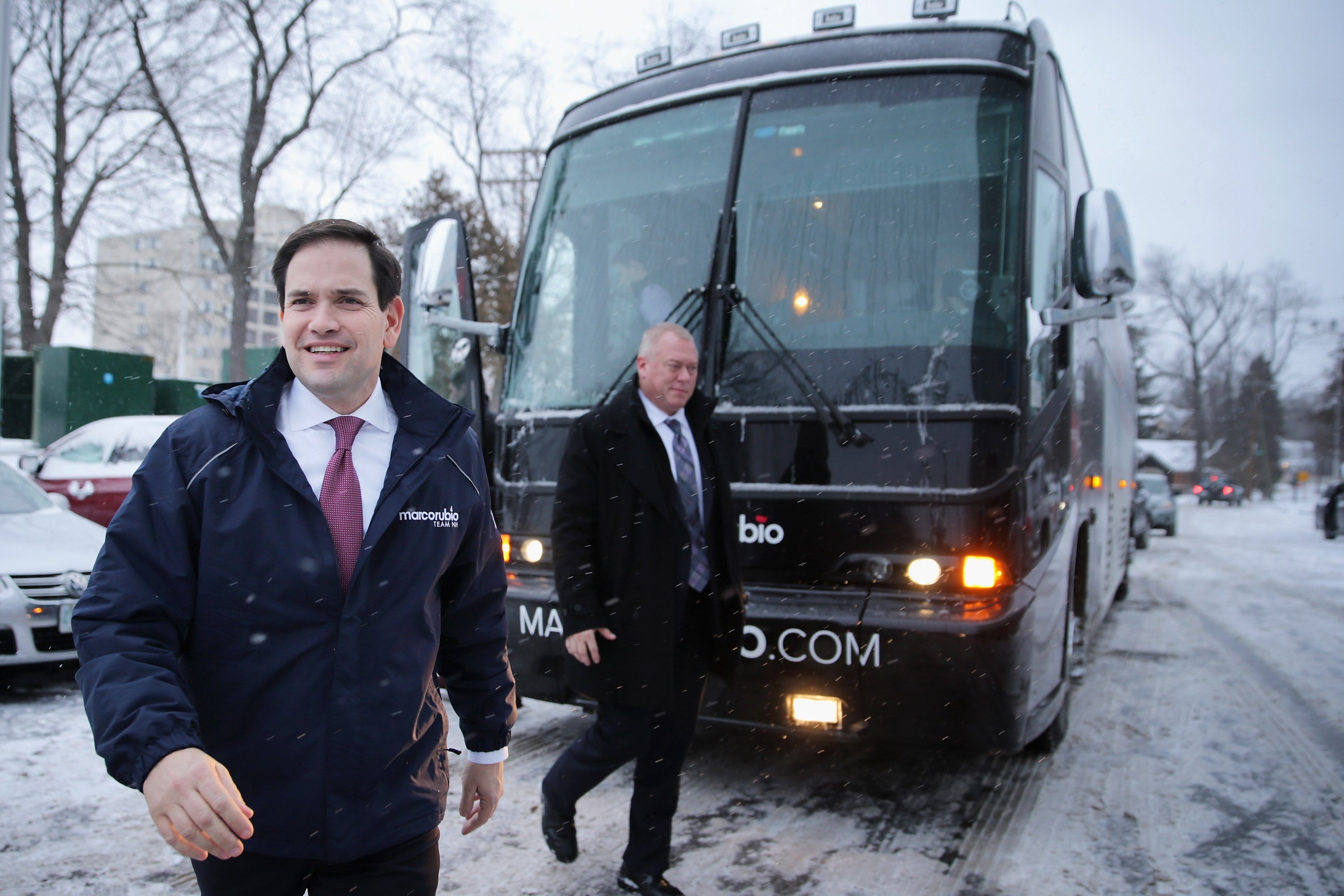 Campaigning in Nashua, Rubio at times appeared listless but continued to defend his debate performance, even bringing it up himself. When a member of the audience at a town hall meeting asked him about America’s relationship with Israel, Rubio pivoted to the same refrain about Obama.

“You know, one of the things that’s funny because people keep, uh, you know — the press, anyway — ‘Why do you keep saying the same thing about Obama trying to change America?’’’ Rubio said. “I am going to keep saying that a million times because I believe it’s true.’’

Later in the day, during a stop at the Barley House restaurant in Concord, Rubio flashed his growing frustration with the sustained criticism coming from the New Jersey governor.

“If you’re Chris Christie, and you supported gun control, gave a personal contribution to Planned Parenthood, supported Sonia Sotomayor’s appointment to the Supreme Court and are a big strong proponent of Common Core, you can’t run on your record,’’ Rubio said, rattling off the biggest conservative knocks on Christie.

Yet the question of Rubio’s experience dogged him again Monday. During the town hall meeting, held at an aerospace contractor’s Nashua offices, another member of the audience pointedly asked him to name his single biggest accomplishment in the Senate — the focus of his rivals’ attacks during the debate.

Rubio ticked through the same list he had mentioned during the debate, citing his role in passing new sanctions against Hezbollah and his work fighting the trafficking of young girls.

But Rubio’s opponents did not let up. Bush, the former Florida governor, made a point of portraying Rubio, his former protégé, as too inexperienced to be commander in chief.

“He doesn’t have a proven record, and I think people aren’t willing to make a risky bet on that,’’ Bush said on MSNBC’s “Morning Joe’’ program.

Bush pointed to his own crowds, which have been growing in recent days, as a sign that New Hampshire Republicans were wising up in the countdown to Tuesday’s vote.

“What they’re doing, I think, is saying, ‘We want someone with a steady hand as president of the United States, not someone that just talks trash or someone who’s scripted,’’’ Bush said.

Gov. John Kasich of Ohio, who is also vying for second in New Hampshire, was similarly unsparing when it came to Rubio.

“People are looking not only to understand what’s in your head, but they also want to know what’s in your heart,’’ he said outside of a library in Plaistow, New Hampshire, as snowflakes swirled around him. “And if all you are is scripted, I’m not sure people respond to that.’’ 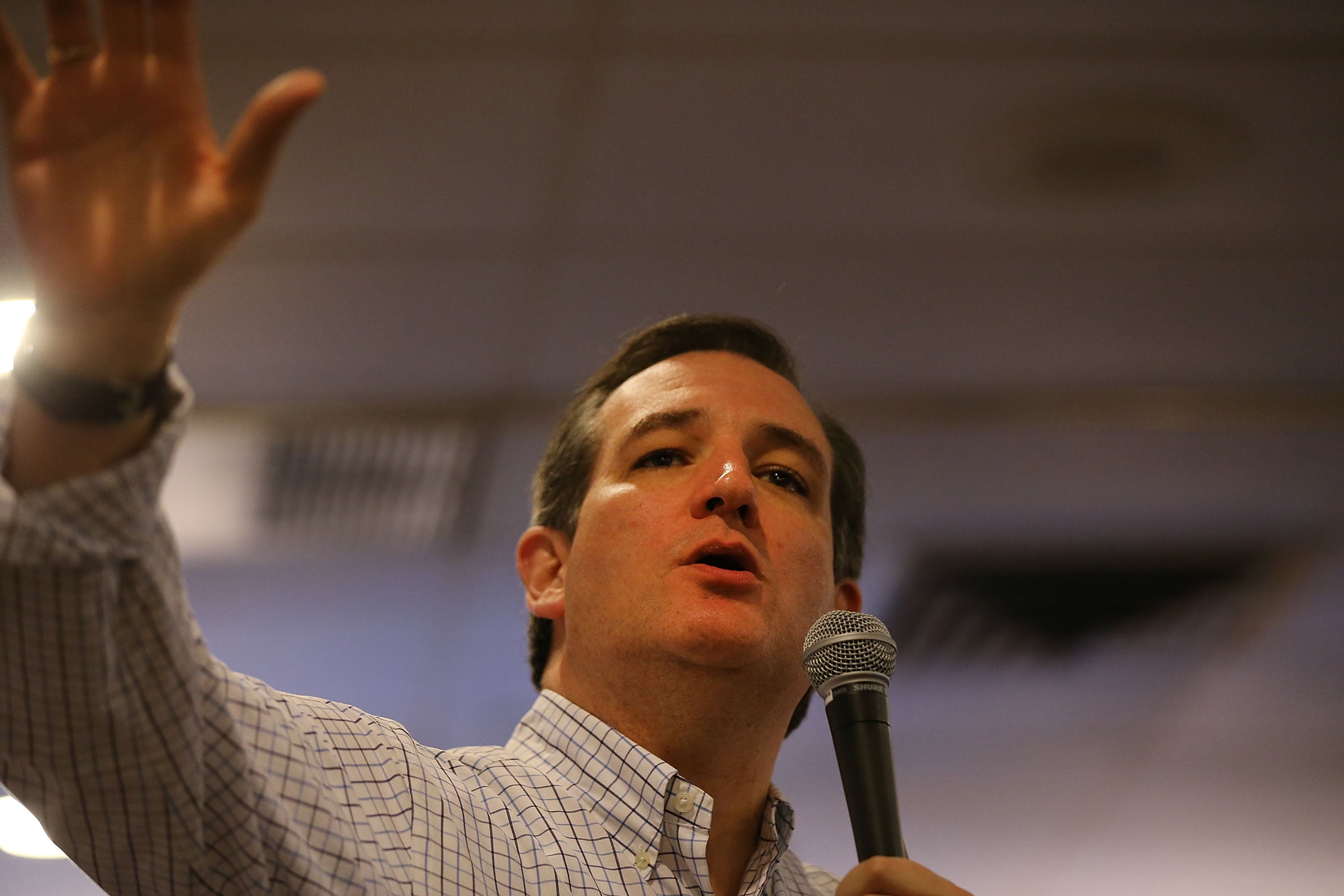 Ted Cruz speaks to voters Monday at an American Legion in Manchester, N.H.

Despite slippery streets, voters filled forums in libraries, lodges and even a metal fabrication plant to get last looks at the candidates. Many remained undecided.

Some were less than welcoming, such as a heckler in Raymond who told Sen. Ted Cruz of Texas that Cruz was “possessed by a demon.’’

Cruz had a friendlier welcome from a crowd of Tea Party adherents in Manchester later in the day. “Have you noticed everyone says they are conservative?’’ he said of his Republican rivals. “They don’t say, ‘I’m an establishment moderate squish.’’’

He also leveled a none-too-veiled critique at Trump: “If you think Washington is fundamentally broken, the solution isn’t to elect a deal-maker,’’ Cruz said. “How else do you think you get a $19 trillion debt?’’

Linda Bournival, 55, a self-employed actuary from Kingston, thought she was going to vote for Rubio. But she said the debate had spurred her to take in another talk from Christie, whom she had seen before.

Bournival said she was a fan of Christie for his battles against teachers’ unions in New Jersey, but also appreciated Rubio’s “way of approaching politics.’’ She said she did not want to be completely swayed by the debate. Still, she said, after the debate, “I started thinking more about what are his accomplishments.’’

After defying the polls in the Iowa caucuses, Rubio did a little expectations-lowering Monday. When a woman at a Nashua diner asked him, “You’re going to win, right?’’ he quickly responded, “Sure!’’

But he added, smiling: “It’s just going to take a little longer, that’s all.’’ 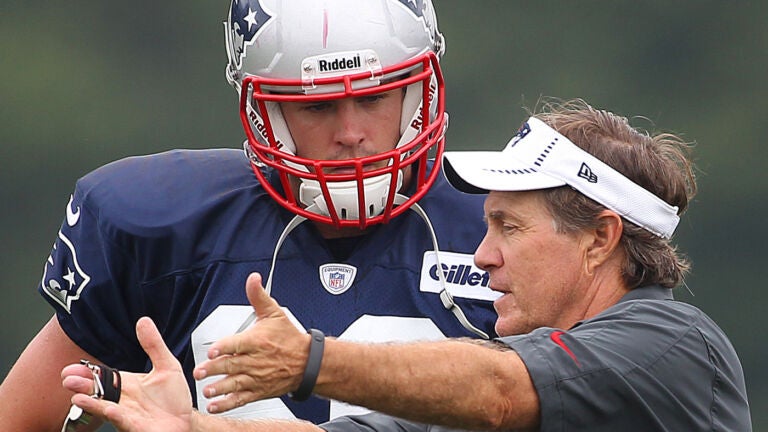