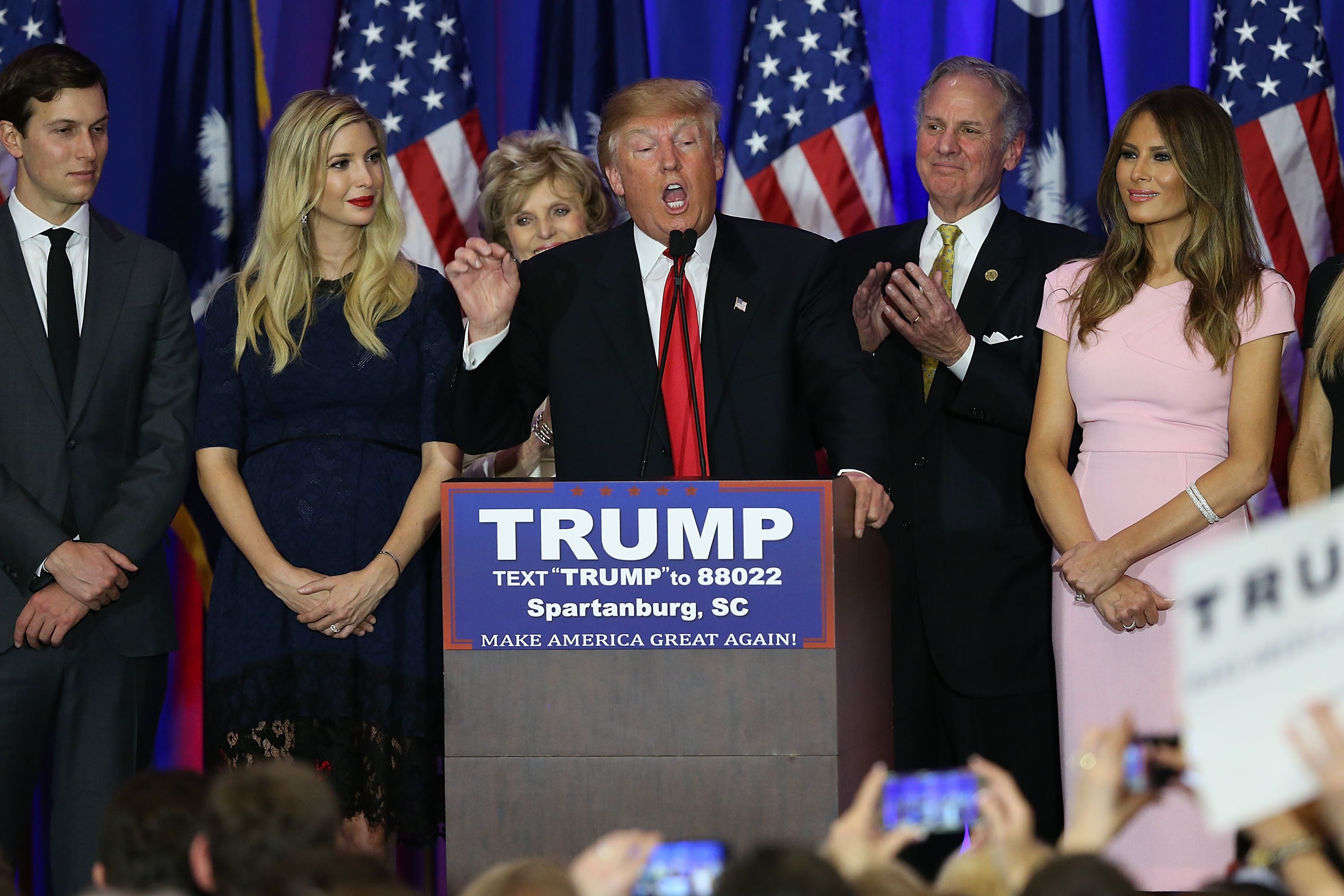 Donald Trump speaks following his victory in the South Carolina primary on Saturday.

Mainstream Republicans arose on Sunday reeling from Donald J. Trump’s sweeping victory in South Carolina, with some refusing to accept that he could be the eventual nominee and others acknowledging that his insurgent candidacy might soon be unstoppable.

With their sights set on upcoming caucuses in Nevada on Tuesday and “Super Tuesday’’ a week later, the Republican candidates scattered across the country to regroup and prepare to take their messages to a wider audience.

The enormity of the implications of the results in South Carolina for Republicans had only just begun to set in on Sunday morning, as the party firmly closed the door on 25 years of Bush family primacy and turned toward a New York real estate mogul as its plurality victor.

On the Democratic side, Hillary Clinton appeared relieved that she had won in Nevada, fending off Sen. Bernie Sanders of Vermont and dealing a blow to his momentum with their own South Carolina showdown coming on Saturday.

But the biggest questions remain in a reshuffled Republican race that saw Jeb Bush suddenly drop out and left Trump’s remaining rivals struggling to gain momentum. 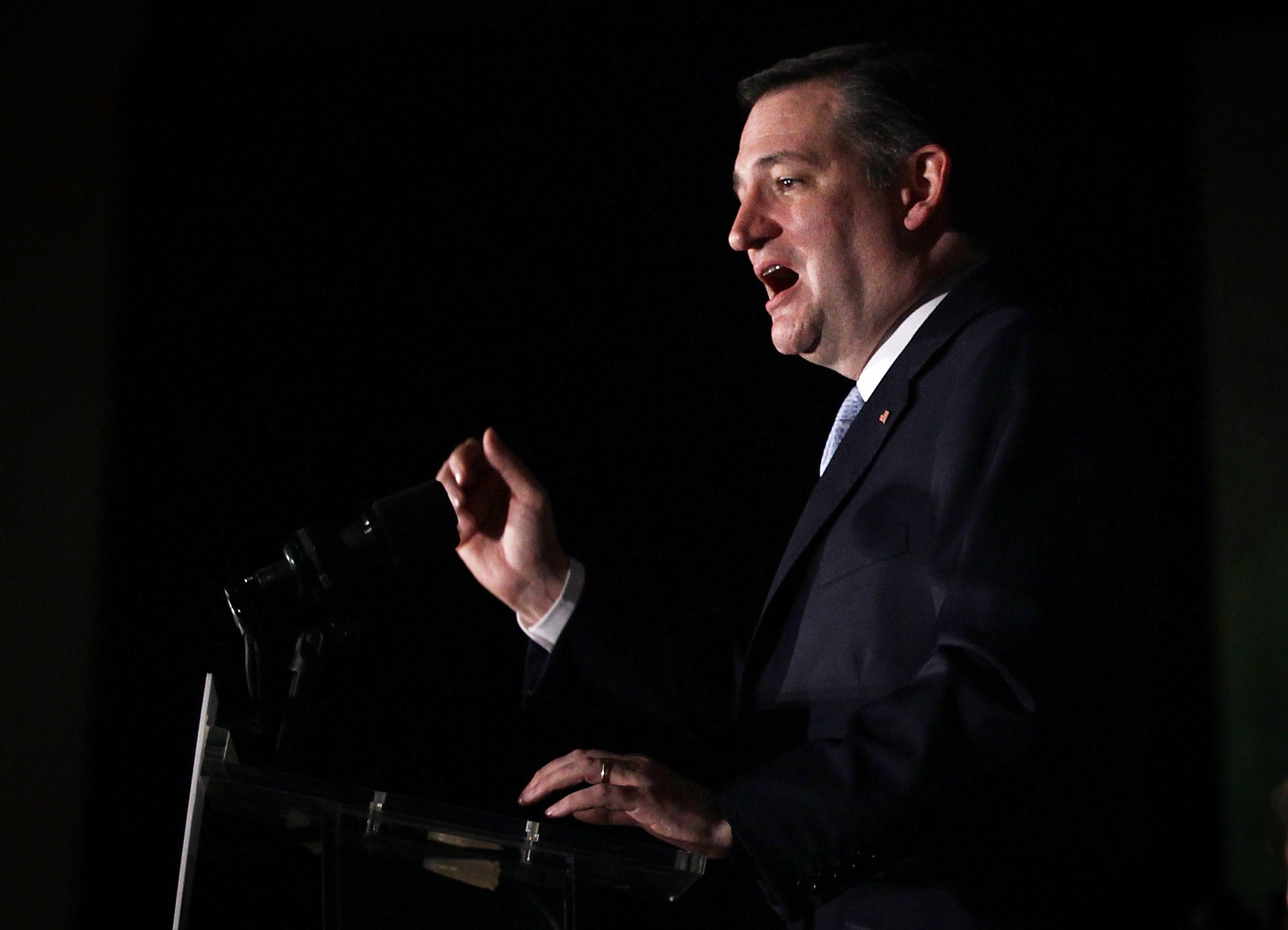 Ted Cruz speaks to supporters during a primary night party at the South Carolina State Fairgrounds on Saturday in Columbia, South Carolina.

Sen. Marco Rubio of Florida and Sen. Ted Cruz of Texas, who finished nearly tied behind Trump in South Carolina, urged the rest of the party to coalesce around their campaigns on Sunday and tried to make the case that the nominating fight was still at an early stage.

“Last night was truly the beginning of the real Republican primary,’’ Rubio said on CNN. “I think the race last night was reset.’’

Still, in a sign of how Trump’s opponents continue to tread gingerly around him, Rubio declined to attack him aggressively on Sunday. Asked about taking a more forceful approach, Rubio would only say that Trump’s lack of foreign policy knowledge was worrisome.

Cruz, whose narrow third-place finish was widely seen as a disappointment, said that he was the lone candidate who had shown an ability to top Trump. Cruz finished first in Iowa earlier this month.

Trump was magnanimous in a round of television interviews Sunday morning. Turning his attention to the general election, he said he was the candidate best suited to draw support from Democrats and independents in order to beat Clinton.

Trump generally went easy on his Republican opponents and even offered some kind words about Bush, whom he had attacked viciously during the campaign.

“I wish him well — he’s a nice person, he fought really hard,’’ Trump told the hosts of “Morning Joe’’ on MSNBC, adding that his son Eric was friendly with one of Bush’s sons.

As soon as the polls closed in South Carolina on Saturday night, Rubio’s supporters began firing off emails to Bush’s backers, many of whom they had remained in close contact with during the last few months in anticipation of Bush’s campaign ending.

Some of Rubio’s associates circulated data points from recent polls showing that he would defeat Trump if the Republican contest narrowed to a two-man race. Others were more blunt, arguing that their differences with Bush were never about him personally but instead rooted in their belief that Rubio was the only candidate in the race with the broad appeal to beat the Democrats in the general election.

“We’ll see how it plays out,’’ Rubio said early Sunday as he was boarding a flight from South Carolina to Tennessee, which holds its primary as part of the Super Tuesday slate and is a place where Rubio hopes to pick up crucial delegates. “We feel like a lot of people that were on Jeb’s team are people we’re going welcome onto our team, people we’ve known for a long time.’’ 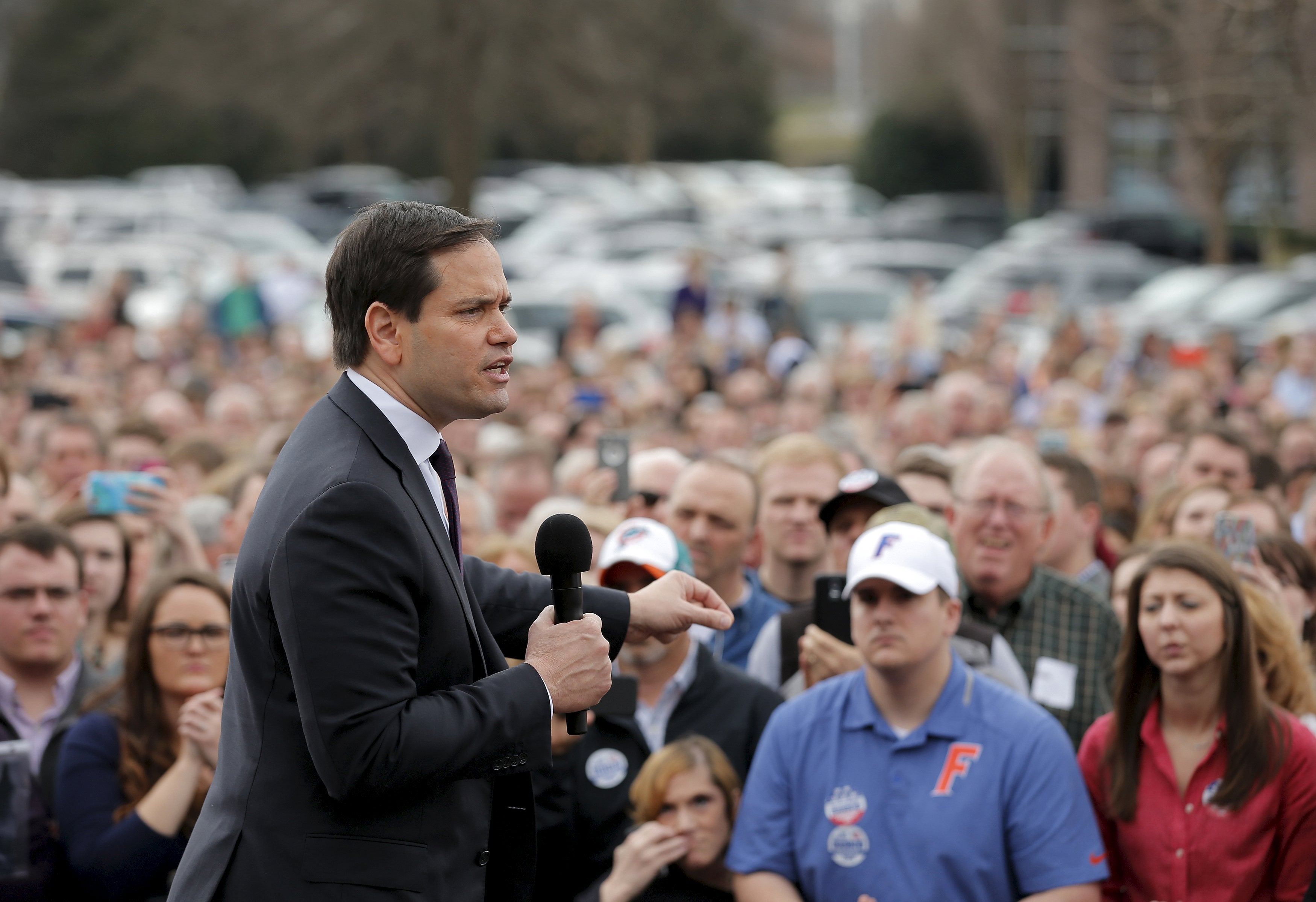 Marco Rubio speaks during a campaign event in Franklin, Tennessee, on Sunday.

But as the candidates projected confidence, members of the Republican establishment were fraught with increasing anxiety about Trump’s prospects.

Henry Barbour, a Republican National Committee member from Mississippi, sounded a note of alarm about Republicans continuing to wait to see how the race plays out.

“After Trump has won in New Hampshire and South Carolina, Republicans are crazy and about to blow the White House if we don’t rally to stop him,’’ he said. “It’s certainly time that we have to consolidate the race.’’

He predicted that Trump’s nomination would not only cost Republicans the White House but also hurt the party’s chances of keeping its majority in the Senate.

Trent Lott, the former Republican senator from Mississippi, also was bewildered by the results in South Carolina.

“I’m perplexed like everybody else. I don’t know what to think about it,’’ Lott said. “We are all shocked and have somewhat been mired in disbelief, and yet he continues to move forward.’’

Lott did not advocate a wholesale effort to try to stop Trump and said he believed that there was still time and that his favored candidate, Gov. John Kasich of Ohio, would perform well in upcoming contests. But he also said the Republican Party needed to try to understand what was driving the Trump “phenomenon.’’

Rep. Tom Cole, R-Okla., suggested the nomination process was likely drag on for some time.

“I don’t see this thing being done by March, for sure,’’ said Cole, who conceded that there would be some concern from various quarters about Trump’s effect on Republicans seeking re-election in the fall.

Some political strategists said it was time for struggling candidates like Kasich and Ben Carson to drop out of the race so that there would be a more unified front against Trump.

“Trump appears increasingly unstoppable, and with each passing day, the alternatives are increasingly improbable,’’ said Steve McMahon, a Democratic strategist from the political consulting firm Purple Strategies. “If the Republican establishment really wants to stop Trump, they need to ask the candidates who clearly won’t be nominated to do what Jeb’s just done: Step aside and take one for the team.’’ 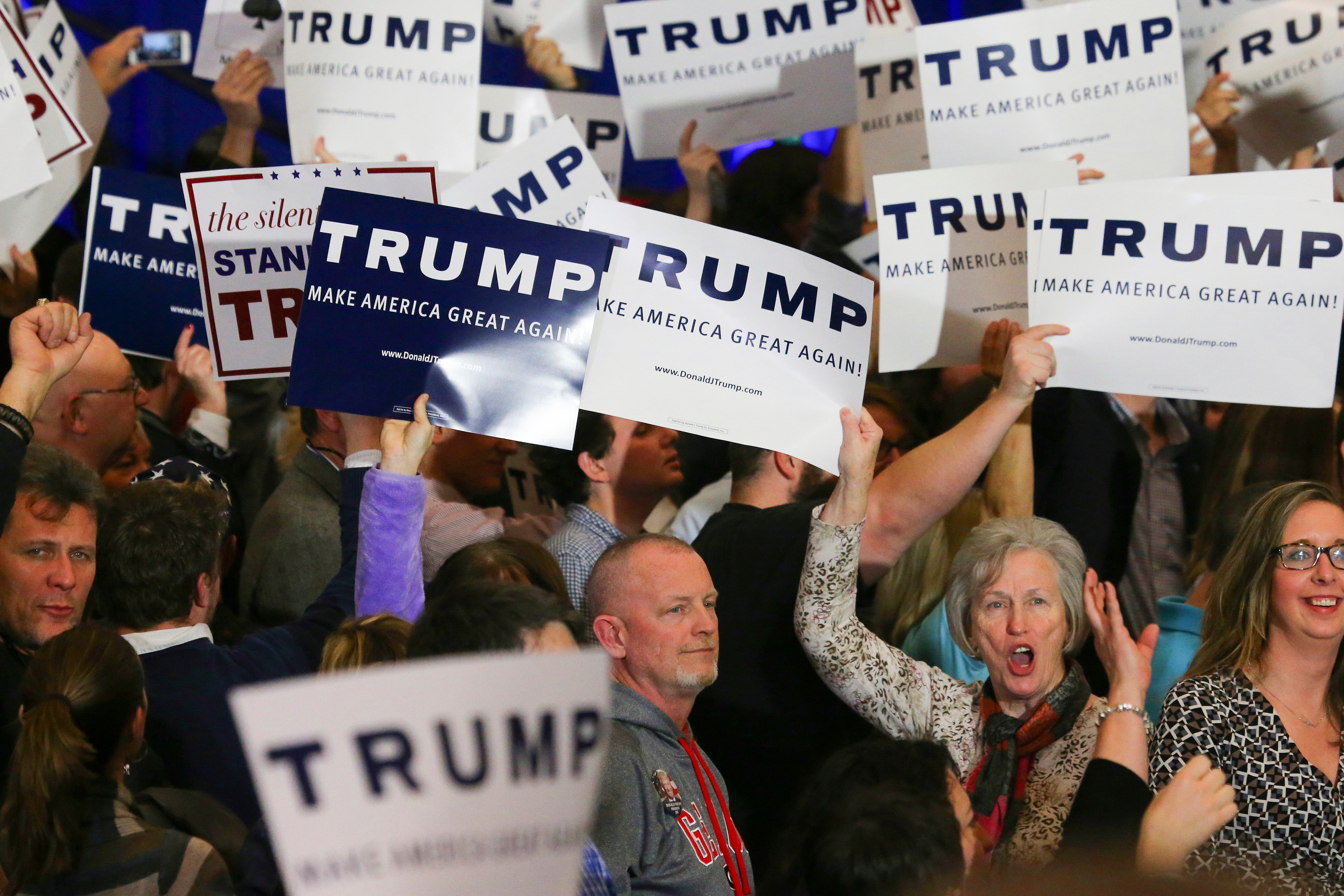 Supporters of Donald Trump at his primary night party in Spartanburg, South Carolina, on Saturday.

Others argued that too little had been done to take on Trump directly. Stuart Stevens, the top strategist to Mitt Romney in the 2012 presidential race, took issue with complaints that anti-Trump ads had failed to derail his candidacy. He pointed out that when Romney faced a challenge from Newt Gingrich, the former speaker of the House, it was a targeted, focused effort.

“No one is running a modern, focused, coordinated campaign against the front-runner as if they want to win,’’ Stevens said.

Despite the concerns, there was little evidence of either a partywide distress call or donors moving off the bench en masse toward Rubio, who has positioned himself to be the most palatable and electable remaining option to the Republican elites.

Fred Zeidman, a major Republican donor and longtime Bush family friend who had backed Bush, said he planned to take a breath and see how things played out.

The same was true for Woody Johnson, the owner of the New York Jets football team, who was Bush’s national finance chairman. An aide to Johnson pointed out that he had knocked on doors in early states for Bush and invested lots of time to help him, and he was not ready to shift allegiances so soon.

Johnson, who has long been a friend of Trump, has nonetheless found himself used as an object lesson over the last week by Trump, who named him at rallies as an example of special-interest donors who supported candidates like Bush. And in conversations on Sunday morning, there was evidence of interest among some of Bush’s former donors about possibly backing Trump.

Only a disparate patchwork of forces — the pro-Bush super PAC Right to Rise, groups backing Cruz and the anti-tax organization Club for Growth — have run ads against Trump, and most of them have done so only recently. A group called Our Principles PAC, funded heavily by a member of the wealthy Ricketts family, began airing ads in the last month. It was not yet clear whether the Ricketts family would donate more heavily after Saturday’s primary, or if Right to Rise would spend its remaining funds to stop Trump.

In the meantime, Trump made clear that he was ready for the coming onslaught. After complimenting Cruz and Rubio as “very talented people’’ in an interview on Fox News Sunday, he signaled that the pleasantries were unlikely to last.

“I start off liking everybody and all of a sudden they become mortal enemies,’’ Trump said. “We’ll see what happens.’’