Jill Stein, a perennial Green Party candidate nationally and in Massachusetts, said she’s open to a “collaboration’’ with Democratic presidential candidate Bernie Sanders — though it doesn’t seem like the Vermont senator is currently interested.

In a series of tweets Wednesday, Stein said efforts to reach out to the Sanders campaign have returned no response.

“The Democratic Party is democratic in name only – superdelegates anyone?’’ the Lexington resident tweeted shortly after, adding, “We don’t think it’s delusional to offer Americans authentic choices free from corporate influence. This election is proving we’re right.’’

The Sanders campaign did not immediately respond to requests for comment Monday and hasn’t signaled it is focused on any path forward other than the Democratic nomination.

In a fundraising email Wednesday, following losses in four of five states Tuesday, the Sanders campaign argued that the upcoming primaries — Arizona, Idaho, Utah, Alaska, Hawaii, Washington, and Wisconsin — favor their side.

“This is the high water mark for the Clinton campaign,’’ the campaign said. “Starting today, the map now shifts dramatically in our favor.’’

That count does not include the aforementioned superdelegates, unpledged party elites who can choose which candidate to vote for at the convention. When superdelegates are taken into account, Clinton’s current 300-delegate lead balloons to more than 650.

In an interview Monday with the magazine Grist, Stein said the Democratic Party has a “very clear track record of sabotaging rebels’’ and that it would be very hard for Sanders to catch up, noting the superdelegate system.

“The party does this fake go-left thing by allowing genuine reformers to be seen and heard, but they never allow them to go all the way,’’ she said. “You can’t really have a revolutionary campaign inside a counter-revolutionary party.’’

Stein was the Green Party’s presidential nominee in 2012 — recieving 469,627 votes, or 0.36 percent — and is running again for the party’s nomation in 2016. Previously, the Havard Medical School-educated physician ran for governor of Massachusetts as the Green-Rainbow Party candidate in 2002 and 2010. 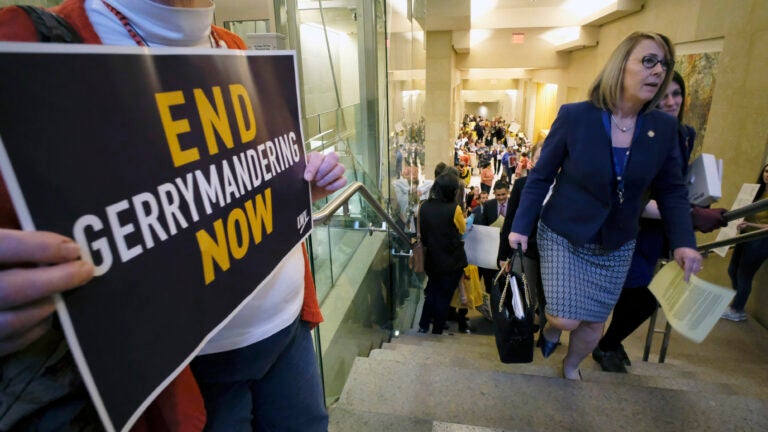 How a cure for gerrymandering left U.S. politics ailing in new ways