Days after Massachusetts Sen. Elizabeth Warren’s disparaging comments about Republican front-runner Donald Trump made her the latest target of his attacks, the controversy continued Thursday when she called him a “real threat.”

While speaking to reporters at the South Cove Community Health Center in North Quincy, Warren said she believed Trump has a real chance of winning the race for the White House.

“That’s why I am very alarmed,” she said. “I think that Donald Trump poses a real threat to this country and that’s why I think it is time to fight back against that threat.”

Warren, who called Trump a “loser” in a social media tirade Monday, also confirmed to reporters that she personally penned the now viral tweets and Facebook post that called on voters to put an end to Trump’s campaign, ensuring he remains “every bit the loser that he started it.”

“I want to be clear about this. Donald Trump claims the reason he’s qualified to be president of the United States is that he is a very, very, very, very successful businessman,” she said. “I think that means it’s appropriate to take a look at his business skills. Donald Trump inherited a fortune from his father and then he maintained it by cheating people, by defrauding people, and by skipping out on paying his creditors through Chapter 11.”

After Warren’s social media posts, The Donald fired back, taking another jab at her claims of Native American ancestry and calling her “the Indian.”

The feud seems to be at the forefront of everyone’s mind. While a guest on Boston Public Radio earlier Thursday, Warren was asked by host Margery Eagan if potential attacks based on her heritage deterred her from entering the race, a theory she adamantly denied.

“No. Donald Trump is a bully and that’s what bullies do. Scott Brown tried the same thing, and if Donald Trump thinks using Scott Brown’s old hate-filled attacks on my family is going to shut me up, then he should think again. It didn’t work before, it’s not going to work this time. I’m doing what I promised the people of Massachusetts I would do. I’m out there in Washington every single day busting my tail to try to level the playing field, to try to loosen the stranglehold that Wall Street has on our government.”

While Warren has been unwavering in her efforts to take down Trump, the senator has yet to endorse a Democratic primary candidate. When asked whether she supports Hillary Clinton or Bernie Sanders’ health care plan, Warren stuck to her usual tactic and declined to provide direct support for either.

“I think that what we’re all aiming for is the best possible health care for every single American,” she said in Quincy. “I’m glad to see the Democrats talking about that.”

Still, when asked if she thought it was time for Sanders to put his campaign to bed, Warren openly praised the Vermont senator and the role he’s played in bringing the right issues to the conversation. 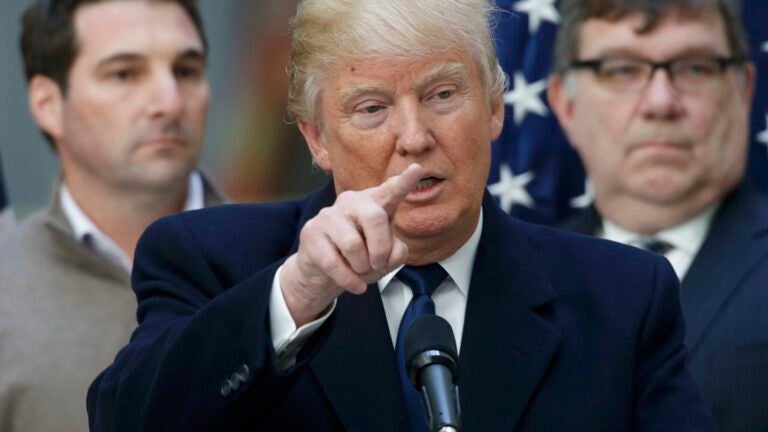 Donald Trump refers to Elizabeth Warren as 'the Indian'