Donald Trump says he is “sticking up for” his campaign manager, Corey Lewandowski, who was charged with simple battery Tuesday for grabbing a female reporter.

Speaking at length with reporters Tuesday afternoon on his plane, the Republican candidate said the charge facing the Lowell native is “very, very unfair.”

“I told him, I said ‘You should never settle this case; you should go all the way,'” Trump said, repeatedly adding that former Breitbart News reporter Michelle Fields was actually grabbing him following a press conference earlier this month.

“If you look at that tape, he was very, very, seriously maligned, ” Trump said, referring to newly released security footage of the incident.

Trump said Lewandowski was “acting as an intermediary” between Fields and himself. The Republican candidate also said the charges were overblown.

“You take a look at her initial statement,” Trump said. “It sounded like she got thrown out of a building.”

In her original first-person account, the 28-year-old reporter wrote:

I was jolted backwards. Someone had grabbed me tightly by the arm and yanked me down. I almost fell to the ground, but was able to maintain my balance.

On Tuesday, Fields tweeted that her story has “never changed.”

“She did get bruises on her arm,” a reporter on the plane said Tuesday, pushing Trump on his suggestions that Fields had lightened her description of the incident since security footage became available.

Shortly after the incident, Fields tweeted a photo showing what appeared to be bruises on her forearm, where she said Lewandowski grabbed her.

I guess these just magically appeared on me @CLewandowski_ @realDonaldTrump. So weird. pic.twitter.com/oD8c4D7tw3

According to a campaign statement Tuesday, Lewandowski is “absolutely innocent” and will plead not guilty.

A spokeswoman for the Trump campaign told CNN on Tuesday that Lewandowski will “absolutely” keep his job. 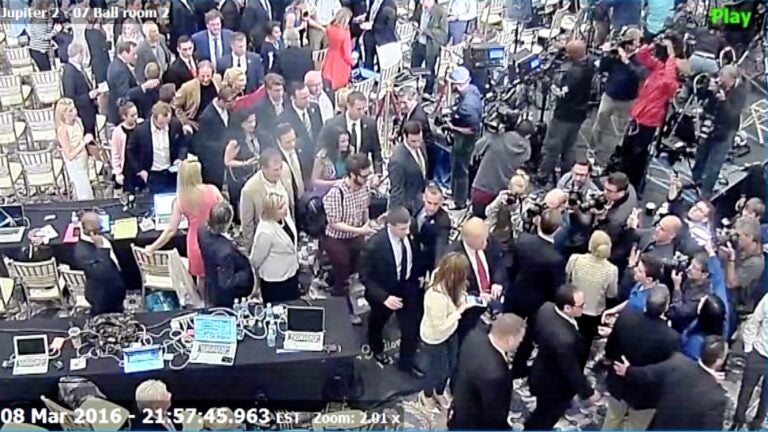