With Monday’s tax filing deadline looming over many Americans’ weekends, Sen. Elizabeth Warren’s new bill may seem like a godsend.

The Massachusetts Democrat introduced legislation Wednesday that would allow U.S. taxpayers to have the government do their taxes for them—for free.

The conveniently timed “Tax Simplification Act of 2016” would direct the IRS to develop a free, online tax preparation and filing service, using tax information the IRS already has, which Americans could choose to use to have their taxes filed directly with the government, instead of using a third-party service, such as TurboTax.

“This year, taxpayers will spend an average of 13 hours preparing and filing their returns, and will pay $200 for tax preparation services – a cost equal to almost 10 percent of the average federal tax refund,” Warren said in a statement.

Since the IRS already gets individual wage statements (W2) from employers and 70 percent of taxpayers do not itemize deductions, according to Tax Policy Center, return-free filing could completely eliminate the requirement to file a tax return for 8 million to 60 million households, and make the process a lot simpler for others.

It isn’t a particularly new idea. President Ronald Reagan endorsed the return-free filing in 1985. So did President Barack Obama during his 2008 campaign. Denmark, Spain, and Sweden, among other countries, already send their citizens pre-filled-out tax returns to be approved and sent back.

“For many taxpayers, it would take minutes instead of hours to complete their taxes,” Warren’s staff wrote in a report Wednesday.

ProPublica reported in 2014 that switching over to such a system would save “a collective $2 billion and 225 million hours in prep costs and time,” and, as President Obama said, “an incalculable amount of headache and heartburn.”

In a recent first-person essay for Vox, an American citizen living in Sweden explained what the process looked like there.

The four-page tax form comes in the mail already filled out. On a Saturday morning, [my wife] and I take our coffee to the couch and review the forms. Seeing they look reasonable, as they always do, we “sign” with a text from our phones. In 15 minutes we are done. We don’t have to hire a tax consultant, and we avoid fights about whether a print cartridge bought at the drugstore is a business expense or not.

So why do Americans continue to fill out their tax returns themselves?

As Warren’s staff, ProPublica, and others have reported, the tax preparation industry has lobbied extensively against past efforts at reform. Intuit, maker of TurboTax, recently spent $11.5 million on federal lobbying over five years on a range of issues, including the opposition of “IRS government tax preparation.” Intuit’s lobbying disclosures also show that the company lobbied on a number of ultimately unsuccessful bills seeking to jump-start return-free filing.

According to ProPublica’s 2014 report, TurboTax’s software accounted for more than half of individual returns filed electronically and TurboTax products and services made up 35 percent of Intuit’s total revenue.

Speaking of which, Warren’s bill would also ban the IRS from entering into agreements that “restrict its ability to provide free online tax preparation or filing services.”

The IRS currently works with private tax preparation companies on “Free File,” a program which offers free filing to relatively-lower-income earners—supposedly 70 percent of American taxpayers. However, only 3 percent of those eligible actually take advantage of the services.

In 2006, the National Taxpayer Advocate, an independent “voice of the taxpayer within the IRS,” called for the Free File system to be dismantled in favor a better free electronic filing system.

Bernie Sanders, who is one of the seven cosponsors Warren’s bill, blasted the “absurdity” that is the process citizens must go through to file their taxes.

“Tax Day has become an opportunity for corporations to profit off of confusion over our complicated tax code,” the Vermont senator said in a statement. “That is wrong. … We must make tax filing as easy as possible, not direct profits to private companies at the expense of working families.”

Sanders’ Democratic rival, and front-runner in the primary race, Hillary Clinton, applauded Warren’s work and promised to “simplify the tax system for working families” as president.

“This important piece of legislation will help us build a better, fairer tax system,” Clinton said in a statement. “This proposal will help take the headache out of Tax Day, saving Americans both time and money. Special interests who benefit from the system’s current complexity need to stop standing in the way of progress.” 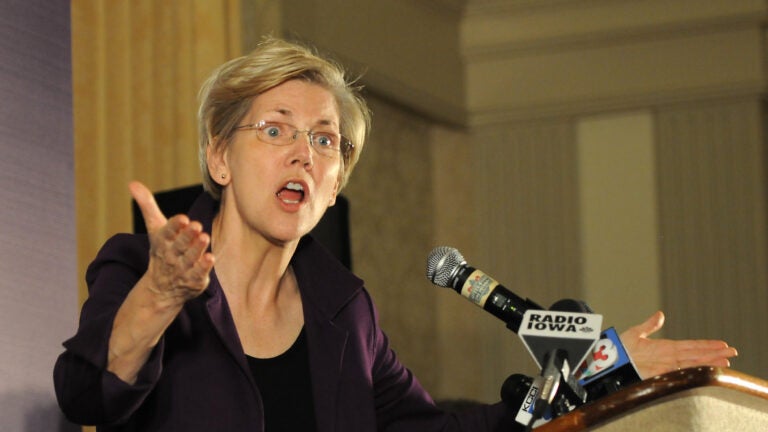