In the battle over whether to legalize recreational marijuana in Massachusetts, opponents have repeated one main refrain: think of the children. The crux of their argument? That legalizing marijuana will lead more adolescents and teens to use the drug.

“Where marijuana is legal, young people are more likely to use it,” wrote Mayor Marty Walsh, Gov. Charlie Baker, and Attorney General Maura Healy in the second paragraph of their Boston Globe editorial against legalizing weed.

But are kids really more likely to get high when marijuana is legal for adults? At this point—with only two years of recreational sales in two states and even less time elsewhere in the U.S.—it’s hard to tell. Experts say there hasn’t been enough time to seriously gather the effects of legalization across the country.

“We have two years of data on what happens when you legalize cannabis,” said Ryan Vandrey, a behavioral pharmacologist with an expertise in cannabis at the Johns Hopkins School of Medicine. “I don’t think that’s long enough to fully understand and grasp the nature of change.”

“I would take the study with a grain of salt because they’re a little too soon, to be quite honest. That goes for either side. We just have not had enough time to study the effects,” said Rev. Richard McGowan, a Boston College statistician who studies vice industries like gambling and drugs. “[Voters’] personal experience right now is probably just as good as any study they’ll see.”

Notably, the pro- and anti-legalization efforts both point to Colorado, the first to market with retail stores after voters chose to legalize in 2012, to bolster their case. One study suggests adolescent usage is up, the other suggests it’s down. The numbers cited on both sides so far come with their own sets of issues.

Ahead, a look at where both sides stand. 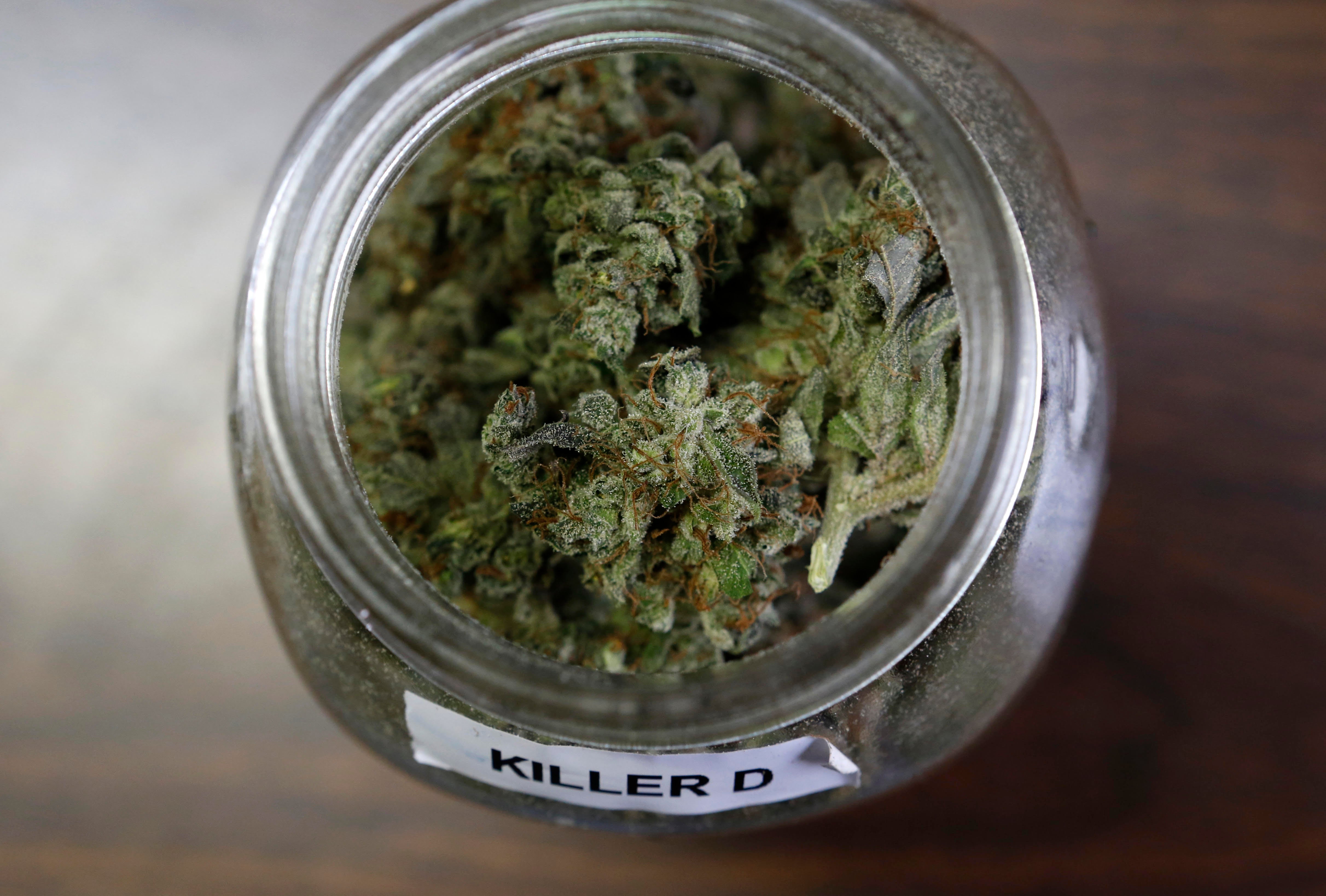 In this April 22, 2016 photo, a jar containing a strain of marijuana nicknamed “Killer D” is seen at a medical marijuana facility in Unity, Maine.

What the opponents say:

The Campaign for a Safe and Healthy Massachusetts, the anti-legalization group backed by Walsh, Baker, and House Speaker Robert DeLeo, has prominently put concerns about adolescent and teen access to the drug on its website.

“Since becoming the first state to legalize, Colorado has also become the No. 1 state in the nation for teen marijuana use,” the site reads. “Use by teens aged 12-17 jumped by over 12 percent in the two years since legalization, even as that rate has declined nationally.”

The argument is based on federal data that anti-legalization groups across the country were quick to pounce on.

The study says that comparing 2012-2013 data with numbers from 2013-2014 effectively creates a comparison between 2012, prior to legalization, and 2014, post-legalization. The difference marked a 12.5 percent increase.

The study itself mellows the point, too. It says the change in Colorado was not statistically significant. For the study’s purposes, that meant Colorado “experienced no change in past month marijuana use” between the two periods.

When the 2014 data was released, the head of the state’s Department of Public Health said Colorado had always been near the top of the list and was within the margin of error for No. 1 in the earlier research. Colorado’s rise to No. 1 from No. 3 is mostly attributable to a smaller increase in Vermont, previously ranked No. 2, and a sharp drop in Rhode Island, which had ranked first.

Opponents say a legal market that could include cannabis-infused candy or soda will draw in adolescents or lead to accidental consumption. Even if the data so far is unclear, any evidence that it will lead more teens to use pot is reason enough not to take it up, opponents say.

“Once we allow the commercial marijuana industry into Massachusetts, we can not undo its impact, and the evidence of harm to young people is a significant reason to pause to learn more before rushing forward with this ballot question,” spokesman Corey Welford said in a statement.

That the federal data shows youth usage increased after medical marijuana expanded in Colorado in 2009 is indicative that relaxed laws lead to increased teen usage, legalization opponents also say. The relevance of that argument is arguable itself: Massachusetts already legalized medical marijuana in 2012, but only a handful of dispensaries have opened so far.

Another study, published last year in The Lancet, the peer-reviewed science journal, countered the medical argument through a nationwide look at medical marijuana laws across the country as well as 20 years of adolescent usage data. It concluded that states with medical marijuana laws had higher rates of adolescent usage, but that those states were always among the highest, and passage of such laws didn’t have any effect on the rate of usage.

The study did leave open the possibility that societal acceptance of marijuana, rather than laws allowing it, increases teen usage—a line of thinking shared by some researchers and scientists. 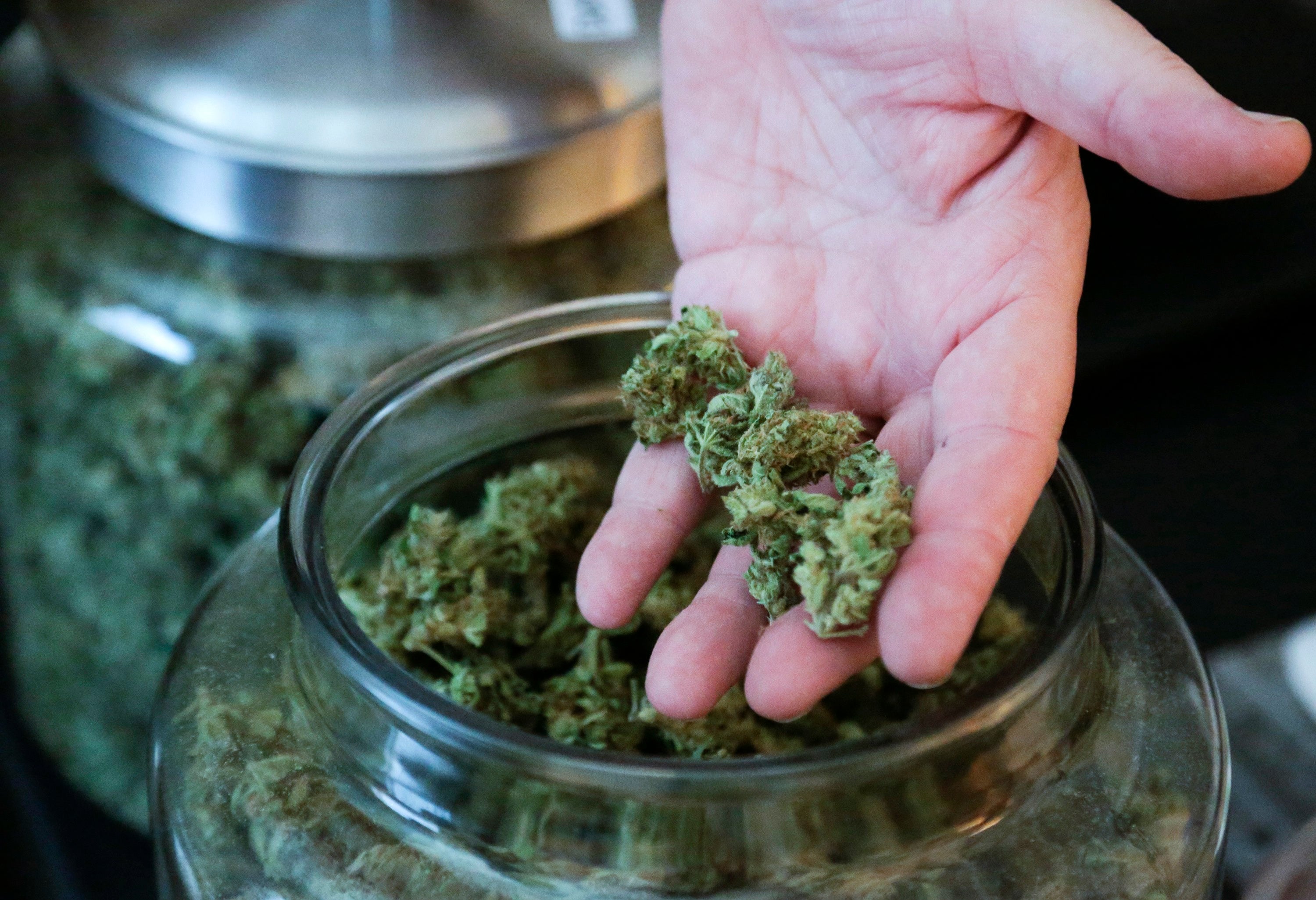 Bob Leeds, co-owner of Sea of Green Farms, shows some of the marijuana he produces during a tour of his company’s facility in Seattle, Washington June 30.

What the proponents say:

Meanwhile, the ballot question’s chief supporters in the Campaign to Regulate Marijuana Like Alcohol offer data they say suggests otherwise.

The proponents think they are bolstered by a survey out of Colorado taken every two years at schools. They compare data from 2011 to 2013, the first time the survey was taken after voters legalized the drug in 2012.

The 2013 survey found slight drops from 2011 in the percentage of high school and middle school students who reported using marijuana either in the last 30 days or in their lifetimes. The pro-marijuana campaign also notes that 40,000 students took the 2013 survey and say it represents a sizable data pool.

Marijuana possession became legal in Colorado in 2013, but stores did not open until 2014, so the survey does not factor in the effect of retail sales.

Additionally, the 2011 and 2013 surveys were conducted with different methodology, as the survey’s size vastly expanded in 2013. The 2015 survey is expected to be released in June, and many in the industry are awaiting it for more of an apples-to-apples comparison to 2013, while also accounting for the launch of retail in the state.

Opponents also say that the 2013 study’s data set is not optimal because it does not include one of the state’s largest school districts, which opted out of participating in the 2013 survey.

Jim Borghesani, the communications director for the Campaign to Regulate Marijuana Like Alcohol, says the status quo is more dangerous to young people.

“Nothing could possibly be worse than the system that exists today for teen use because it’s completely unstructured or unrestrained,” he said. “We think that putting sales in the hands of business that do check IDs will be a huge improvement. We think that’s just common sense.”

Borghesani thinks there’s data to back that point up, too, from recent research out of Washington, which legalized pot in 2012. According to the study, 54 percent of teenagers said they had easy access to marijuana in 2014, compared to 55 percent in 2010.

However, one of the researchers said that it was “somewhat concerning” that ease of access to marijuana hadn’t really budged in the four years, while teens said alcohol, cigarettes, and other drugs became more difficult to access during the same period.

Dr. Timothy Wilens, an addiction and child psychiatry expert at Massachusetts General Hospital who has advised the anti-legalization campaign on youth issues, thinks that’s an important distinction in the various studies.

“What we’re not seeing is a decline,” he said.

Like other researchers, Wilens also said data from Washington, Colorado, and elsewhere is too young to draw any real conclusions.

“It’s probably at this point a mild increase, but still, that’d be debatable,” he said. “We’re just almost too early. That’s why you’re seeing the same data spun different directions.”

That’s one point where both sides may actually agree.

“One thing I’ve found on this is that there are so many contradictory reports that you can probably have a debate throwing reports at each other,” said Borghesani. 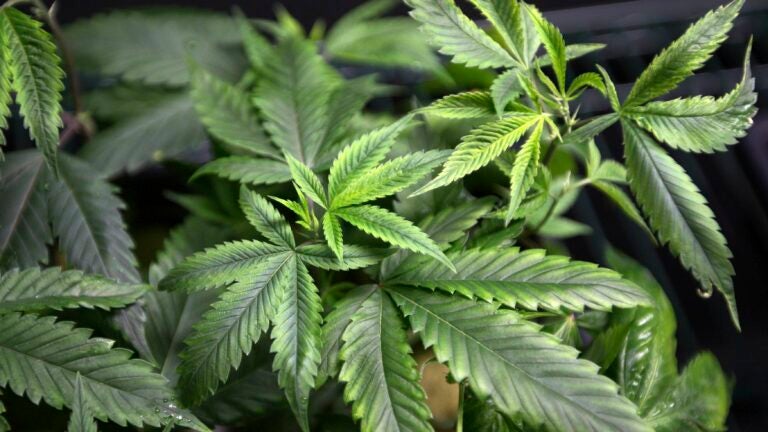