Whether a proposed question about the sale of cage-free eggs will appear on Massachusetts voters’ ballots this November is now up to the state’s highest court.

Protect the Harvest Action Fund, a nonprofit group that advocates for affordable food and farmers’ rights, backed a lawsuit filed in April opposing the proposed question that would, in part, mandate all eggs sold in Massachusetts come from cage-free hens.

The state’s Supreme Court is expected to hear arguments on the lawsuit Wednesday.

Here’s what you need to know about the question, the lawsuit, and what it all may mean for your grocery bill.

The ballot measure, backed by the Humane Society of the United States and other animal welfare groups, proposes that Massachusetts farms and businesses produce and sell only eggs from cage-free hens. Under the ballot item, each hen would have to have access to at least 1.5 square feet of usable floor space.

The initiative would also prohibit the production or selling of pork from pigs raised in small crates and veal from calves raised in tight enclosures. If approved, the ban would be in effect by 2022.

There is currently only one Massachusetts farm using battery cages for egg-laying chickens, and no farms in the state using small cages for pigs and calves, according to MassLive—meaning if the question was to make the ballot and voters say yes to it in November, egg producers outside the state would be hit the hardest.

The initiative collected 133,000 signatures that were submitted to the secretary of state’s office and certified in December, according to MassLive. For a question to be considered for the ballot, the proposal must get at least 64,750 valid signatures.

In May, the proposal was put before legislature, which chose not to enact the initiative. This means for the question to qualify for the November ballot, petitioners need to collect and submit 10,792 additional signatures to the state by July 6.

But Protect the Harvest Action Fund is hoping the proposed question won’t be allowed to go that far.

A lawsuit was filed at the end of April by Diane Sullivan, a poverty advocate and formerly homeless mother of five, and James Dunn, a farmer who sells eggs in Massachusetts, according to The Boston Globe. Both were recruited by Protect the Harvest Action Fund, which is paying for the case’s lawyers, the fund’s executive director, Brian Klippenstein, told the Globe.

The plaintiffs dispute Attorney General Maura Healey’s approval of the measure’s language, saying the question defies a constitutional requirement that ballot initiatives can only contain subjects that are related, the Globe reported.

The Humane Society said they think the lawsuit is a ploy by Big Agriculture, noting one of the plaintiffs’ lawyers, Jon Bruning, is a former attorney general of Nebraska who claims expertise in defending “livestock producers’ ability to raise and care for their livestock,” according to the Globe.

The question is an attempt to protect farm animals from what the Humane Society characterizes as inhumane treatment.

Factory farm hens currently spend their entire lives in battery cages with space equal to about two-thirds of a letter-sized sheet of copying paper, the Humane Society describes on its website. In some cages, laying hens can’t spread their wings.

The society also says the animals’ inhumane treatment can lead to increased antibiotics usage, which is used to fight infections common from living in close proximity to other animals and to make animals grow faster. But as a result, animals can become resistant to the drugs—the same way humans eating these animals can.

The advocacy group ramped up the fight for the law by releasing an undercover video taken at a Maine egg farm that supplies to Massachusetts stores. The video released Tuesday—the day before the lawsuit hearing—shows chickens packed in tight cages, trampling on carcasses of dead hens.

The Humane Society said the video, taken by a worker at the facility, shows how the egg industry’s practices are detrimental to both animals and public health.

If the ballot measure were to pass in November, the rise in prices at the grocery store would further exclude groups of people from access to affordable, healthy foods, according to plaintiff Diane Sullivan.

The ban on eggs from states that don’t meet these cage-free conditions is what’s expected to drive up the price of your breakfast—but exactly how much is under much contention. Prices could jump anywhere from 12 cents more per dozen on the low end to 80 cents or more per dozen on high end, according to a Globe report.

The group also says the switch from conventional cages to a cage-free system may not be the more humane option for the birds. The group says a Coalition for Sustainable Egg Supply study found higher bird mortality and injury rates in cage-free systems due to cannibalism and disease.

The state Supreme Judicial Court will hear the case Wednesday.

If found unconstitutional, the question will not be on the November ballot.

If found constitutional, Protect the Harvest Action Fund told the Globe it plans to run a campaign to try to defeat the ballot push. But ultimately, the measure would be up to voters to decide on this November—that is, if it collects enough signatures before the July deadline. 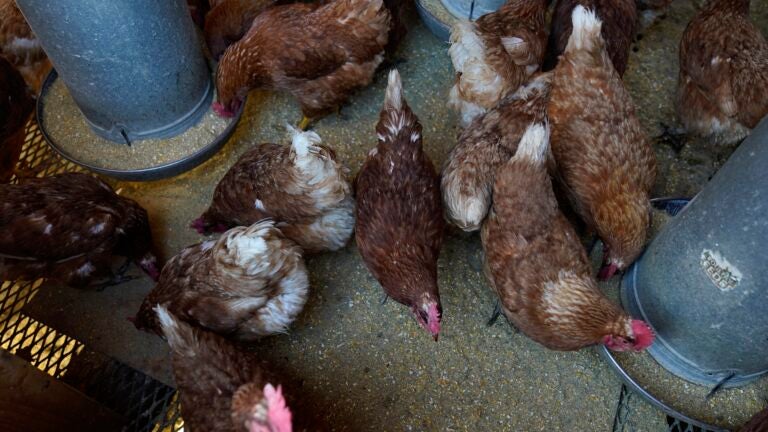