A photo of Rep. Seth Moulton holding a military assault rifle graced the cover of the New York Daily News on Wednesday morning, along with an op-ed from the freshman congressman calling for a ban on assault rifles.

A look at tomorrow’s front page…
Hey @NRA, Marine says “NO CIVILIAN SHOULD OWN THIS GUN” https://t.co/dDrxtVLUgs pic.twitter.com/1cngdNzvNu

“Hey, NRA: This Marine served in Iraq & he says assault rifles should be banned,” the text reads. “Does that make him a gun-grabbing commie, too?”

Moulton, a Democrat who represents Massachusetts’s 6th congressional district, argued in a corresponding column for banning assault rifles like the one used to kill 49 people and injure 53 more at an Orlando gay nightclub early Sunday morning.

I’m a Marine. I carried guns every day in Iraq, guns very similar to the ones used to perpetrate the Orlando murders and many other mass shootings in America. I’ve used guns in combat. On more than one occasion, guns have saved my life. But there’s a big difference between a U.S. Marine with a rifle and a civilian with a gun.

I trained for years in order to use my weapon properly. And long before I ever aimed it at an individual, I had to look at pictures of dead and mangled bodies in order to understand the magnitude of what it meant to pull that trigger.

So believe me when I tell you: There’s simply no reason for a civilian to own a military-style assault weapon. It’s no different than why we outlaw civilian ownership of rockets and landmines.

Moulton is one of a number of Democratic political leaders pushing for gun control reform in the wake of the deadliest mass shooting in U.S. history.

On Monday night, Moulton and fellow Democratic representative Katherine Clark walked off the House floor during a moment of silence held for the shooting victims. In a tweet, Moulton said that the silence “underscor[ed] their cowardly silence on even VOTING on gun reform.”

In his Daily News op-ed, Moulton targeted the rote “thoughts and prayers” tweet, and called on Congress to act to remove dangerous assault rifles from people on the terrorist watch list.

“Most in Congress know this. They know that something is wrong in our country when massive murder sprees become routine. They simply lack the political courage to do something about it,” he writes. “So, spare these innocent victims your thoughts and prayers.” 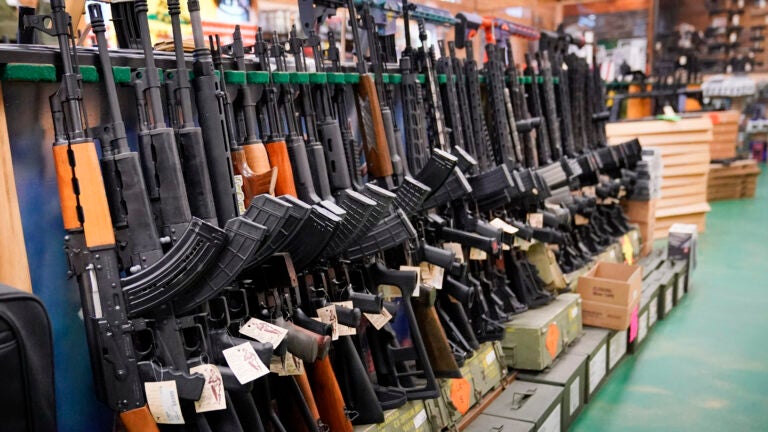