Deep-blue Massachusetts has a recent history of marijuana-friendly votes. In 2008, voters turned out in droves at the ballot box to decriminalize possession of less than an ounce of pot. Four years later, advocates were rewarded with a landslide victory to legalize medical marijuana in the state.

The third act is set for November, when Massachusetts voters will be asked whether they want to legalize marijuana and permit retail sales in the near future. Supporters say the initiative would treat marijuana similarly to alcohol, replacing today’s vibrant illegal market with one overseen by the government and creating a new source of tax revenue for the state.

The last two votes have been widely seen as reason for confidence in the pro-pot campaign, coming in successive presidential elections, which traditionally have higher turnout of marijuana-friendly young voters. Successful pushes to legalize marijuana in Colorado, Washington, Alaska, and Oregon since 2012 have also been encouraging.

But since the spring, things haven’t looked quite as hot for local pot advocates.

The most recent polling has suggested Massachusetts voters may be having second thoughts about full legalization ahead of the fall’s campaign. In May, one poll found a 46-43 percent advantage for the opposition. Another poll in July found a 10-point lead for the ‘no’ crowd.

“I was surprised by the last two polls,” said Steve Koczela, president at the MassINC Polling Group. “The trend did seem pretty clear.”

There are caveats, of course. Prior to the recent polls, data in Massachusetts and across the country indicated widespread support for legalization and seemed to suggest a layup at the ballot this year. As recently as April, a poll showed 57-35 percent support for passing the proposed law.

Koczela cautioned that ballot question polling is volatile and can swing wildly, especially before ads start airing and the campaigns really swing into gear.

And Jim Borghesani, spokesman for the pro-legalization Yes on 4 campaign, said both surveys may have under-sampled the young voters that his campaign is relying on. The May poll was also within the 4.4 percentage-point margin of error, meaning that it doesn’t even really show advocates to be trailing in the first place.

It does, however, portend a close race. Even to Borghesani, the dispute over Question 4 is not shaping up to be the kind of blowout advocates saw in 2008 and 2012.

“We know this race is going to be close,” he said. “We’re not taking anything for granted. We never have.”

And recent polling aside, those following the issues see a number of factors that could make the legalization, regulation, sale, and taxation of marijuana in liberal Massachusetts a harder sell than you might think.

Ballot question campaigns generally face an uphill battle because a vote for ‘yes’ means something has to change. If a voter isn’t certain about an issue, he or she may is more likely to default to ‘no.’ And despite Massachusetts’ reliably liberal voting record, the state also has a well-worn reputation for skepticism about change.

Opposition campaigns can be successful by zeroing in on specific language within the law, Koczela said.

“The thing that ‘no’ sides often do is add complexity,” Koczela said. He pointed to a 2012 initiative to legalize physician-assisted suicide, which saw a polling swing in 2012 before failing amid questions about specific provisions.

“What we are asking voters to do is not think of this as the concept of legalization, but think of and vote on a very specific proposal at a specific time,” Corey Welford, a spokesman for the Campaign for a Safe and Healthy Massachusetts, said in a May podcast with CommonWealth magazine.

In short, the law would:

But there’s plenty of room for opponents to harp on specifics of the ballot initiative, which is 24 pages long.

The Campaign for a Safe and Healthy Massachusetts points to the fact that the law would allow for the sale of edible marijuana, arguing it could come in the form of candies, cookies, or beverages — and thus make pot more attractive to children. (Broader concerns about young people’s welfare have been a common theme of the campaign, though data out of Colorado has not shown a clear effect on teen usage.)

By way of a rebuttal, the pro-pot contingent says the law will allow a new regulatory body to ban edible products or packaging that is too child-friendly. The opposition retorts that if that was the intent of the law, it would be explicitly included in its text.

At that point, the debate reaches something of a stalemate — but it plays to the opposition’s advantage to be so deep in the weeds rather than talking about legalization as a broader concept.

Koczela thinks it’s possible the opposition also got a polling bounce from organized opposition from high-profile politicians. The two recent figures showing more support for the ‘no’ side came after the state’s political power players formally launched their campaign.

“The last two were done as the ‘no’ side kicked into gear,” Koczela said. “So that certainly may have something to do with it.”

Sure, the pro-pot campaign has collected a few city councilors, a Western Massachusetts mayor, 10 state legislators (most of whom occupy the progressive wing of the state’s Democratic party), and a former governor (Bill Weld, who is running for vice president on a pro-legalization ticket with the Libertarian party) in its corner. Sen. Elizabeth Warren, a liberal leader of national prominence, has not endorsed legalization but said in a statement that she is “open to the idea” because of the lack of regulation in the current illegal market.

But the opposition has the clear numerical advantage in terms of elected officials. In addition to Baker, Walsh, DeLeo, and Healey, nearly 120 other state legislators have come out in opposition.

Borghesani, with the pro-pot campaign, notes that high-profile politicians – including the governor and the mayor of Boston – opposed the 2008 and 2012 votes, and came out on the losing end of routs. Koczela also suggested that if the polls did in fact respond to the formal unveiling of the opposition campaign, it may ultimately prove to have been a temporary shift, almost like the bounce presidential candidates get from party conventions.

Even Walsh, who plans to be active around the issue through the fall, has some doubts that he will have much of an effect on the outcome.

Some marijuana reform advocates worry that, with several states trying to legalize this election year, fundraising could present another obstacle.

The Marijuana Policy Project, a national political organization that has long pushed reform initiatives, is also behind legalization campaigns in Arizona, California, Maine, and Nevada.

That’s in stark contrast with the last presidential election in 2012. Though two states legalized marijuana, only Colorado’s initiative was backed by MPP. With five state ballot questions – not to mention three other medical marijuana questions in other states – some activists are concerned that MPP could be stretched too thin this election cycle.

“There’s only so much resources and staff time in the movement,” said Tom Angell, who runs the advocacy group Marijuana Majority. “Only so much money that can go toward putting ads in the air.”

Mason Tvert, a spokesman for MPP, pish-poshed that particular worry.

But the local pro-legalization camp does admit that fundraising has its challenges this year. Borghesani said he doesn’t think the problem is the number of states on the ballot, but rather that Massachusetts’s own liberal reputation may cause potential donors to see legalization as inevitable and not in need of money.

In a recent national fundraising email, Troy Dayton, a MPP board member who also runs a pot industry investment network, cited both ideas when listing reasons why all of the campaigns across the country are “underfunded.”

“1. Marijuana has never been on 8 ballots at the same time so the total amount needed to be raised is more than has ever been raised for this issue,” he wrote. “2. The media has done a good job of leading people to believe legalization is inevitable when it is not. This creates a false sense of security for supporters.”

Additionally, pot advocates across the country have been growing frustrated with the businesses seeking to get in on the legal market that aren’t pitching in enough money.

Yes on 4 hopes to raise $3 million ahead of November and has already booked some ad space, Borghesani said. The funding situation for the opposition is unclear, as the Campaign for a Safe and Healthy Massachusetts declined to name a fundraising target and has not publicly discussed its donors. Both sides must file campaign finance disclosures with the state in early September, which will provide the first insight into the race’s financial situation since last winter.

Sam Tracy, who works for the marijuana business consultancy 4Front Ventures, which has donated office space to the legalization campaign, has one other worry about national political dynamics and how they could affect the state’s pot race.

While past Massachusetts ballot questions have been aligned with presidential races, in part to take advantage of the heightened number of young voters, Tracy theorizes that Hillary Clinton and Donald Trump are each so disliked by young people that those voters may stay at home to the detriment of the legalization bid.

“Youth turnout [is] going to have to come down to getting people excited about this question specifically,” he said. “Youth is our strongest demographic.”

Koczela, the MassINC pollster, said the unpopularity of the major party candidates might “numb” turnout a bit, but doesn’t see it as a major challenge to the question’s viability.

“It’s certainly better than having it in a midterm,” he said.

In other words, even with sagging polls, there’s no time like the present for pro-pot forces. For that matter, there’d also likely be no other time soon if the effort falls short. The Massachusetts constitution bars ballot questions that are “substantially the same as any measure” that previously failed at the polls from appearing before voters again for six years. 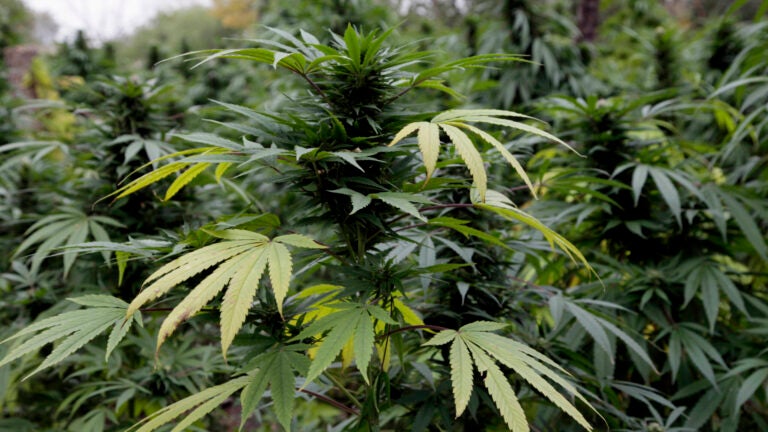 The hidden political conflicts in the marijuana legalization debate