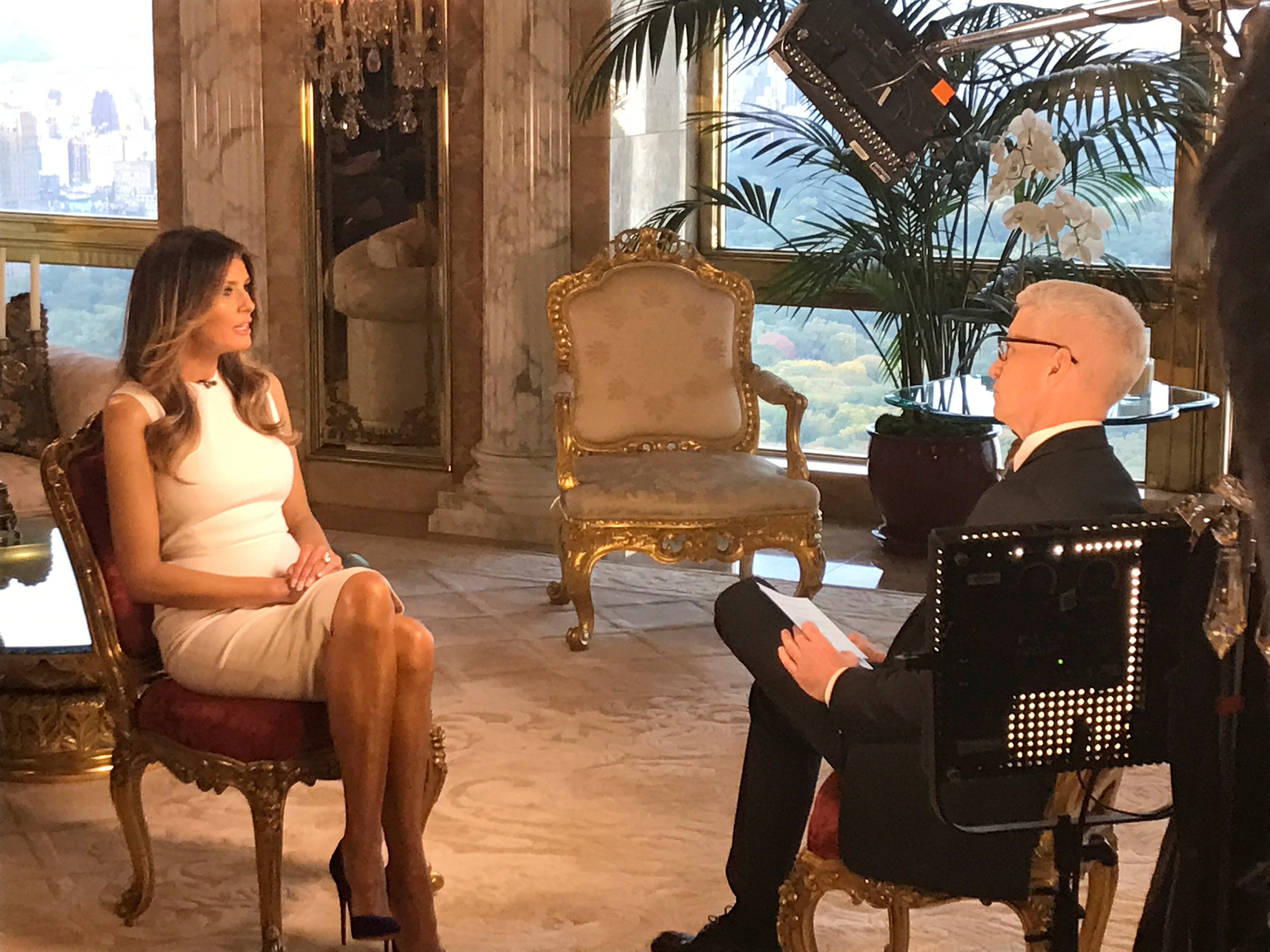 NEW YORK (AP) — Melania Trump on Monday dismissed her husband’s sexually aggressive language as ‘‘boy talk,’’ insisting his remarks do not reflect ‘‘the man I know,’’ and said she does not believe that he has assaulted any women.

Trump’s wife, in a series of media interviews, said she has accepted her husband’s apology and the couple is ‘‘moving on.’’ The comments come more than a week after the release of a 2005 video in which Trump brags about kissing women and grabbing their genitals without their permission.

‘‘I said to my husband that, you know, the language is inappropriate. It’s not acceptable. And I was surprised, because that is not the man that I know,’’ she told CNN.

She suggested that Trump may not have known his microphone was on, calling it ‘‘kind of a boy talk’’ that ‘‘Access Hollywood’’ host Billy Bush was encouraging. And she suggested that the women who have claimed in recent days that Trump made unwanted advances were attention-seekers who were making ‘‘damaging and unfair’’ accusations.

‘‘I believe my husband,’’ she said in the interview that aired Monday night. ‘‘My husband didn’t do anything.’’

Mrs. Trump also said it is fair game for her husband to appear with women who have accused former President Bill Clinton of sexual assault, claiming the Democrats fired the first volley into the increasingly ugly war about the couples’ private lives.

‘‘They’re asking for it. They started. They started from the beginning of the campaign putting my picture from modeling days,’’ she said in excerpts released by Fox News ahead of the interview’s broadcast. ‘‘That was my modeling days and I’m proud what I did. I worked very hard.’’

“If they bring up my past, why not?” @MELANIATRUMP tells @ainsleyearhardt that Bill Clinton’s past is fair game on the campaign trail pic.twitter.com/B9zPqIeCNh

Melania Trump’s image was used in a negative ad campaign during the Republican primary, but there is no evidence that the Clintons were involved. At the time, Donald Trump accused former rival Ted Cruz of being involved and responded by tweeting an unflattering image of the Texas senator’s wife. Cruz also denied involvement.

The interviews are Melania Trump’s first moments in the public eye since the accusations over the last 10 days that have sent her husband’s White House bid reeling.

First, a 2005 video leaked of Trump using vulgar language to describe women and apparently boasting of sexual assault. And in recent days, several women have come forward to say that Trump had groped or sexually assaulted them.

The Republican nominee has denied the claims, calling the women liars and belittling their appearances.

In the interviews, Melania Trump deemed the celebrity businessman’s comments on the leaked tape ‘‘offensive to me and they were inappropriate.’’

‘‘And he apologized to me,’’ she said in an interview with CNN airing at the same time the crowd at her husband’s rally in Wisconsin was chanting ‘‘CNN sucks.’’ ‘‘And I expect — I accept his apology. And we are moving on.’’

She said something similar in a statement released by the campaign after the video’s release. She has also demanded retractions from a People Magazine writer who profiled the couple in 2005 and last week accused Donald Trump of an assault at the couple’s Florida home, Mar-a-Lago, while Melania was out of the room. And she repeated her husband’s assertion, which he makes without supporting evidence, that the media and Clinton campaign are working in tandem to sink the Republican nominee’s campaign.

Melania Trump has never filled the role of the traditional political spouse, only making rare appearances on the campaign trail. Her speech at July’s national convention was initially praised until it was discovered that passages of it were lifted from Michelle Obama’s 2008 convention address.

Trump, who attended each of the first two presidential debates, was also lampooned on this week’s Saturday Night Live. The long-running sketch show ran a video in which actresses playing Melania Trump, her two step-daughters and two of the candidate’s most visible female allies did a version of Beyonce’s feminist manifesto ‘‘Lemonade’’ in an act of rebellion against the candidate.

The video ends with the Cecily Strong, the comedian playing Melania Trump, suggesting she wrote the song herself.

AP writer Steve Peoples in Washington contributed to this report. Reach Lemire on Twitter at http://twitter.com/@JonLemire