The Pizza Party is already an official political designation in Massachusetts, but Gov. Charlie Baker and several top state legislators formed their own group at Santarpio’s in the name of unity.

“Regardless of affiliation we’re all members of the pizza party,” wrote state Sen. Joe Boncore, a Winthrop Democrat, of the bipartisan Election Day lunch.

Lunch break at #santarpios from a divisive election cycle. Regardless of affiliation we’re all members of the pizza party #mapoli #eday pic.twitter.com/E9kfm2P7qG

While at least one of his fellow diners appears to be using a fork, it was not immediately clear whether Baker used a fork to consume his pizza (a critical misstep made too often by fellow politicians). The governor does appear to be using a napkin, which would seem to indicate he picked up his slice with his hands.

Neither Baker’s office nor Boncore immediately responded to requests for further information. Perhaps something else more important is going on today.

Update: Boncore called back to respond to the “million-dollar question,” as he put it. No forks were used by anyone for pizza, he said. Rather, the group also had ordered steak tips, for which utensils were utilized.

Boncore also noted that it has been a tradition dating back 50 years for East Boston politicians to host lawmakers for an Election Day lunch break. He described the event as an “informal meeting” to “shoot the breeze” on all things other than politics.

“In an election where the national discourse has reached fever pitch, this is an opportunity to set aside differences and come together as a community,” Boncore said in a previously released statement he provided. “It’s an inclusive event: regardless of political affiliation, we’re all members of the pizza party.” 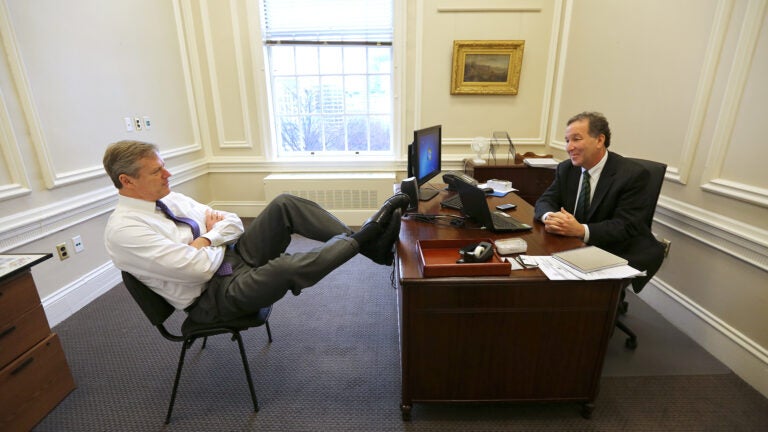