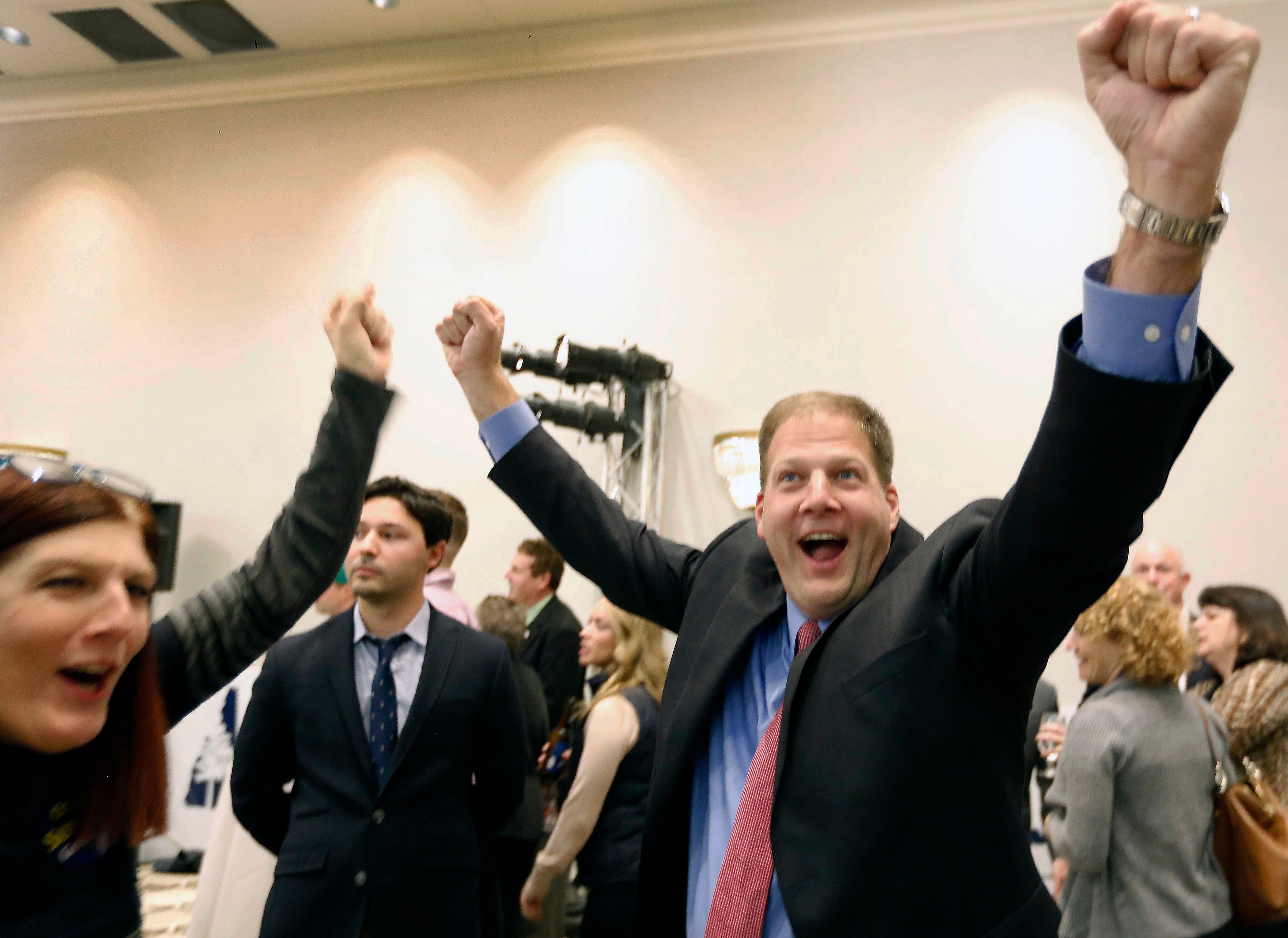 Republican Chris Sununu cheers as early results showed him in the lead over Democrat Colin Van Ostern in the race for New Hampshire’s governor.

CONCORD, N.H. (AP) — Several of New Hampshire’s top races remained too close to call Wednesday morning, including a U.S. Senate race that was still suspenseful but less significant to the national political scene.

The tight race between Republican U.S. Sen. Kelly Ayotte and Democratic Gov. Maggie Hassan took top billing as one of half a dozen contests around the country that would determine which party controls the Senate next year. But Republicans officially will retain control regardless of New Hampshire’s outcome based on the results in other states.

With on clear winner emerging, both Ayotte and Hassan thanked supporters around 12:30 a.m.

‘‘We’re upbeat. We’re confident, but we want to make sure we do it the New Hampshire way and have every vote in because every vote matters,’’ Ayotte said.

‘‘There are still votes to count in a lot of small towns. We are confident we will maintain our lead when every vote is in,’’ she said.

The races have played out against the backdrop of New Hampshire’s battleground status in the presidential race — Republican nominee Donald Trump frequently returned to the state that gave him his first primary victory in February even as polls showed Democratic nominee Hillary Clinton pulling ahead. Clinton invested heavily in the state as well, sending high-profile surrogate after surrogate to New Hampshire and campaigning here herself several times after losing the first-in-the-nation primary to U.S. Sen. Bernie Sanders of Vermont.

Jason Jarvis, 41, of Swanzey, said he voted for Trump because he thinks Clinton is a criminal. He called the entire election season awful.

‘‘I think it’s been more of, ‘This is why you shouldn’t vote for this person’ and not ‘why you should vote for me,’’’ said Jarvis, an independent who paints and restores houses for a living.

Richard Hagan, a stay-at-home dad from Concord, said he voted for Clinton with his children in mind.

‘‘They’re getting older, and the world, I think, will be a little more unstable if Trump were to be president,’’ he said.

Given the stakes, the Senate race attracted attention from the start and the interest only increased as Ayotte’s complicated relationship with Trump evolved. First, she said she supported Trump but wasn’t endorsing him. In early October, she said she ‘‘absolutely’’ would tell a child to aspire to be like him but quickly took back those remarks. A few days later, she rescinded her support altogether based on newly released 2005 recordings in which Trump bragged about using his fame to force himself on women. She said she’d write in vice presidential nominee Mike Pence instead.

‘‘I think principled Republicans should’ve taken a strong stand against Trump. He’s not a Republican, and he’s not fit to hold office,’’ said Blank, 47, an environmental engineer. ‘‘I went straight-ticket Democrat this year, which I don’t usually do. I never go straight ticket on anything, but the Republican pool is polluted by Donald Trump.’’

Hassan, a two-term governor, brought up Trump frequently, arguing that Ayotte showed bad judgment in supporting him for as long as she did and put political calculations ahead of principle when she changed her position. Ayotte, a former attorney general, countered that, unlike Hassan, she has been willing to stand up to her party’s leadership. She cast herself as an independent, bipartisan senator while portraying Hassan as a rubber stamp for Democrats and a hypocrite for taking credit for a state budget she initially vetoed as governor.

Seeking to replace Hassan as governor were two men who both serve on her Executive Council, a five-member body that approves state contracts and nominations.

Sununu came out the winner, becoming the nation’s youngest governor at 42. Sununu’s father, John H. Sununu, served as governor in the 1980s.

Both Sununu and Van Ostern worked together on the governor’s Executive Council but spent much of the campaign criticizing each other’s day jobs.

The 1st Congressional District featured two familiar faces: Republican incumbent Frank Guinta was running against Democrat Carol Shea-Porter for a fourth time. She held the seat for two terms until Guinta defeated her in 2010. She beat him in 2012; he won in 2014. Independent Shawn O’Connor also was on the ballot.

Secretary of State Bill Gardner, who last week predicted a record turnout of 738,000 voters, said Tuesday night that many towns were seeing higher numbers than in 2008 and 2012 and that he believes his prediction would hold.