Over 4,000 people gathered at the Parkman Bandstand on Boston Common and marched to the State House and through the streets of Boston Wednesday night to voice their discontent for Donald Trump as the nation’s new president-elect.

Boston police said there were no arrests, and that the protest was “peaceful in nature.”

More than 4,500 people had RSVPed on Facebook to the “Boston Against Donald Trump” rally, which was scheduled to begin at 7 p.m.

Others in opposition to Republican Trump’s unexpected election victory over Democrat Hillary Clinton began protesting earlier in the day on the Common and outside the State House. Anti-Trump rallies and protests were also widespread across New England,  as well as across the country Wednesday night.

Here are scenes from the rally:

Protest against Donal Trump in the Boston Common pic.twitter.com/ZKgPrwVyFi

Over 1,000 people have gathered at Boston Common for a Boston Against Trump Rally tonight… pic.twitter.com/EdXw6dCJbG

Signs at the Trump protest in Boston:

“One day at a time”
“Hope will never be silent”
“Disarm hate”
“Nightmare in America” pic.twitter.com/zN1B6bsZCH

The crowd of Trump protesters has swelled here on the Boston Common. pic.twitter.com/lAr4tXx2iI

Thousands of people marched down the streets of Boston during anti-Trump rally that started at Boston Common https://t.co/uMVBg6HVai pic.twitter.com/j20jiGfKb2

Boston’s Rally Against Trump is marching down from Boston Commons to Copley right now pic.twitter.com/7dL4h9D70f

@OnlyInBOS anti trump rally back bay. Never seen anything like this in Boston pic.twitter.com/eENvUaOwfa

Protests going on right now on the #BostonCommon against President- Elect @realDonaldTrump pic.twitter.com/o6KQv5o6YZ 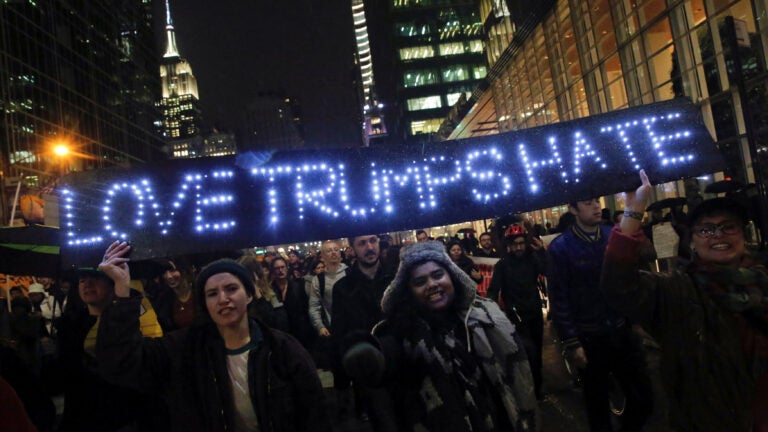 Thousands protest Trump win around US