WASHINGTON (AP) — Like boxers before a big fight, Republicans pumped themselves up with the pounding music of Survivor’s 1980s anthem “Eye of the Tiger” and Bachman-Turner Overdrive’s “Takin’ Care of Business” before passing a bill to dismantle Democrat Barack Obama’s health care law.

Hours later, when lawmakers filled the House chamber Thursday afternoon to cast the final vote, Democrats answered with another song.

“You own it now!” yelled Rep. Joe Crowley, D-N.Y., as the chant from the 1960s song spread across the Democratic side of the chamber.

Earlier in the day, Republican leaders were intent on rallying rank and file after the disaster six weeks ago when they had to abruptly pull the bill from the House floor. They had spent weeks, days and hours pressuring reluctant Republicans to back the legislation that would cut the Medicaid program for the poor, eliminate Obama’s fines for people who don’t buy insurance and provide generally skimpier subsidies.

Congressional analysts estimate that if the bill becomes law, 24 million more Americans would be uninsured by 2026, including 14 million by next year.

At a raucous, closed-door meeting early Thursday morning, there were profanity-laced pleas from some lawmakers to get behind the bill. Republicans feared that not delivering on the seven-year-old promise to repeal would anger their core supporters.

Speaker Paul Ryan, R-Wis., received cheers and a standing ovation. Arizona Rep. Martha McSally, a former fighter pilot, stood up and told her colleagues that it was time to get this “(expletive) thing done,” according to members and aides in the room.

Ryan directly addressed the stakes in a House floor speech just before the vote.

As the vote moved toward its final tally of 217-213, Republicans applauded and Democrats waved good-bye. It was reminiscent of 1993 when Republicans did the same to former Democratic Rep. Marjorie Margolies-Mezvinsky, who was the deciding vote on President Bill Clinton’s budget bill. She lost re-election the next year.

Many Democrats who voted for Obama’s Affordable Care Act in 2009 lost their seats and the majority in 2010. Republicans have been pushing to repeal it ever since, and finally have a shot with a GOP president in office.

Maryland Rep. Steny Hoyer, the No. 2 Democrat in the House, speculated after Thursday’s vote that the tables may soon turn politically.

“We think they’ve lost either way,” he said.

Republicans sniffed at the Democratic antics.

“They are not a serious party,” said New York Rep. John Faso, who was undecided on the bill until this week, when he decided to vote for it. “They believe in show and theater and spectacle and you saw that in that display they had out there.”

After the vote, Republicans boarded buses for a ride to the White House and celebratory event with President Donald Trump. Protesters serenaded them with chants of “Shame on you!” and “2018.” 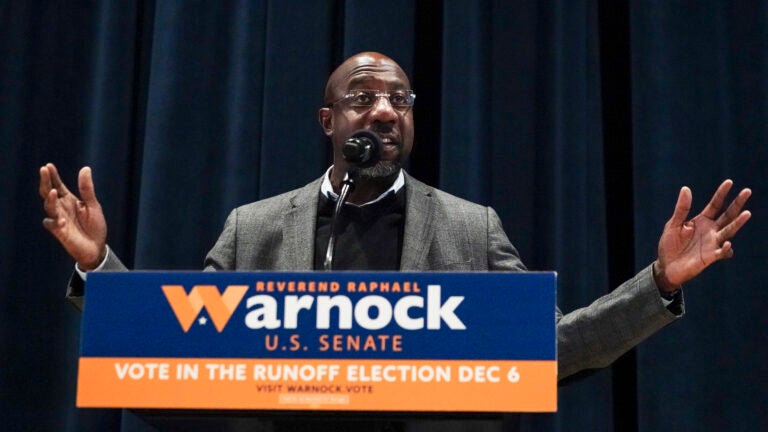