It’s a lesson learned countless times: Always remember when your microphone may be on.

Following a Senate Appropriations subcommittee hearing Tuesday, Sens. Susan Collins and Jack Reed were caught on a hot mic saying some rather unkind things about President Donald Trump, his administration, and a Texas congressman who on Monday vaguely expressed a desire to duel the Maine senator.

“I swear, [the Office of Management and Budget] just went through and whenever there was ‘grant,’ they just X it out,” Collins, the Republican chair of the subcommittee, said after the hearing ended, according to the Washington Post.

“With no measurement, no thinking about it, no metrics, no nothing,” she continued. “It’s just incredibly irresponsible.”

Reed, a Rhode Island Democrat and ranking member of the subcommittee, agreed.

“I think he’s crazy,” he said, referring to Trump. “I mean, I don’t say that lightly and as a kind of a goofy guy.”

After several more complaints about the administration’s handling of the budget, the subject turned to Rep. Blake Farenthold, a Texas Republican, who told a local radio station he would duel certain Republican “female senators from the Northeast” over their opposition to the party’s health care efforts if they were men from south Texas.

“Did you see the one who challenged me to a duel?” asked Collins.

Reed said he had and presented a theory as to why Farenthold made the comments.

“You could beat the [s—] out of him,” Reed told Collins, who laughed.

The Maine senator then went on to comment on Farenthold’s looks.

“He’s huge and he’s so… I don’t mean to be unkind, but he’s so unattractive, it’s unbelievable,” she said.

Before the mic cut out, Collins asked Reed if he had seen the 2009 photos of Farenthold in one-piece pajamas posing with a “Playboy bunny.”

Correction: The pajama’s Susan Collins mentioned that Blake Farenthold wore was for a Texas fundraiser in 2009. https://t.co/7Qho5kEoV7 pic.twitter.com/B7F6cdd8Xn

In a statement Tuesday afternoon, Collins said she had received a handwritten apology from Farenthold for his previous comments and offered her own apology in return.

“Neither weapons nor inappropriate words are the right way to resolve legislative disputes,” she said. “I received a handwritten apology from Rep. Farenthold late this morning.  I accept his apology, and I offer him mine.”

Alluding to Collins’s hot mic comment about the OMB’s “irresponsible” decisions, spokeswoman Annie Clark added that the senator was concerned about the sweeping cuts to transportation and housing programs in Trump’s proposed budget.

“Senator Collins is worried about the elimination of transportation and housing programs in the President’s budget request that are critically important to local communities across our country, such as: TIGER, CDBG, Essential Air Service, HOME as well as major reductions to FAA, Amtrak, and rental assistance, which serves predominantly older and disabled individuals,” Clark said in a statement.

Chip Unruh, a spokesman for Reed, told WPRI that the Rhode Island senator was “just letting Senator Collins know he’s in her corner.” 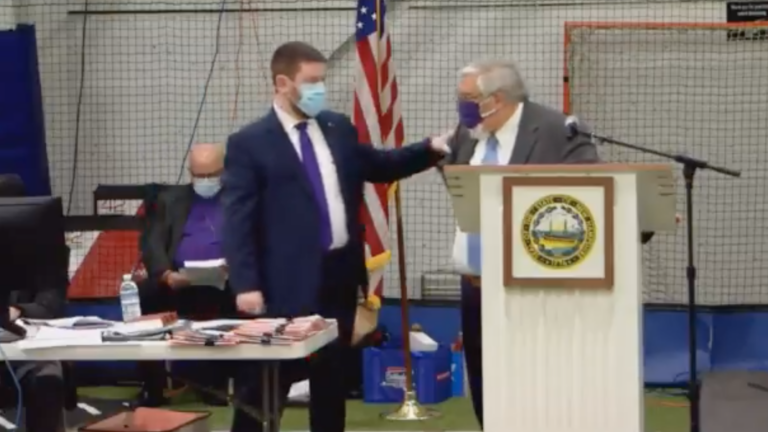