Massachusetts Rep. Seth Moulton issued a fiery challenge to Speaker of the House Paul Ryan to allow a Congressional debate on sensible gun control legislation in the wake of Sunday night’s mass shooting in Las Vegas, the deadliest in U.S. history.

Following a panel discussion at Faneuil Hall for the Forbes Under 30 Summit Monday morning, Moulton was asked by a Boston.com reporter whether he expected the Las Vegas tragedy to ignite any sort of action in Congress regarding gun control reform.

“I don’t know how many innocent Americans have to die before Republican leadership has the courage to have a debate about this,” the Salem Democrat said. “Not even to vote for it, I’m just saying to have a debate.

“You should ask Republicans that,” Moulton continued. “Ask Paul Ryan that question when you get a chance. How many more Americans need to die, Mr. Speaker, before you do your job?”

Ryan tweeted a statement Monday morning in which he said that America stands “united in our shock, our condolences, & our prayers,” and ordered that the flags over the Capitol be lowered to half-staff in memory of the shooting victims.

America woke up to heartbreaking news from Las Vegas. We stand united in our shock, our condolences, & our prayers. https://t.co/dKqjJqPIpu pic.twitter.com/B67cklsBkS

When asked about the first piece of gun control legislation he would introduce in a hypothetical Congress free of partisan gridlock, Moulton cited universal background checks.

“Nine out of 10 Americans support them,” Moulton said. “There’s a lot of evidence that shows it would reduce the chances of crimes like these. It wouldn’t entirely stop them, but it would help. We should have passed universal background checks years ago.”

Prior to taking the stage at Faneuil Hall, Moulton tweeted that he would not participate in an expected moment of silence in the House of Representatives, saying the gesture was an “excuse for inaction.”

As after #Orlando, I will NOT be joining my colleagues in a moment of silence on the House Floor that just becomes an excuse for inaction.

Now is not a moment for silence; it’s a time for action.

Moulton echoed that sentiment in a video statement he released Monday morning.

As someone who’s seen the effects of gun violence first hand at war, my heart goes out to the victims and families in Las Vegas. But now is not the time for silence – it’s a time for action.

It’s a time for us to finally come together as Americans and actually do something about this scourge of violence that uniquely affects Americans. We can protect the Second Amendment, we can protect our constitutional rights, and we can still do something about this public health crisis that is gun violence in our communities. These guns have no business in our schools, on our streets, or at concerts.

I will not be standing with my colleagues in a moment of silence that just becomes an excuse for inaction in the House of Representatives today. I will work to do something about this problem so that it doesn’t happen again. 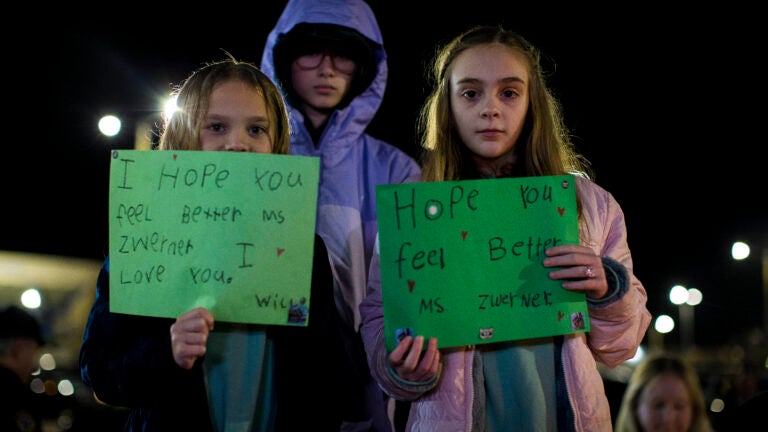