The findings, coming just over two weeks before the Nov. 7 election, show Walsh with soaring marks overall, with 69 percent of the voters saying they hold a favorable view of the mayor, 66 percent saying they are pleased with his job performance, and 59 percent stating that Boston, under Walsh, has implemented progressive policies.

Walsh is beating Jackson, 58 percent to 23 percent, with 17 percent undecided in the survey, released Sunday.

The mayor leads his opponent among voters of every race, including blacks. Jackson is the first major black candidate to reach the finals since 1983.

Remarkably, nearly half of those polled say they have personally met Walsh.

Likely voters also expressed support for Boston as a sanctuary for unauthorized immigrants, and most seemed open to using city tax incentives and other benefits to woo big corporations like Amazon to the city. Walsh has championed both issues, and Jackson also supports Boston as a sanctuary city.

While voters registered their lingering dissatisfaction over soaring housing prices and the city’s high cost of living, they nevertheless seem bent on returning the mayor to a second term, said David Paleologos, director of the Suffolk University Political Research Center, which conducted the poll with the Globe.

“Voters are not connecting their dissatisfaction with the price of housing and the cost of living in Boston with Mayor Walsh,’’ Paleologos said. “They like him. They approve of the work he is doing.’’

The poll of 500 likely city voters was conducted with live telephone interviews from Thursday through Saturday.

The results were weighted by gender, race, neighborhood, and other factors to approximate a 2017 electorate.

The poll has a margin of error of plus or minus 4.4 percentage points.

The results underline the significant hurdles that a challenger such as Jackson faces in trying to take down a powerful, well-financed incumbent in City Hall. The poll showed that Jackson has improved his name recognition but has a long way to go.

“Jackson is the right guy in the wrong race,’’ Paleologos said. “He’s popular. It’s not like he has a negative.’’

But Jackson has made some gains. Forty-six percent of the voters surveyed said they have a favorable view of the councilor, 35 percent were undecided or had not formed an opinion about him, and 32 percent said they had met Jackson.

By comparison, he was a virtual unknown to nearly half of the voters in the Suffolk University/Globe poll conducted earlier this year.

Other poll highlights include:

■ On the most pressing issues, the city’s voters expressed dissatisfaction about the price of housing (67 percent), the cost of living (61 percent), and the performance of the Boston Public Schools (37 percent).

■ Fifty-seven percent said Boston should give sanctuary to unauthorized immigrants, while 32 percent disagreed.

■ Twenty-two percent said they would purchase marijuana in Massachusetts when it becomes legal to buy in 2018, while 72 percent shunned the idea.

■ If the election were held today, voters said they would reelect incumbents in the at-large council race.

Voters will be able to select four out of eight choices on the city ballot, and those polled favored the incumbents Michelle Wu (32 percent), Ayanna Pressley (29 percent), Michael Flaherty (26 percent), and Annissa Essaibi George (18 percent).

The mayor dominated Jackson in all aspects of the new poll.

Walsh leads Jackson 64 to 21 percent among whites and 36 to 34 percent among blacks. Some blacks (26 percent) said they were undecided about the contest.

The mayor also outpolled Jackson among Hispanics (56 to 23 percent) and Asians (73 percent to 19 percent).

Only 15 percent of the respondents are Hispanics, and 7 percent are Asians. Those subsets carry a much higher margin of error, Paleologos noted.

Half of the respondents are whites, and 20 percent are blacks.

Robert J. Taylor, a South End architect and Jackson supporter, said the councilor has been attentive to constituents’ needs. He said Walsh has not done anything wrong since he has been in office, but Taylor said he is not impressed.

But Walsh’s supporters say that the mayor is on the right track.

“He has some great people in place. I think he’s a level-headed person in a very difficult landscape,’’ said Thomas Ryan, a South End resident.

“I have nothing against [Jackson]. I think he’s awesome. I just think that right now . . . change isn’t necessarily a good thing at this moment.’’ 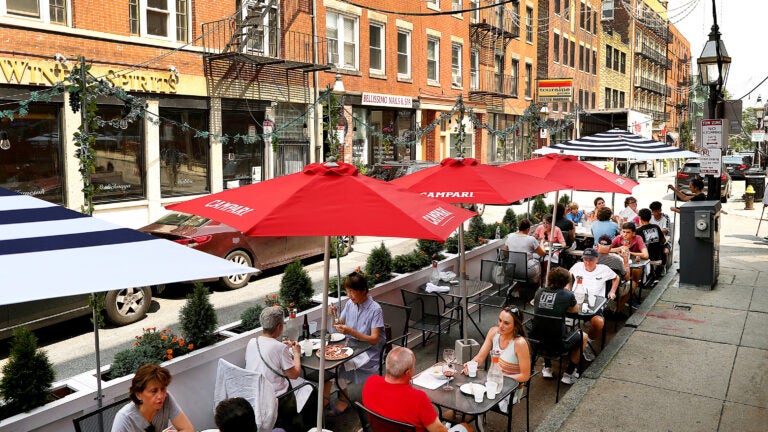 North End outdoor dining — with its new fees — is nearing its end. Where did the money go?