Anthony Scaramucci, the flashy banker who sacrificed his investment firm and his marriage to join President Donald Trump’s administration for a short yet colorful stint as communications director, is now battling students at his alma mater as if they were rival White House advisors.

Scaramucci, who graduated from Tufts University in 1986, quit a board position he held at the Medford college Tuesday amid a weeks-long fight over an article written about him in a student newspaper. Here’s how we got here.

It all started with a poll and a petition.

Carter Banker, a graduate student at the university’s Fletcher School of Law and Diplomacy, launched a student campaign last month calling for Scaramucci’s removal from his position on the international affairs school’s Board of Advisors. Scaramucci had been on the board since June 2016.

Banker told The Tufts Daily that she had previously questioned Scaramucci’s role on the 40-member board during his rocky tenure as White House communications director, but that the petition was finally prompted by a questionable poll about the Holocaust tweeted by The Scaramucci Post, his new media organization, last month. The multiple choice poll, which has since been deleted, asked: “How many Jews were killed in the Holocaust?”

The organization later tweeted that the poll was put up by another contributor without Scaramucci’s knowledge.

This poll was put up by @lancelaifer without consulting @Scaramucci who is traveling in London.
The poll has been taken down. pic.twitter.com/SKaaPZAPow

The intent of the poll was to highlight ignorance of the basic facts of the Holocaust. I take full responsibility for it.

This is @lancelaifer and I apologize if anyone was offended by the Holocaust poll.

Banker did not believe that was an acceptable excuse, writing that Scaramucci was responsible for the content of his publication.

“His ‘advice’ is not worthy of our institution, and his presence on the board could be a disincentive for new students looking to attend Fletcher and alums looking to donate to the school,” read her petition, which has now collected more than 300 signatures.

Banker’s petition was picked up in a Tufts Daily opinion piece nearly three weeks later by fellow Fletcher School student Camilo A. Caballero, who gave an even harsher critique of “The Mooch”:

However, there sits on the Board of Advisors of the Fletcher School of Law and Diplomacy at Tufts a man whose career and ideals are diametrically opposed to those ideas and who sullies the vision of the University.

This is Anthony Scaramucci, a man who began his infamously short career as the White House communications director by uttering profanity-laced comments on national news outlets, the man who sold his soul in contradiction to his own purported beliefs for a seat in that White House and a man who makes his Twitter accessible to friends interested in giving comfort to Holocaust deniers.

A man who is irresponsible, inconsistent, an unethical opportunist and who exuded the highest degree of disreputability should not be on the Fletcher Board.

Patrick Collins, a university spokesman, told the Tufts Daily that there was no precedent for removing an advisor from the board, which he said only meets two to three times a year. According to The Boston Globe, the board has no financial responsibility and simply makes suggestions to the school’s deans.

“No one advisor’s voice, regardless of the perspective it represents, determines the policies, actions, or public positions of the school or university,” Collins said in a statement.

According to Globe, Scaramucci has “long-standing ties” to Tufts beyond simply graduating from the school, including serving on other university boards, donating money, and sending his son to the university.

Following the flurry of local coverage, Scarmucci tweeted at Banker asking to be invited to campus to “have an honest exchange of ideas.”

Invite me on campus. Let’s have an honest exchange of ideas and info. Then you can draw a more informed conclusion.

Hi @Scaramucci, thanks for reaching out. What kind of exchange did you have in mind? One-on-one? Fletcher-wide discussion?

.@carterbanker thanks Carter for responding. I am happy to go in any direction that you suggest. Let me know. https://t.co/ilQSoIiGhd

Since you are going into Diplomacy, the harder part of it of course is meeting with ppl that you may disagree w/ and may not like. https://t.co/ilQSoIiGhd

Fast-forward another three-weeks, and it appeared that Scaramucci had soured on the entire idea.

As the Globe reported, Tufts postponed a scheduled session Monday with Scaramucci after he threatened to sue Caballero and The Tufts Daily unless they retracted their “false and defamatory allegations.”

According to the Globe, Scaramucci’s lawyers specifically took issue with this part of Caballero’s Nov. 6 piece:

…the man who sold his soul in contradiction to his own purported beliefs for a seat in that White House and a man who makes his Twitter accessible to friends interested in giving comfort to Holocaust deniers.

A man who is irresponsible, inconsistent, an unethical opportunist and who exuded the highest degree of disreputability should not be on the Fletcher Board.

They also took issue with Caballero’s comments in a follow-up November 13 column calling Scaramucci “unethical” and someone who “cares about gaining attention and nothing more.” During his 10-day tenure as White House communications director, Scaramucci infamously went on a expletive-laden rant about his colleagues in the Trump administration during a New Yorker interview.

Scaramucci told the Globe that he is not trying to limit students’ free speech, but was defending himself against an “attack” he said was factually inaccurate.

“Either back it up or you will hear from my lawyer,” Scaramucci reportedly wrote to Caballero in a Nov. 16 email. “You may have a difference of opinion from me politically which I respect but you can’t make spurious claims about my reputation and integrity.”

Samuel J. Lieberman, his lawyers, reportedly wrote in a Nov. 21 letter that Scaramucci was “ready to take legal action … but will refrain from litigation if you retract the false statements and issue a public apology.”

The Tufts Daily published Lieberman’s cease and desist letter in full on Monday.

However, legal experts said it would be difficult for Scaramucci to make the case that Caballero knowingly made a false statement of fact — as opposed to opinion, which is a defense against defamation.

Collins told the Globe that Monday’s scheduled event with Scaramucci, which would have addressed the petition, would be postponed until Scaramucci’s legal threats were resolved.

In an open letter posted on his website Monday night, Scaramucci defended himself against the criticism from Banker and Caballero, though he seemed to soften his tone.

Before July 2017, my name recognition within your peer group was likely very low. Your opinion of me is shaped almost entirely by the media coverage I received this summer. By aligning myself with President Trump, I made myself a target for people who are determined to malign him. But I am a more complex and, candidly, better person than you give me credit for.

Scaramucci made no mention of his legal threats, but asked the students to reconsider their petition.

“Regardless of the outcome, I am, forever, a Jumbo,” he said.

I didn’t back out of speaking at Tufts. The provost cancelled my invitation. Invite me and I will come out at anytime. https://t.co/QRAuXwvN0u

The backlash from Scaramucci notwithstanding, Banker’s petition and Caballero’s opinion pieces accomplished their stated goal. As the Tufts Daily first reported Tuesday, Scaramucci resigned from the Fletcher School’s Board of Advisors.

“This morning, Anthony Scaramucci informed The Fletcher School that he is resigning his position on the school’s Board of Advisors, effective immediately. We thank Mr. Scaramucci for his past service to Tufts and wish him well,” Fletcher School Dean James Stavridis said in a statement.

In an email to the Globe, Scaramucci said his decision to resign would make it easier for some of those who became entangled in the controversy.

“Easier for Tufts and easier for me,” he said.

In a tweet Tuesday night, however, Scaramucci responded to a user asking him to withdraw the threat of a lawsuit against Caballero by stating he “will not allow the defamatory remarks to stand without reprisal.”

“Back it up or apologize,” he added.

Suzanne thanks for your advice and wisdom. However I will not allow the defamatory remarks to stand without reprisal. I am all for free speech. Defamation is something I take seriously, so should the school and the student. https://t.co/MlMJZjGBE1 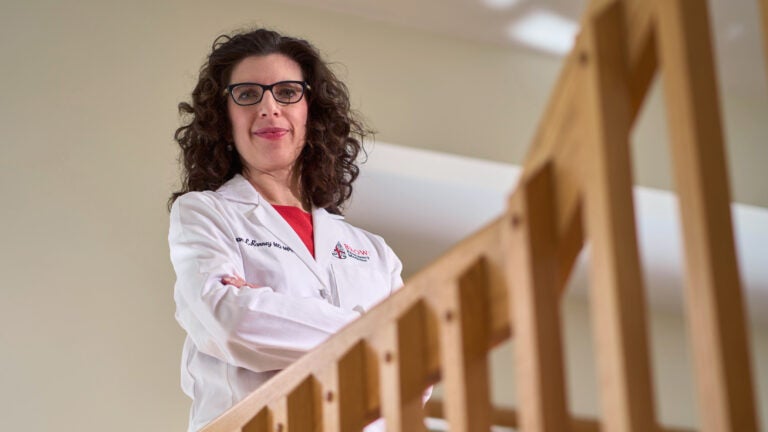