The federal indictment, brought by special counsel Robert Mueller, represents the most detailed allegations to date of illegal Russian meddling during the campaign that sent Trump to the White House. It also marks the first criminal charges against Russians believed to have secretly worked to influence the outcome.

The Russian organization was funded by Yevgeny Prigozhin, the indictment says. He is a wealthy St. Petersburg businessman with ties to the Russian government and President Vladimir Putin.

Trump quickly claimed vindication Friday, noting in a tweet that the alleged interference efforts began in 2014 — ‘‘long before I announced that I would run for President.’’

‘‘The results of the election were not impacted. The Trump campaign did nothing wrong — no collusion!’’ he tweeted.

But the indictment does not resolve the collusion question at the heart of the continuing Mueller probe, which before Friday had produced charges against four Trump associates. U.S. intelligence agencies have previously said the Russian government interfered to benefit Trump, including by orchestrating the hacking of Democratic emails, and Mueller has been assessing whether the campaign coordinated with the Kremlin.

The latest indictment does not focus on the hacking but instead centers on a social media propaganda effort that began in 2014 and continued past the election, with the goal of producing distrust in the American political process. Trump himself has been reluctant to acknowledge the interference and any role that it might have played in propelling him to the White House.

The indictment does not allege that any American knowingly participated in Russian meddling, or suggest that Trump campaign associates had more than ‘‘unwitting’’ contact with some of the defendants who posed as Americans during election season.

But it does lay out a vast and wide-ranging Russian effort to sway political opinion in the United States through a strategy that involved creating Internet postings in the names of Americans whose identities had been stolen; staging political rallies while posing as American political activists and paying people in the U.S. to promote or disparage candidates.

While foreign meddling in U.S. campaigns is not new, the indictment for an effort of this scope and digital sophistication is unprecedented.

‘‘This indictment serves as a reminder that people are not always who they appear to be on the internet,’’ Deputy Attorney General Rod Rosenstein said Friday. ‘‘The indictment alleges that the Russian conspirators want to promote discord in the United States and undermine public confidence in democracy. We must not allow them to succeed.’’

The 13 Russians are not in custody and not likely to ever face trial. The Justice Department has for years supported indicting foreign defendants in absentia as a way of publicly shaming them and effectively barring them from foreign travel.

The surreptitious campaign was organized by the Internet Research Agency, a notorious Russian troll farm that the indictment says sought to conduct ‘‘information warfare against the United States of America.’’

The company, among three Russian entities named in the indictment, had a multimillion-dollar budget and hundreds of workers divided by specialties and assigned to day and night shifts. According to prosecutors, the company was funded by companies controlled by Prigozhin, the wealthy Russian who has been dubbed ‘‘Putin’s chef’’ because his restaurants and catering businesses have hosted the Kremlin leader’s dinners with foreign dignitaries.

Prigozhin said Friday he was not upset by the indictment.

‘‘Americans are very impressionable people,’’ he was quoted as saying by Russia’s state news agency. They ‘‘see what they want to see.’’

Also Friday, Mueller announced a guilty plea from a California man who unwittingly sold bank accounts to Russians involved in the interference effort.

The election-meddling organization, looking to conceal its Russian roots, purchased space on computer servers within the U.S., used email accounts from U.S. internet service providers and created and controlled social media pages with huge numbers of followers on divisive issues such as immigration, religion and the Black Lives Matter movement.

Starting in April 2016, the indictment says, the Russian agency bought political ads on social media supporting Trump and opposing Clinton without reporting expenditures to the Federal Election Commission or registering as foreign agents. Among the ads: ‘‘JOIN our #HillaryClintonForPrison2016’’ and ‘‘Donald wants to defeat terrorism … Hillary wants to sponsor it.’’

The indictment details contacts targeting three unnamed officials in the Trump campaign’s Florida operation. In each instance, the Russians used false U.S. personas to contact the officials. The indictment doesn’t say if any of them responded, and there’s no allegation that any of the campaign officials knew they were communicating with Russians.

Two of the defendants traveled to the U.S. in June 2014 to gather intelligence on social media sites and identify targets for their operations, the indictment alleges. Following the trip, the group collected further intelligence by contacting U.S. political and social media activists while posing as U.S. citizens. They were guided by one contact to target ‘‘purple states like Colorado, Virginia and Florida,’’ prosecutors say.

‘‘They engaged in operations primarily intended to communicate derogatory information about Hillary Clinton, to denigrate other candidates such as Ted Cruz and Marco Rubio, and to support Bernie Sanders and then-candidate Donald Trump,’’ the indictment states.

Cruz and Rubio ran against Trump in the Republican primary; Sanders opposed Clinton in the Democratic primary.

According to one internal communication described by prosecutors, the specialists were instructed to ‘‘use any opportunity to criticize Hillary and the rest (except Sanders and Trump_we support them).’’ And according to one internal review, a specialist was criticized for having a low number of posts criticizing Clinton. The person was told ‘‘it is imperative to intensify criticizing Hillary Clinton’’ in future posts.

The indictment also asserts that the posts encouraged minority groups not to vote or to vote for third parties and alleged Democratic voter fraud.

Ahead of a Florida rally, the Russians paid one person to build a cage on a flatbed truck and another to wear a costume portraying Clinton in a prison uniform. But they also organized some rallies opposing Trump, including one in New York after the election called ‘‘Trump is NOT my president.’’

The Russians destroyed evidence of their activities as Mueller’s investigation picked up, with one of those indicted sending an email in September 2017 to a family member that said the FBI had ‘‘busted’’ them so they were covering their tracks.

That person, Irina Viktorovna Kaverzina, wrote the family member, ‘‘I created all of these pictures and posts, and the Americans believed that it was written by their people.’’ 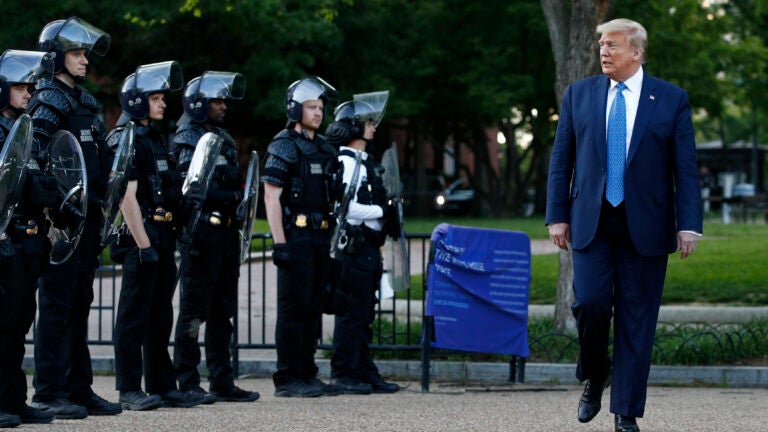