WASHINGTON (AP) — The Latest on the United States, North Korea and South Korea (all times local):

Former NBA star Dennis Rodman, who has traveled several times to North Korea and is one of the few Americans to have met its leader, is praising President Donald Trump for planning a summit with Kim Jong Un.

Rodman tells The Associated Press he looks forward to returning to the pariah nation for “basketball diplomacy” in the coming months.

He says: “Well done, President Trump. You’re on the way to a historical meeting no U.S. president has ever done.”

Rodman was speaking by phone soon after the planned summit was announced in Washington — a major surprise after a year of rising tensions over North Korea’s nuclear weapons.

The committee was not briefed ahead of the announcement.

Some members of the Senate Foreign Relations Committee are skeptical.

Republican Cory Gardner of Colorado says the “price of admission” for Trump and Kim Jong Un meeting must be “complete, verifiable, and irreversible denuclearization of the Korean peninsula.”

Democrat Ed Markey of Massachusetts says Trump should treat it “as the beginning of a long diplomatic process” — avoiding “unscripted” remarks that could derail it.

Undersecretary of State Steve Goldstein says Tillerson spoke to both Abe and Trump about the decision before it was announced publicly at the White House.

Tillerson is in Ethiopia, where the surprise announcement came in the middle of the night. Only hours before, Tillerson had said the U.S. was a “long ways from negotiations” with the North and the State Department said the U.S. was not going to schedule talks “at this point.”

But Goldstein says Tillerson is “a very careful speaker. He knew exactly what he was saying today.”

Goldstein says the meeting “shows that the maximum pressure campaign is working.”

President Donald Trump says “Great progress” is being made, but sanctions on North Korea will remain in place as he prepares for what would be the first-ever meeting between the two countries’ leaders.

Trump is on Twitter after South Koreans broke the news that North Korean leader Kim Jong Un wanted to meet with him. Trump says Kim “talked about denuclearization with the South Korean Representatives, not just a freeze.”

He also says North Korea has agreed to stop testing missiles. The messages were conveyed by a South Korean delegation that visited the White House Thursday.

He told reporters in Tokyo on Friday morning that he had spoken with Trump on the phone, and they had agreed to continue putting maximum pressure on North Korea until it takes concrete steps toward giving up its nuclear weapons program.

Abe says there is no change in that position.

His remarks came after Trump agreed to meet with North Korean leader Kim Jung Un by May to negotiate an end to its nuclear weapons program.

The White House says President Donald Trump’s meeting with North Korean leader Kim Jong Un will be held “at a place and time to be determined.”

She adds that the U.S. looks “forward to the denuclearization of North Korea,” but says all sanctions will remain in place in the meantime.

Trump had wanted the statement to come from the White House press room, but aides moved it outside the West Wing, enabling a foreign official to break the historic news.

White House aides say they were unable to immediately provide additional information because they were not involved in the decision, which was entirely Trump’s.

The South Korean national security adviser made the roughly 2-minute announcement after nightfall near the entrance to the West Wing.

Chung Eui-yong spoke outside the White House after a day of briefings with senior U.S. officials, including Trump, on the recent inter-Korea talks. Chung says Trump said “he would meet Kim Jong Un by May to achieve permanent denuclearization” of the Korean peninsula.

Chung says Kim told the South Koreans he is “committed to denuclearization” and pledged that “North Korea will refrain from any further nuclear or missile tests.”

The meeting would be the first of its kind between a leader of North Korea and a sitting president of the United States. The two countries have been in a formal state of war since the Korean War in the 1950s.

President Donald Trump says an upcoming announcement about North Korea is “almost beyond” talks between Washington and Pyongyang.

Trump announced earlier that South Korea will be making a “major statement” about North Korea at 7 p.m. Eastern time Thursday.

An ABC News producer tweets that ABC reporter Jon Karl asked Trump privately if the statement will be about talks between the U.S. and North Korea. Trump responded: “It’s almost beyond that. Hopefully, you will give me credit.”

Trump teased the announcement in the White House press briefing room. It comes after hours of consultations at the White House between U.S. and South Korean officials over recent inter-Korean talks.

President Donald Trump made a surprise appearance in the White House briefing room to announce that South Korea would be making a “major statement” about North Korea at 7 p.m. Eastern time.

North Korea has invited the U.S. to reopen direct talks, saying it would suspend its nuclear tests during such talks.

Trump hasn’t said whether he’d agree to those conditions, but has credited himself for the recent flurry of action.

Trump teased the announcement in his first visit to the White House press briefing room. It comes after hours of consultations at the White House between U.S. and South Korean officials over recent inter-Korean talks.

That dialogue in North Korea concluded with an invitation to the U.S. to reopen direct talks with Pyongyang, saying it would suspend its nuclear tests during such talks. Trump has expressed openness to the invitation, saying, “We’ll see.”

South Korean officials were briefing the White House Thursday on the outcome of their pathfinding meeting with North Korean leader Kim Jong Un.

Seoul has already publicized that North Korea offered talks with the United States on denuclearization and normalizing ties, a potential diplomatic opening after a year of escalating tensions over the North’s nuclear and missile tests. The rival Koreas also agreed to hold a leadership summit in late April.

Top Trump administration officials were getting a chance to hear firsthand from South Korean national security director, Chung Eui-yong, who led the delegation that went to Pyongyang. 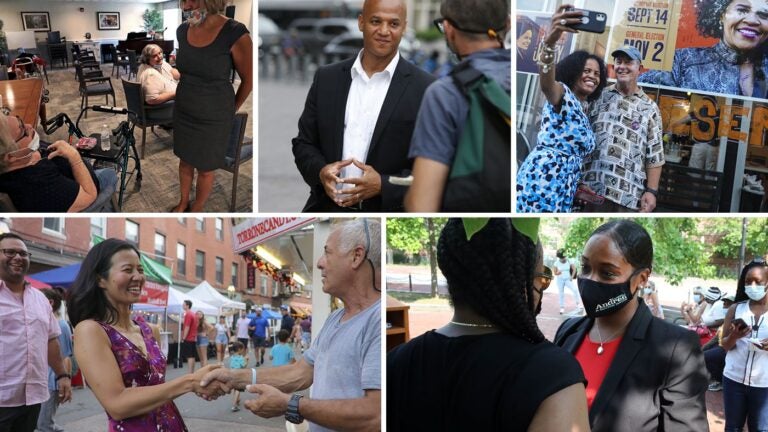 Most Boston.com readers are voting for this mayoral candidate