WASHINGTON (AP) — The Supreme Court is not noted for its speed or adaptability, but it moved very quickly to post a link to an audio recording of arguments over President Donald Trump’s travel ban.

Less than an hour after the justices left the bench Wednesday, the public was able to listen to the courtroom action in the high-profile case.

The fast turnaround raises two questions: Why not just provide live audio of the proceedings? At the very least, why not do same-day release more often?

One answer is that the justices may believe that allowing prompt and frequent audio release will be another step down the slippery slope toward cameras in the courtroom. Most of the justices are on record as opposing televised sessions.

The court has said there is no logistical obstacle to an audio livestream. Audio has occasionally been made available on the day of arguments since December 2000, when the court heard the Bush v. Gore case that helped settle the presidential election.

But in recent years, Chief Justice John Roberts has turned down almost every request for it. The previous time before Wednesday that he agreed was the gay marriage arguments in 2015.

Instead, the court has chosen to provide audio of arguments at the end of the week in which they take place.

Prominent Supreme Court advocate Kannon Shanmugam suggested on Twitter that the court try same-day audio for a one-year trial period. That would bring the high court in line with every other federal appellate court in the country, according to the court transparency group Fix the Court.

Josh Blackman, a constitutional law professor who comments frequently on the travel ban, was almost giddy after Wednesday’s arguments, but not because of what he heard in the courtroom.

Blackman was showing off his pocket-size copy of the Constitution, with the fresh signature of Lin-Manuel Miranda. Yes, the man who created the hit musical “Hamilton” and played the title character on Broadway was among those on hand for the arguments.

Miranda tweeted after Wednesday’s arguments that he was honored to “be in the room where it happened,” playing on the title of one of the show’s songs. Miranda has previously spoken out against the ban and in support of the American Civil Liberties Union, one of the groups that challenged it.

Actually, Alexander Hamilton had a lot to say about the judicial branch of government. In one of a series of essays known as the Federalist Papers, Hamilton wrote that the judiciary was the weakest of the three branches of government. “The complete independence of the courts of justice is peculiarly essential in a limited Constitution,” he wrote in Federalist 78.

With no more arguments scheduled until October, the justices now can focus on churning out opinions in the 39 cases they have heard, but not yet decided.

Among the outstanding cases are close to a dozen big ones, including the travel ban dispute that was argued on Wednesday. The justices will almost certainly finish up by the end of June, then not meet again until a private conference in late September.

—Whether a baker can invoke a religious objection and refuse to make a cake for a same-sex couple in Colorado.

—New Jersey’s challenge to a federal law that prohibits states from allowing gambling on sporting events.

—Three cases about redistricting, including calls for the court to impose limits on drawing political boundaries for partisan gain.

—A fight over state laws that compel government workers to pay fees to labor unions that represent them in collective bargaining, even if the workers don’t want to be union members.

—State laws that allow people to be removed from the voting rolls because they haven’t voted recently.

The oldest undecided case comes from the term’s first day, a high-stakes fight about whether employers can prevent workers from banding together to complain about workplace conditions. 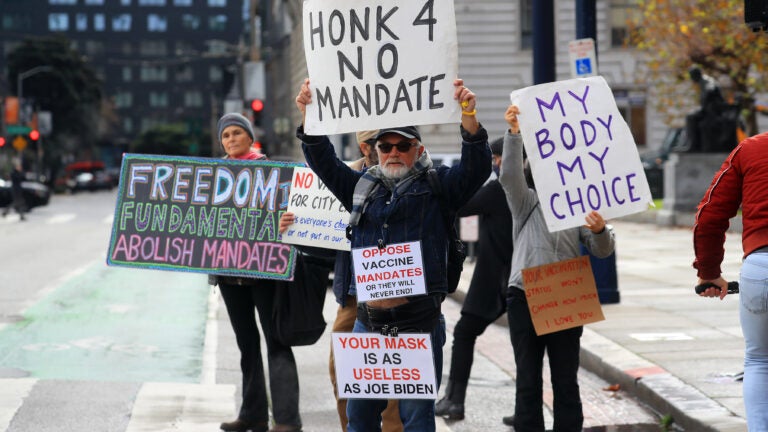