WASHINGTON (AP) — The Latest on the visit of Nigerian President Muhammadu Buhari to Washington (all times local):

President Donald Trump says he and Nigerian President Muhammadu Buhari (moo-HAH’-mah-doo boo-HAH’-ree) did not discuss his reported use of a vulgarity in describing African countries earlier this year.

Answering a reporter’s question Monday, Trump said he and Buhari did not talk about reports that he used a term for a filthy toilet when telling U.S. lawmakers that he wanted less immigration from certain countries in Africa and more from places like Norway.

Trump said Monday that there are “some countries that are in very bad shape and very tough places to live in.”

Buhari deflected, saying he was unsure about “whether that allegation against the president was true or not.”

Trump adds that he and Buhari didn’t discuss it “because the president knows me and he knows where I’m coming from.”

President Donald Trump is refusing to apologize for his inflammatory rhetoric on immigration even if it impacts the legal fortune of his travel ban.

The president said Monday, while at a White House news conference alongside President Muhammadu Buhari of Nigeria, that he had nothing for which to apologize.

He also said he did not believe it would make any difference. The latest iteration of his travel ban is currently being considered by the Supreme Court.

Trump also said his administration was monitoring the progress of a caravan of migrants making its way north through Latin America toward the United States.

He declined to say how many of the migrants should be admitted to the U.S. but bemoaned the nation’s immigration laws as “the worst.”

Nigeria is one of America’s largest trading partners in the region. Trump says the U.S. is having conversations with Nigeria about removing trade barriers.

Trump says the U.S. will invest “substantially” in Nigeria if Buhari can create a level playing field.

He commented at a joint White House news conference with Buhari after they met Monday at the White House.

President Donald Trump is urging Nigeria to take down trade barriers to allow additional U.S. investment in the African nation.

Trump is discussing trade ties at the start of a joint news conference with Nigerian President Muhammadu Buhari (moo-HAH’-mah-doo boo-HAH’-ree).

Trump notes that the U.S. provides Nigeria with more than $1 billion a year in foreign aid and wants Nigeria to take down trade barriers in return.

Trump says, “We think that we are owed that.”

He says the U.S. will invest in Nigeria if they can make a more “level playing field” on trade.

President Donald Trump says the extremist group Boko Haram has been a “terrible problem” for Nigeria.

Trump commented Monday as he sat down in the Oval Office with Nigerian President Muhammadu Buhari (moo-HAH’-mah-doo boo-HAH’-ree).

Trump says they will discuss terrorism and trade. He also mentioned anti-Christian sentiment in Nigeria.

Buhari thanked the U.S. for its commitment to fighting terrorism and says U.S. action has helped his country a lot.

Boko Haram launched a violent insurgency in the Nigerian northeast nine years ago with the aim of creating an Islamic state. Thousands of people have been killed. Mass abductions of schoolgirls brought Boko Haram international notoriety and one faction has declared allegiance to the Islamic State group.

Security and economic issues top the agenda for the one-on-one meeting and working lunch Monday. They also plan a joint news conference.

The Nigerian president’s visit follows an uncomfortable start to the Trump administration’s approach to the world’s second most populous continent.

Trump caused anger in Nigeria last year after reports that he said Nigerians wouldn’t want to return to their “huts” if allowed to visit the U.S.

Nigeria was also among the African nations that summoned the U.S. ambassador to explain Trump’s comments comparing Africa to a filthy toilet.

Buhari was among the first two African leaders Trump called after taking office, along with South Africa’s president. 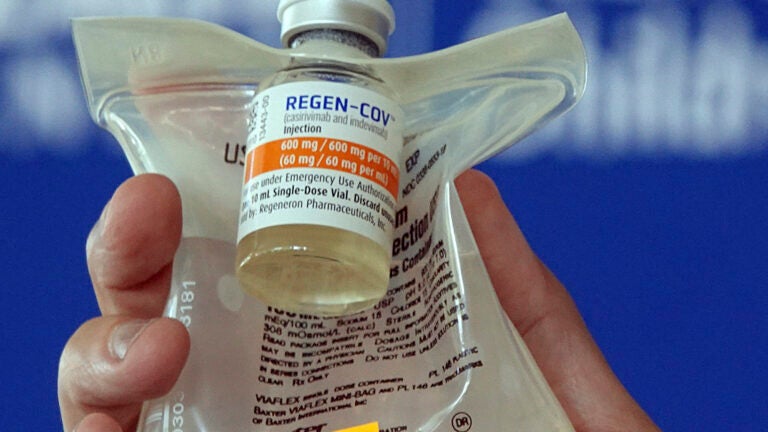 FDA halts use of antibody drugs that don't work vs. omicron