WASHINGTON (AP) — John McCain is not signing off quietly.

As in so much of the senator’s extraordinary life, the rebellious Republican is facing this challenging chapter — battling brain cancer — in his own rule-breaking way, stirring up old fights and starting new ones. Rarely has the sickbed been so lively.

If this is Washington’s long goodbye to a sometimes favorite son, it’s also a reemergence of old resentments and political fault lines that continue to split the nation.

Perhaps no one should have expected anything less from the 81-year-old senator, who can be crotchety and cantankerous but is also seen by many, both in and out of politics, as an American hero, flaws and all.

Former Vice President Joe Biden said Friday as McCain “fights for his life, he deserves better — so much better.”

“Our children learn from our example,” Biden said. “The lingering question is: Whose example will it be? I am certain it will be John’s.”

Said House Speaker Paul Ryan, “His legacy is so long that John McCain is a hero to us all.”

McCain was diagnosed in July with glioblastoma, an aggressive brain cancer. He left Washington in December and few expect him to return. Up-and-down reports of his health shift every few days.

A steady stream of visitors have stopped by the McCain family ranch in Arizona — including Michael Bloomberg, the former mayor of New York, on Friday.

Graham said he told McCain he will leave behind a long list of Republicans — and Democrats — he has mentored, Graham included.

“Your legacy is the people you affected,” Graham said he told his friend. “John McCain’s going to have a hell of a legacy.”

Not everyone, though, is so keen to listen to McCain these days.

Most Republican senators are not heeding his advice to reject Haspel, who was chief of base of a detention site where terror suspects were waterboarded. McCain lived through years of captivity during the Vietnam War.

Trump has suggested reviving the now-banned brutal interrogation techniques. And Cheney, who was an architect of the post-Sept. 11, 2001, strategy, said he would keep the program active and ready for deployment, and doesn’t think it amounted to torture.

“People want to go back and try to rewrite history, but if it were my call, I’d do it again,” Cheney told Fox Business.

One retired Air Force general, Tom McInerney, called McCain “songbird John” on the same station this week for allegedly providing information to the North Vietnamese while he was a prisoner of war. McCain has said he gave inaccurate information after being tortured. Fox said McInerney would not be invited back on its business or news channels.

In explaining his opposition, Paul said, “We shouldn’t reward somebody who participated in torture, really still has trouble saying and articulating that it’s an immoral thing.”

After McCain’s recent hospitalization for an intestinal infection, Graham said he was worried about his old friend’s health. But after seeing him this week, he decided McCain will “be with us for a while.”

The two weren’t quite yet saying their goodbyes. In fact, “there’s not talk of funerals, there’s talk of the future,” Graham said.

They watched a classic Western, “The Man Who Shot Liberty Valance” — with McCain narrating along the way in words that cannot be repeated — and talked about McCain’s book, which Graham says couldn’t have come at a better time. “I told him it should be required reading,” he said.

It’s a story about the country, and “even though we make our share of mistakes, we’re always trying to make it a more perfect union,” Graham said. 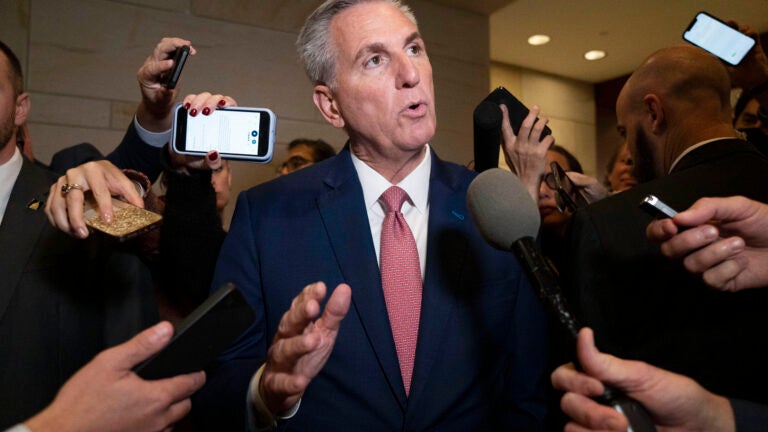