WASHINGTON (AP) — Another interest rate increase is all but certain when the Federal Reserve meets this week. What’s not so sure is whether the vigorous U.S. economy will lead the Fed to accelerate its rate hikes in the months ahead — a move that could raise the risk of a recession.

When it last met in May, the Fed left its short-term rate unchanged. But it noted that inflation was edging near its 2 percent target after years of remaining undesirably low. Should inflation eventually pick up, the Fed might move to tighten credit more aggressively. The challenge would be to do so without slowing growth so much as to cause a downturn.

Investors are eagerly awaiting the updated economic forecasts the Fed will issue when its meeting ends Wednesday. Among other things, the forecasts will show whether the policymakers still foresee a total of three rate increases for 2018, as they predicted three months ago, or whether they now envision four. The Fed has so far raised its key rate once this year, in March.

A gradual rise in inflation is coinciding with newfound economic strength. After years in which the economy expanded at roughly a tepid 2 percent annually, growth could top 3 percent this year. Consumer and business spending is powering the economy, in part a result of the tax cut President Donald Trump pushed through Congress late last year.

With employers hiring at a solid pace month after month, unemployment has reached 3.8 percent. Not since 1969 has the jobless rate been lower.

The Fed will probably note the economy’s strength in the statement it will issue Wednesday. Further clarity could follow, when Chairman Jerome Powell holds his second news conference since succeeding Janet Yellen in February.

Beginning in 2008 in the midst of the financial crisis, the Fed kept its key rate unchanged at a record low near zero for seven years. It then raised rates once in 2015, once in 2016 and three times in 2017. Wednesday’s expected quarter-point rate increase will raise the Fed’s benchmark rate to a range of 1.75 percent to 2 percent.

Mark Zandi, chief economist at Moody’s Analytics, said he thinks stronger growth and rising inflation will lead the Fed to raise rates four times this year and four more in 2019.

“We are going to get a period of rip-roaring growth that is going to push unemployment down to close to 3 percent, a level we have only been at twice in our history,” Zandi said. “That means the Fed is going to have to start stepping harder on the brakes.”

The Fed aims to achieve its mandates of maximizing employment and stabilizing prices by lowering rates to spur growth during times of economic weakness and raising rates to slow growth if the economy threatens to overheat. When the Fed tightens credit, it aims to do so without derailing the economy. But if it miscalculates and overdoes the credit tightening, it can trigger a recession.

The economic expansion has survived for nine years and is now the second-longest in history. It will become the longest if it lasts past June 2019, at which point it would surpass the expansion that lasted from March 1991 to March 2001.

While many economists think the current expansion will exceed the 1990’s streak, some worry about what might occur once the impact of the tax cuts begin to fade and the Fed’s gradual rate hikes begin to curb growth. Diane Swonk, chief economist at Grant Thornton, suggested that the economy could experience a “growth recession,” in which the gross domestic product slows so much that unemployment starts to rise.

In the meantime, some Fed watchers are revising their forecasts to predict four rather than three rate increases this year. Even so, the CME Group says trading in the futures market still suggests a slight majority envisioning three increases for 2018.

The Fed’s pace of rate hikes for the rest of the year could end up reflecting a tug of war between a sturdy economy and the risks to growth, including from a potential trade war that could break out between the United States and such key trading partners as China, the European Union, Canada and Mexico. All those countries have vowed to retaliate against any U.S. tariffs with their own penalties against U.S. goods.

A global trade war would risk cutting into U.S. economic growth by depressing American export sales and raising inflation by making consumers and businesses pay more for imports and for goods made with imported materials like lumber, steel and aluminum.

“The trade situation is one of the biggest risks facing the economy,” said Brian Bethune, an economics professor at Tufts University. “The tariffs will likely drive inflation higher and will also make businesses more cautious about making investment decisions. The Fed has to be worried about how this policy uncertainty could affect the economy.”

Bethune said he wouldn’t be surprised if Fed officials accelerated their pace of rate increases to four this year before slowing to only two in 2019, to give them time to assess the economic effects of their rate increases and of the global trade conflict. 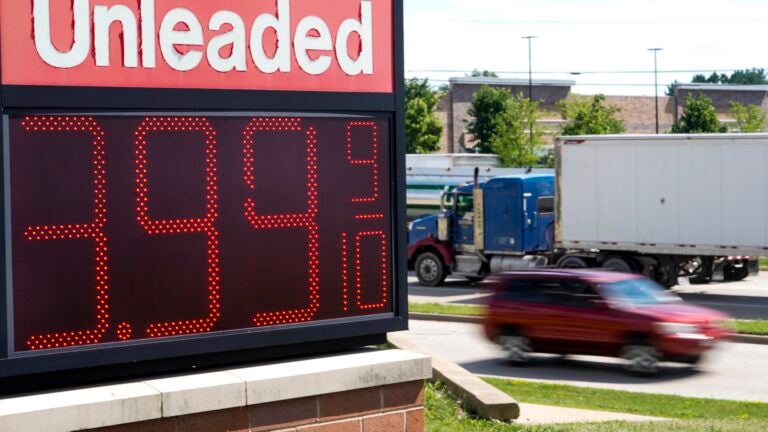 Explainer: Why gas prices are falling