BIDDEFORD, Maine — What do Australia, the Oscars and the state of Maine have in common?

Not much, except a somewhat esoteric method of voting. The Oscars and Australia — and Ireland and several U.S. cities — have used this method, called ranked choice voting, for years.

Maine is trying it for the first time Tuesday, becoming the first U.S. state in modern times to use it statewide in multiple races, including to pick party nominees for governor.

Maine’s primary is being watched closely, more for its use of ranked choice voting than for who wins. Voters will also decide a contentious ballot question — whether to use ranked choice voting in the future — even before anyone knows how things will have worked out on Tuesday. The vote could be a turning point in efforts to revamp how Americans conduct elections.

“If it passes, it will be huge,” said Richard Winger, editor and publisher of Ballot Access News, which tracks election issues nationwide and supports ranked choice voting.

“A hundred years ago, a few Southern states used it, but it died out,” he said. North Carolina used it statewide in a single low-profile judicial election in 2010, but no other state has ventured down this path.

“Now, if it takes root in Maine,” he said, “I think it will spread around the country.” Democrats in Maine will have seven candidates for governor to rank on their primary ballots Tuesday; Republicans will have four.

A candidate most people can tolerate

Ranked choice voting, sometimes called preferential voting or instant runoff voting, is used in races with at least three candidates. Instead of picking just one person to vote for, voters rank the candidates in order of preference. If no candidate wins a majority of first-choice votes, the candidate with the fewest is eliminated, and the ballots cast for that person are redistributed to the other candidates based on those voters’ second choices. The process repeats until someone wins a majority.

It sounds more complicated than it is, at least for voters, who simply have to rank their favorites.

At least a dozen cities use ranked choice voting for municipal elections now, including Cambridge, Massachusetts; Minneapolis, Portland, Maine; and San Francisco, which gave the nation a tutorial last week as it elected a new mayor. Several Southern states use it for military and overseas voters who vote absentee, to spare those voters having to mail in multiple ballots when a runoff is needed to decide a race. And in at least 19 states, bills have been introduced to advance the method.

The whole idea is to elect a candidate whom a majority of voters can live with. As of now, most places in the United States go by plurality, choosing the candidate who is, in election lingo, “first past the post,” even if that person does not have majority support. 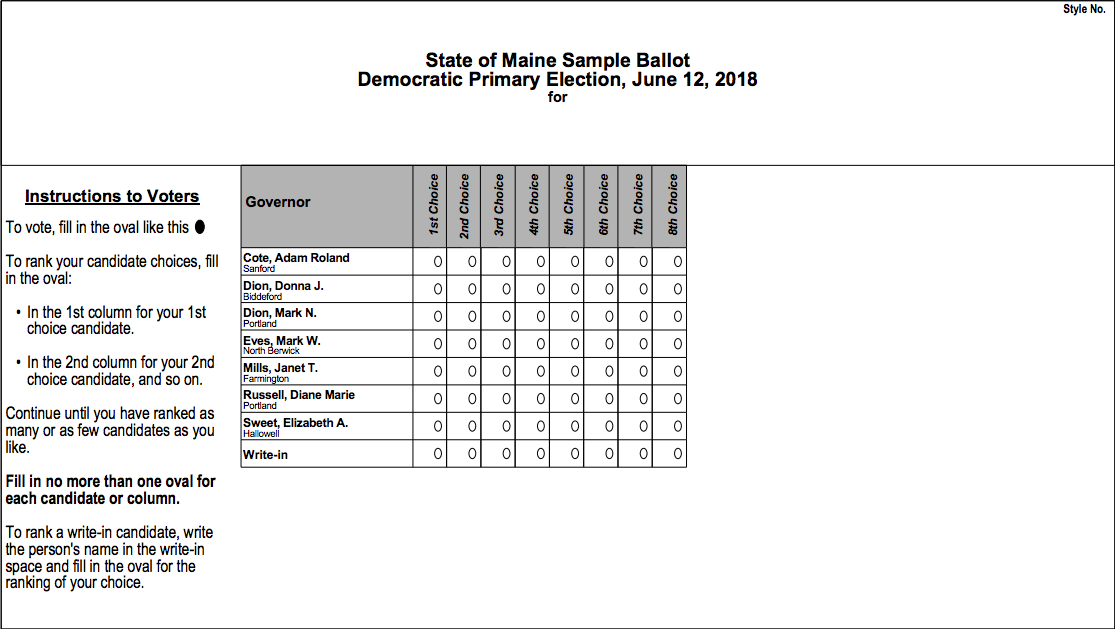 A sample ballot showing Maine voters how to vote by ranking their choices.

The Oscars and Australia

In Australia, which began using ranked choice voting a century ago, the method has encouraged moments of unexpected cooperation. More powerful parties or candidates, for example, often incorporate policies of weaker ones in order to attract second-choice votes from those parties’ supporters.

One oddity in Australia is that voting is mandatory — or at least, showing up to the polls is mandatory. You can drop a blank ballot into the box if you want, but if you don’t show up at all, you can be fined.

For the Oscars, no one has to show up anywhere, since voting is done entirely by mail. But what members of the Academy of Motion Picture Arts and Sciences like most about ranked choice voting is that it generally prevents a really unpopular movie from being named best picture.

“If you do it by plurality, you could have a winner with just 11 percent of the vote,” said Ric Robertson, who was chief operating officer for the academy in 2009 when it reinstituted ranked choice voting for the Oscar for best picture.

Robertson, now a consultant to the entertainment industry, said that some members of the academy still don’t understand how the votes are tabulated, but all of them know how to mark their ballots. And by the way, that big flub last year, when the wrong movie was announced as best picture, had nothing to do with ranked choice voting; it was an old-fashioned envelope mix-up.

A partisan split in Maine

Even without this new method of voting, the primaries for governor in Maine promised to be chaotic, with seven Democrats and four Republicans competing for nominations. But ranked choice voting has cranked up the tumult.

The system is not usually perceived as giving an advantage to any particular party. But in Maine, Democrats generally support it and Republicans generally oppose it. 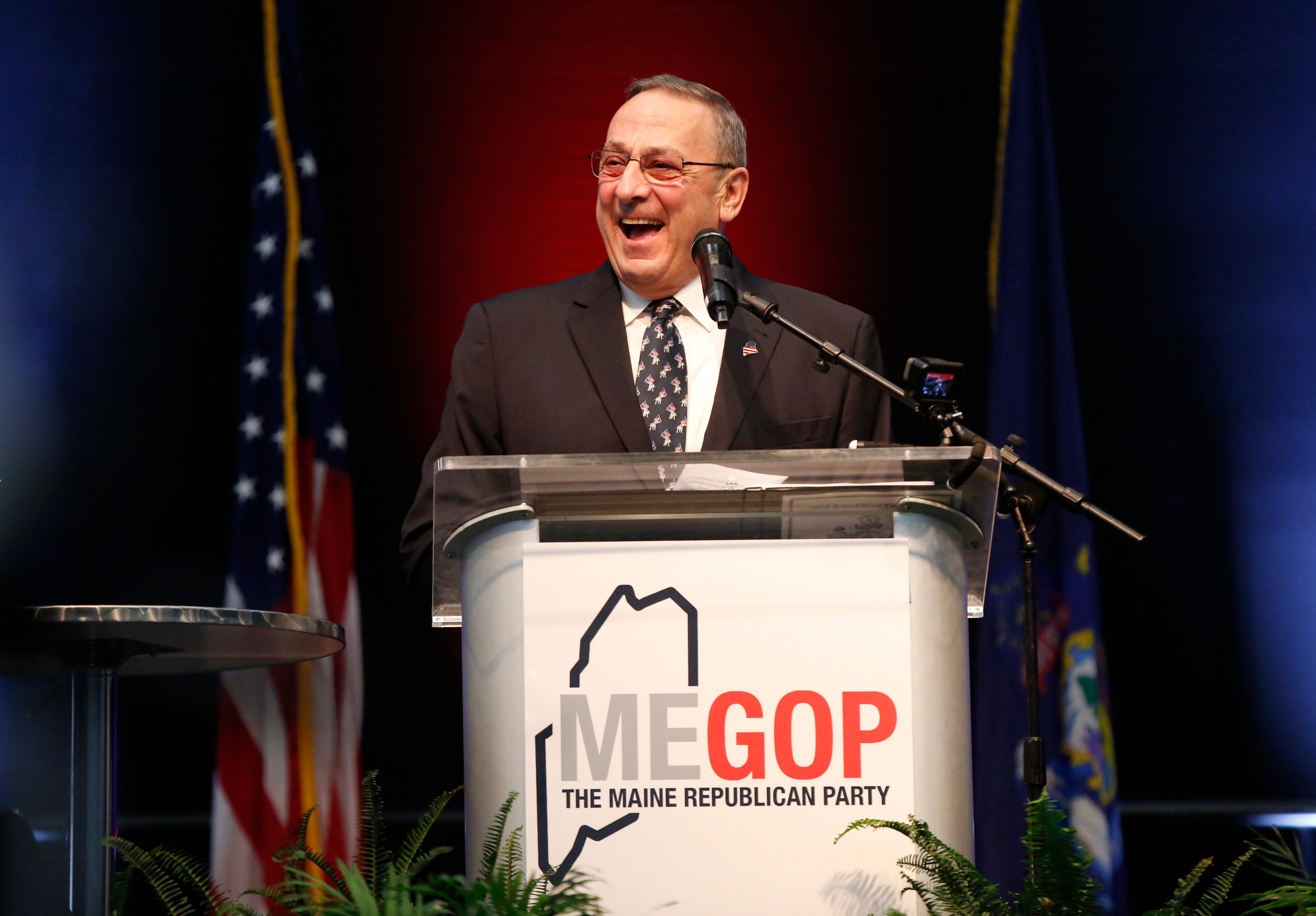 Gov. Paul LePage speaking at the state Republican convention in May. He and many of his supporters oppose ranked choice voting.

The split stems from Democratic antipathy toward the governor, Paul LePage, a Republican, whose crude and racially charged comments have roiled the state. LePage, who is barred by term limits from seeking re-election, was elected twice with less than 50 percent of the vote (38 percent in 2010 and 48 percent in 2014).

This is not uncommon in Maine, where independents are often on the ballot and where nine of the last 11 governors were elected with less than 50 percent. But LePage’s pugnacious personality spurred support for a referendum in 2016 to switch to a method that required the winner to obtain a majority.

“Ranked choice voting quickly became a litmus test of loyalty to LePage,” said Rob Richie, president of FairVote, a nonpartisan group that backs ranked choice voting. “We work with Republicans in a bunch of states, and I’ve never seen another ideological reaction to the mechanics of this.”

Local politics aside, there are pros and cons to ranked choice voting. Pros: It ensures that the winner has received a majority; it eliminates the “spoiler” effect; it discourages negative campaigning. Cons: It makes voters do more homework; it can require new voting equipment, raising costs; some studies find that low-income and minority voters participate at a lower rate.

‘Common sense’ or an ‘absolute scam’?

Using ranked choice voting for the first time and simultaneously deciding whether to keep it has made for a head-spinning campaign season in Maine.

“I think I see how it goes functionally,” said Dan Dearborn, 82, a retired insurance executive who lives in Biddeford, a coastal town in southern Maine. He was attending one of several packed meetings that Matthew Dunlap, the Maine secretary of state, held to address voter concerns.

“But I’m not sure if it’s going to work overall,” Dearborn said.

Voters are sorting through an avalanche of ads for 11 candidates for governor and mounds of material for and against ranked choice voting.

Surprising faces have popped up.

“Hi guys, it’s Jen Lawrence,” the 27-year-old Oscar-winning actress tells Maine voters in a video ad urging them to approve ranked choice voting and injecting the debate with a dose of Hollywood glamour.

Lawrence, who is taking a year off from acting to fight political corruption, calls ranked choice voting “a simple, fair, common-sense style of voting.”

The state’s Republican Party, though, calls it a “sloppy, complicated and unworkable nightmare.” The party predicts widespread confusion and disarray on Tuesday and hopes that voters who, despite having approved ranked choice voting two years ago, will pull the plug on it now.

“It’s an absolute scam and will suppress voter turnout,” said Mary Mayhew, a Republican candidate for governor. “The fact that the secretary of state is out conducting tutorials on how to vote should tell you everything you need to know.”

Democrats have taken a different tack. Two of the seven Democratic rivals are even campaigning together. In a friendly joint video, Mark Eves and Betsy Sweet note that they are competitors, but agree on most issues. “You can vote for me first and Betsy second,” Eves says, with Sweet adding, “Or me first and him second.”

Dunlap is bracing for Tuesday. Each town will report the first choice totals that night, but in the event that a contest has no majority winner, municipalities have three days to send paper ballots or electronic memory devices to the capital, Augusta. There, state officials will tabulate the ranked choice votes, beginning Friday.

He said he expected to release unofficial results after each counting round until someone in each race has a majority, but final results would probably not be known for a week.