Marijuana may now be legal in Massachusetts, but driving under its influence is still strictly prohibited.

Some states that years ago legalized the drug for recreational use, such as Colorado and Washington, have seen increases in auto fatalities involving marijuana-impaired drivers, but the problem and data are complex.

With retail stores able to open in July, Massachusetts regulators are grappling with how to prevent — and crack down on — high drivers, which isn’t as simple as it may seem.

What does Massachusetts law say about driving and marijuana, now that it’s legal in the state?

Driving while under the influence of marijuana is illegal and remains punishable under the same state laws against getting behind the wheel after drinking alcohol or taking other drugs. The 2016 voter-approved law to legalize weed did nothing to change that. According to the Centers of Disease Control, the substance can slow reaction time and decision making, and it impairs coordination and perception.

Like alcohol, it’s also illegal to have an “open container” of marijuana or marijuana-infused products, like edibles, in the passenger area of a car that’s on the road or any place where the public has access. According to the law, an “open container” means any package that has had its seal broken or “from which the contents have been partially removed or consumed.”

The penalty for violators is a fine of up to $500.

Individuals are allowed to have open containers of marijuana in their car as long as they’re stored in the trunk, a locked glove compartment, or a part of the car “not normally occupied by the driver or passenger.”

How do police detect marijuana-impaired drivers?

Police go about trying to catch high drivers the same way they look for cues of drunk or otherwise impaired drivers. Examples include weaving or straddling lanes, driving at inconsistent or even particularly slow speeds, and other abnormal or erratic driving patterns. In that sense, Carmichael again says it isn’t so different.

“We’re not really changing what we do already,” he said.

Where things differ comes after someone gets pulled over.

“There is no equivalent of a breathalyzer for marijuana,” Matt Allen, the field director for the ACLU Massachusetts, told Boston.com. “Without such a test, the best way to measure if someone should not be driving due to recent marijuana use may be a roadside impairment examination that tests reflexes, balance, and cognition.”

Massachusetts has two special training courses for police officers for identifying drug-impaired drivers. The first is a two-day course called Advanced Roadside Impaired Driving Enforcement, or ARIDE, which Carmichael says they’re hoping to ramp up as dispensaries begin opening. The second is a two-week Drug Recognition Expert program, in which officers are certified in the ability to field-test for drug-impaired drivers (and differentiate them from people with “medical and/or mental disorders”).

But in the absence of a reliable test for marijuana impairment, Carmichael says the panel should explore the possibility of compelling suspected impaired drivers of submitting to a drug recognition expert, which they can currently refuse.

Massachusetts is one of just five states that does not have a “implied consent” law for drug-impaired driving. Drivers in the state, by nature of their license, implicitly consent to submit to a breathalyzer if suspected of drunk driving.

“If you refuse that test, you automatically lose that driver’s license,” Carmichael said.

However, there’s no law that requires drivers suspected of driving while high to submit to any such test. Carmichael says he would like the impaired-driving panel to recommend expanding the implied consent law for the drug recognition expert, so drivers would have to agree to be evaluated or lose their license. Why is it so difficult?

Testing for the influence of marijuana is an imperfect science, and even roadside assessments are legally inconclusive.

Whereas a blood alcohol content of 0.08 percent or higher is accepted as the threshold for a DUI charge, blood tests for marijuana aren’t as reliable a measure of physical impairment. Cannabinoids are metabolized differently depending on the individual and the way it was ingested. As a result, the idea of blood tests for marijuana is “flawed,” according to Matt Allen, who is also on the commission’s impaired driving panel.

“Because marijuana metabolites can remain in the blood for weeks after use, there is no evidence that this is an accurate way to measure impairment,” said Allen.

For example, a first-time user could register a low amount of tetrahydrocannabinol (THC) in their system but still be too impaired to drive, while a heavy user could be unfairly arrested for lingering metabolites, even when they’re not under the influence of the drug.

Additionally, the Massachusetts Supreme Judicial Court unanimously ruled that police officers could not cite their roadside observations to conclude in court that a driver was under the influence of marijuana.

“Because the effects of marijuana may vary greatly from one individual to another, and those effects are as yet not commonly known, neither a police officer nor a lay witness who has not been qualified as an expert may offer an opinion as to whether a driver was under the influence of marijuana,” the court wrote in its decision.

According to Carmichael, officers can still share their observations about a driver’s behavior or demeanor in court, but they can’t make any affirmative “pass” or “fail” declarations.

“They just can’t go up there and say this person failed this test,” he said.

Importantly, even if the ability to convict marijuana-impaired drivers may be limited, nothing is stopping law-enforcement officers from taking away the keys of a driver they think is dangerous.

“Our first priority is getting people off the road,” Carmichael said.

But as with most roadside policing efforts, the ACLU also has concerns about whether they would be equitably enforced. The group put out a report in 2016 that found black people in Massachusetts were three times more likely than whites to be arrested for marijuana possession, despite similar usage rates.

Separate studies have previously found that black drivers in the state are also disproportionately pulled over compared with white drivers. Allen says the ACLU is supporting two bills in the state legislature that would require local police departments to collect and share data on traffic stops, including the driver’s race, “as a step towards ending racial profiling.”

“One of the goals of the adult use marijuana law is to reduce or eliminate racial disparities in enforcement, so we need to make sure that recommendations from the OUI Commission don’t reverse this progress,” Allen said. Steve Hoffman, the chairman of the Cannabis Control Commission, speaks with the media last September.

What is the commission’s special panel doing?

With licensed recreational marijuana shops on the horizon, Massachusetts officials are bracing for the possibility of more high drivers on the roads, simply based on what other states have seen.

“We do expect an increase,” Carmichael said.

That doesn’t mean they’re not also trying to prevent it. As part of legislation passed last year to amend the 2016 voter-approved marijuana legalization law, Massachusetts lawmakers directed the commission to convene a “Special Commission on Operating Under the Influence and Impaired Driving.”

The panel includes a broad range of public safety, law enforcement, civil rights, transportation, and health experts. The law requires them to conduct a comprehensive study on drug-impaired driving regulations and then submit a report with recommendations, if any, to the legislature by January 2019. The group met for the first time in mid June.

The panel will primarily study and review the ability of law enforcement to “properly test impaired operators and prevent impaired operation of motor vehicles,” including scientific, medical, and technological types of testing, as well as the impact on drivers’ rights.

The commission plans to meet again on July 3 and is considering holding regular, possibly bimonthly, meetings. Both Allen and Carmichael noted that their work is just getting started, but they did agree on one particular key point.

“The big thing is going to be prevention and educating the public [about not driving while high],” Carmichael said.

To a certain degree, Massachusetts has already taken a page from likes of Colorado on that front. Last August, the state began rolling out anti-impaired driving commercials featuring comically high people fumbling basic chores and tasks, one of which was identical to a commercial released by the Colorado Department of Transportation in 2014.

There are a lot of things you can do when you’re high, but driving isn’t one of them. #DriveSober pic.twitter.com/2HZWvadtA5

According to Allen, intervention by law enforcement may not be the most effective way to crack down on impaired driving.

“Public service announcements, education, prevention, and increasing the availability of substance abuse treatment should all be part of the effort to decrease hazards from motorists impaired by marijuana or any other drug,” he said. 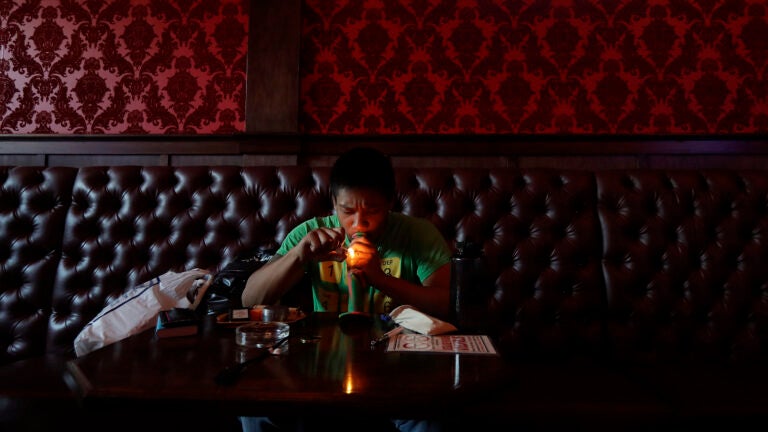 When will cannabis cafes open in Massachusetts and what will they look like?