Could the next shock to the Democratic political establishment come in Massachusetts?

Fresh off her unexpected primary upset over 10-term New York Rep. Joe Crowley, Alexandria Ocasio-Cortez called on the Bay State to deliver another surprise this September.

“Vote her in next, Massachusetts,” Ocasio-Cortez wrote in a tweet early Wednesday morning, which quoted Boston City Councilor Ayanna Pressley.

Vote her in next, Massachusetts.

We need to elect a corporate PAC-free caucus if we’re going to get things done. https://t.co/M2tF5cedTs

In an interview with CNN later Wednesday morning, the 28-year-old Democratic Socialist again mentioned Pressley, as another “exciting” national candidate working to broaden the Democratic Party’s voter base.

Pressley, who became the first woman of color ever elected to the Boston City Council in 2009, has launched her own insurgent primary challenge in Massachusetts, taking on longtime Rep. Michael Capuano in the state’s 7th Congressional District.

She was quick to congratulate Ocasio-Cortez on her win Tuesday night.

“This is about more than one campaign or election,” Pressley tweeted. “This is a movement. Together, we will change the world.”

A huge congrats to @Ocasio2018 for your victory tonight! You proved that when we stand up for what we believe in, we win. This is about more than one campaign or election. This is a movement. Together, we will change the world. Congratulations! #ChangeCantWait #Ocasio2018 pic.twitter.com/imORpc1jST

The nature of the 44-year-old city councilor’s campaign — a woman of color taking on a white, male longtime congressman in a Democratic primary — drew immediate comparisons Wednesday. The similarities and ties don’t end there, though there are some key differences.

Both Ocasio-Cortez and Pressley attended Boston University, though the latter dropped out for financial reasons. They both also worked for local senators (Ocasio-Cortez for the late Sen. Ted Kennedy during college; Pressley for former Sen. John Kerry). However, Ocasio-Cortez is a relative newcomer to electoral politics — in fact, she was working as a bartender less than a year ago — while Pressley’s career working in both front-facing and behind-the-scenes political jobs spans more than 18 years.

Both candidates are challenging their opponents in the Democratic primary from the left when it comes to policy.

Ocasio-Cortez, a member of the Democratic Socialists of America and former organizer for Sen. Bernie Sanders’ presidential campaign, ran on a Medicare-for-All health insurance system, paid family and sick leave, a federal jobs guarantee, tuition-free public universities, investment in renewable energy, and the abolishment of the Immigration and Customs Enforcement agency, also known as ICE.

Pressley, who supported Hillary Clinton in the 2016 Democratic presidential primary, has somewhat struggled to differentiate her policy platform from that of Capuano, who is substantially more liberal than Crowley. Particularly on pressing local issues like affordable housing and transportation, the two progressives have appeared to agree, though Pressley has argued she would bring a new “lens” to Washington, D.C.

That said, she also supports Medicare-for-All and debt-free college (which is slightly different than tuition-free). Notably, Pressley also just recently called for ICE to be abolished.

Ocasio-Cortez was able to take her respective progressive message and beat Crowley, an establishment-backed political titan in the Queens district he represented since 1999.

Meanwhile in Massachusetts, Pressley faces an uphill battle in the 7th District, the state’s only minority-majority district, which encompasses most of Boston and several suburbs. Capuano (who coincidentally also joined Congress in 1999) has received his own recent raft of high-profile endorsements, including from Rep. John Lewis, the civil rights legend; former Massachusetts Gov. Deval Patrick; and Boston Mayor Marty Walsh.

However, Ocasio-Cortez and Pressley have bonded over “taking down political machines that don’t service their communities.” According to Politico, Pressley even recently sent campaign staff to New York to help with Ocasio-Cortez’s get-out-the-vote effort.

Last night I had the honor of meeting @AyannaPressley and our BFF applications are already in ?‍♀️

Ayanna and I are running similar races: neither taking corporate money, both expanding the electorate & taking down political machines that don’t service their communities. pic.twitter.com/gcKUxKmx3s

“Last night I had the honor of meeting @AyannaPressley and our BFF applications are already in,” Ocasio-Cortez tweeted after the two candidates appeared together at an event in New York earlier this month.

A WBUR poll this past February showed Capuano with a 12-percentage-point edge in the race, shortly after Pressley announced her campaign. And the incumbent congressman’s campaign has more than triple the amount of cash on hand that Pressley has, according to the most recent campaign finance reports.

The dynamics of the two respective races may not be exact parallels. But if Osacio-Cortez, who won despite being vastly outspent, has shown us anything, it’s to not underestimate anyone this election year. 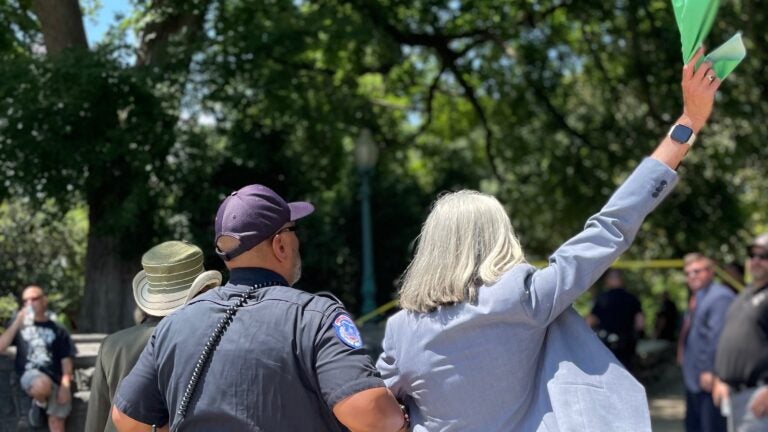