President Donald Trump celebrated active-duty service members and veterans during a military tribute on the eve of Independence Day.

The president spoke Tuesday during a “Salute to Service” charity dinner at the Greenbrier resort in White Sulphur Springs, West Virginia. He praised “Americans of every generation” who have served in the armed forces.

The event was held in conjunction with the PGA Tour’s Greenbrier Classic, which has been rechristened as “A Military Tribute at The Greenbrier.” The venerable resort is owned by the state’s Republican governor, presidential ally Jim Justice.

Highlighting his efforts to boost spending for the military, Trump said, “As the golfers can tell you, the stronger we get, the less likely it is that we will have to use it.”

President Donald Trump is defending U.S. Immigration and Customs Enforcement during an appearance at a “Salute to Service” charity dinner in West Virginia.

Trump is responding to calls from some Democrats to abolish the agency charged with detaining and deporting unauthorized immigrants.

Trump is also praising ICE agents as tough people who are sent in to confront “nests of MS-13” gang members.

Trump says, “it’s like you’re liberating a town” and, “Sometimes they have to go in swinging.”

Trump is speaking at the Greenbrier resort in White Sulphur Springs at an event honoring active-duty service members and veterans.

The dinner is being held in conjunction with a golf tournament previously known as the PGA Tour’s Greenbrier Classic.

President Donald Trump heads to West Virginia on Tuesday to express appreciation to active-duty service members and veterans during a military tribute.

The event will mark Trump’s latest appearance in a state he won by more than 40 percentage points in 2016 and where Democratic Sen. Joe Manchin is seeking re-election.

Trump has criticized Manchin for voting against tax cuts Trump enacted last year. Manchin is among Democrats with whom Trump recently discussed the vacancy on the Supreme Court. 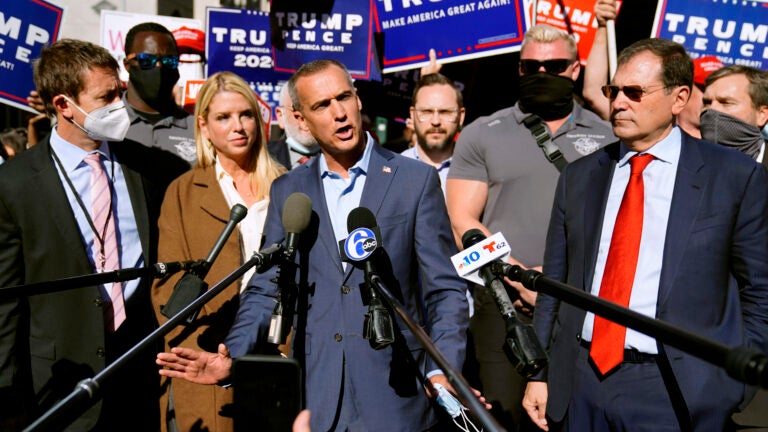