Pena Nieto said in a statement he called for “a permanent alternative that prioritizes the well-being and rights of minors.”

Pompeo visited Mexico with Cabinet-level officials to meet with both Pena Nieto and president-elect Andres Manuel Lopez Obrador after a sea-change election that could offer a chance for the neighbors to repair strained relations.

Discussions were expected to address ways to combat transnational criminal organizations, the U.S. opioid epidemic and trade tensions. But irregular migration across Mexico’s northern border into the United States loomed large during the meetings.

“The United States is committed to making measurable progress to ensure security on both sides of that border,” Pompeo told journalists.

U.S.-Mexico ties have deteriorated significantly under President Donald Trump, who campaigned on building a border wall and has repeatedly blamed Mexico for economic and social problems in the United States.

Dozens of protesters jeered at Pompeo’s motorcade as the delegation arrived to congratulate the leftist, populist Lopez Obrador.

Many of the protesters condemned the Trump administration’s “zero tolerance” immigration policy that separated families attempting to claim asylum in the United States. The vast majority of child migrants separated at the border were Central Americans, not Mexicans.

“Where are our children?” read one sign. Others read, “Stop Trump” and “ICE is a terrorist” — referring to the U.S. Immigration and Customs Enforcement agency.

Pompeo acknowledged strains in U.S.-Mexico relations when he greeted Lopez Obrador, but pledged the Trump administration values the bilateral ties.

Sharing a nearly 2,000-mile (3,200-kilometer) border, Mexico and the United States have traditionally coordinated closely on security and immigration. Mexico is also the United States’ third-largest trading partner for goods, with the U.S. buying about 80 percent of Mexico’s exports, including automobiles, fruit, vegetables and beer.

Marcelo Ebrard, who is slated to be the next Mexican top diplomat, described the meeting between Pompeo and the president-elect as “frank, respectful and cordial.” They shared with the U.S. delegation proposals for cooperation in commerce, development, security and migration.

But Ebrard said they did not discuss one idea that a Mexican official says has been debated to address irregular migration: declaring Mexico a “safe third country.” That would mean people traveling through Mexico hoping to claim asylum in the U.S. would have to do so in Mexico instead.

Such a proposal is unlikely to garner support in Mexico as it would burden the country with tens of thousands more asylum seekers a year, according to the official who spoke on condition of anonymity because he was not authorized to brief the media.

Relations have also been strained by tit-for-tat trade tariffs between Mexico and the U.S. amid tense negotiations over the North American Free Trade Agreement, or NAFTA, and fears of a trade war. Trump has branded the free trade pact, which also includes Canada, as a job killer for Americans.

In his statement, Pena Nieto emphasized his government’s willingness to continue renegotiating NAFTA to reach a deal “as quickly as possible.”

Despite positive statements from both sides, the upcoming transition of power in Mexico has the potential to further destabilize U.S.-Mexico relations if either leader takes aim at the other to appeal to his political base at home. They’re unlikely partners, as they occupy opposite ends of the political spectrum.

Lopez Obrador has already announced his government will cancel a pending purchase of U.S. helicopters as an example of cost-cutting measures. The sale was initially promoted by Washington as a move that would help a strategic partner fight against criminal organizations.

And November midterm elections in the U.S. bring the possibility that Trump could return to the rhetoric of his presidential campaign, which was derogatory toward Mexico. 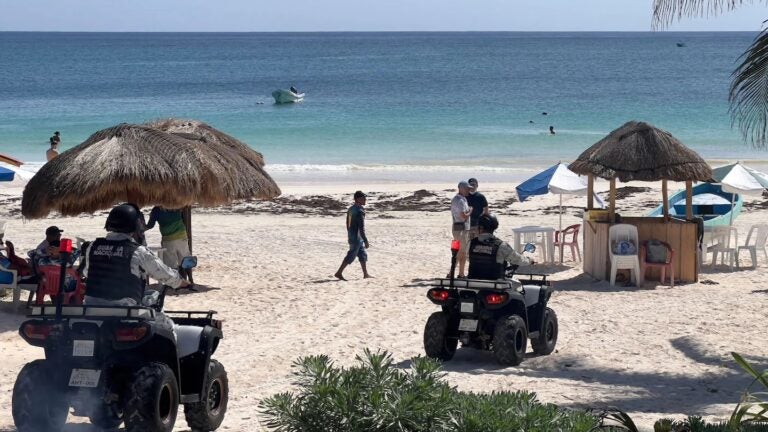 After shootings in tourist-heavy areas of Mexico, here’s what to know if you’re planning a trip