Days after he said he would boycott Samuel Adams beer, Somerville Mayor Joseph Curtatone is not alone in his criticism of Boston Beer Co. founder Jim Koch’s expressed gratitude for tax cuts under the Trump administration.

But his decision to no longer drink the beer has been met with its own critics, including fellow Democrat, Boston Mayor Marty Walsh.

“I think that if you start talking about boycotting something against elected officials, including the president, there’s not much stuff we’d be able to buy in the country,” Walsh told the Boston Herald Tuesday.

Walsh also said he didn’t know the particular details of Koch’s Aug. 7 meeting with President Donald Trump, adding he was unsure “whether he was a supporter of the president or if it was just dinner,” according to the newspaper.

Koch was one of 13 corporate executives who met with Trump at the president’s Bedminster, New Jersey, golf resort where he thanked Trump for tax breaks that Koch said help American breweries compete against foreign companies in the U.S. market, according to a White House transcript.

A Boston Beer Co. spokesperson could not be reached for comment Wednesday morning.

Curtatone, in a series of Tweets Sunday, wrote he would never drink Sam Adams again and that “We need to hold these complicit profiteers of Trump’s white nationalist agenda accountable!” He also questioned Koch if he expressed concern to Trump over immigration policies that separated families at the border.

He doubled down on his message Tuesday in another tweet against the critics of his decision.

“Got some people insisting they’re going to make Sam Adams their beer of choice now because of something I tweeted,” he wrote. “No, they won’t.”

Got some people insisting they’re going to make Sam Adams their beer of choice now because of something I tweeted. No, they won’t.

Curtatone’s response received over 1,000 replies, including from opponents who questioned why he would boycott a business in his own state and others who said his words only solidified their decision to crack open a Sam Adams beer.

“They’ll be onto their new outrage soon enough and back to drinking whatever it is they drank before this,” Curtatone wrote to one supporter. “Yet there will be those who’ve been Sammy drinkers who will remember Jim Koch sucked up to Trump.”

I made a lot of bots really angry.

Exactly. They’ll be onto their new outrage soon enough and back to drinking whatever it is they drank before this. Yet there will be those who’ve been Sammy drinkers who will remember Jim Koch sucked up to Trump.

But Curtatone’s criticism of Koch has not gone unmatched.

Jeremy Phillips and his son, Julian Kennedy, of Jamaica Plain, have a message for the Boston Beer Co., quite literally in its own backyard.

The pair, whose Jess Street house is visible from the Samuel Adams brewery parking lot, hung up a homemade banner on the side of their house Sunday that reads, “SHAME! SAM ADAMS [heart] TRUMP SHAME!,” according to The Boston Globe.

After the sign went up, Phillips said he was approached by a Boston Beer Co. manager who told him Koch attended the meeting to support craft brewers, the newspaper reports.

Phillips, who said he was not inspired to display the sign because of Curtatone’s words, said he told the manager he thinks Koch’s statements are “a tacit endorsement of this administration and its policies.”

He said he will not drink Samuel Adams beer until Koch apologizes, and added he wants to see Koch direct any tax cut profits to groups and organizations focused on helping people hurt by Trump administration policies, according to the Globe. 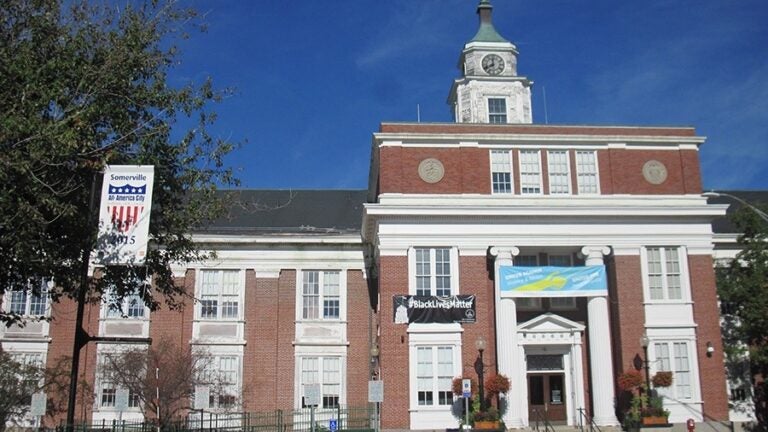 After 18 years, Somerville is electing a new mayor — and the choices are distinctly different