Massachusetts is set to send its first woman of color to Congress.

Before a crowd of supporters chanting “Change can’t wait!” at a union hall in Dorchester, Pressley said her campaign had succeeded in doing something that “Massachusetts Democrats aren’t supposed to do”: Challenge an established — if also staunchly progressive — incumbent.

“It seems like change is on the way,” she said. “I am so humbled to be standing before you tonight, victorious.”

In her victory speech, Pressley called for a “bold, uncompromising, and unafraid” approach to governing in the face of the policies and rhetoric of Republican President Donald Trump, who she called a “racist, misogynist, truly empathy-bankrupt man.”

“It’s not just good enough to see the Democrats back in power, but it matters who those Democrats are,” she said.

Before the Associated Press and other news outlets called the race Tuesday night, Capuano conceded the election to Pressley in front of a crowd of supporters at a hotel in his hometown of Somerville as voting results began making the final outcome increasingly clear.

“Obviously this is not the side we wanted to be on,” the 66-year-old congressman said in a brief speech to supporters, adding that, “clearly the district wanted a lot of change,” referring to two longtime state representatives in Boston who were also defeated by progressive challengers.

“Ayanna Pressley is going to be a good congresswoman, and I will tell you that Massachusetts will be well-served,” Capuano said.

Pressley’s campaign garnered national attention amid a summer of progressive challengers taking on — and sometimes defeating — Democratic incumbents. However, the 7th District race wasn’t drawn along ideological fault lines. Since being elected in 1994, Capuano has had one of the most progressive records in Congress, and the race opened few significant rifts over policy. In her victory speech, Pressley applauded Capuano as someone who was “unapologetically himself” and a longtime ally of progressive causes.

“The decision to challenge him was not an easy one,” she said.

However, Pressley, who was Capuano’s first primary challenger since he took office, argued that leadership wasn’t just about one’s voting record. As she said often on the campaign trail, the Chicago native repeated Tuesday night that “the people closest to the pain should be closest to the power.” Pressley called for an “equity agenda” centering around public health, reducing violence, transportation, housing, and advocacy for women. She also called for “Medicare-for-all” health insurance and the defunding of ICE — the latter of which she said was “irrevocably broken agency” and was one of the biggest disagreements in the campaign.

On Tuesday night, Pressley said that the conditions that made the 7th District — the state’s only majority nonwhite district, which runs from Milton through most of Boston and up to Chelsea, Everett, Randolph, Somerville, and part of Cambridge — one of the most unequal in the country were “cemented through policies long before [Trump] ever descended the escalator at Trump Tower.”

“Some of those policies were put in place with Democrats in the White House and in control of our Congress,” she said. “Policies that have become so engrained in our daily lives as to almost convince ourselves that there wasn’t anything we could do about it.”

“But as we now know, change can’t wait,” she added, calling Tuesday “but just the first step.”

Capuano received the endorsements of the majority of his peers in the state’s congressional delegation, though a few, including Sen. Elizabeth Warren, stayed neutral. Warren thanked Capuano for his decades of public service Tuesday night and said she was looking forward to working with Pressley in Washington, D.C.

“Ayanna [and] I have worked together for years, [and] she’s a fierce advocate [and] powerful force for change,” wrote the senator. “I’m looking forward to fighting alongside her in Congress.”

Congrats to my friend @AyannaPressley & her team on a hard-fought primary win tonight! Ayanna & I have worked together for years, & she’s a fierce advocate & powerful force for change. I’m looking forward to fighting alongside her in Congress. #mapoli

My friend @mikecapuano is a tireless champion for families, an advocate for working people, & above all a dedicated public servant. Mike, thank you for your decades of service to the people of Massachusetts. #mapoli

“Let’s push together to make Medicare for All, tuition free college, [and] living wages a reality in America – all without corporate PAC money,” Ocasio-Cortez wrote.

This photo was taken months ago.

.@AyannaPressley + I bonded over running while constantly told it’s “not our turn,” that we “weren’t ready,” “good enough,” or “experienced” enough.

In June, I won my primary. Tonight, she won hers.

Attorney General Maura Healey, the most prominent elected official in the state to back Pressley, tweeted a photo from the city councilor’s victory party simply captioned: “Herstory!”

Visit Does my mask protect me if nobody else is wearing one? 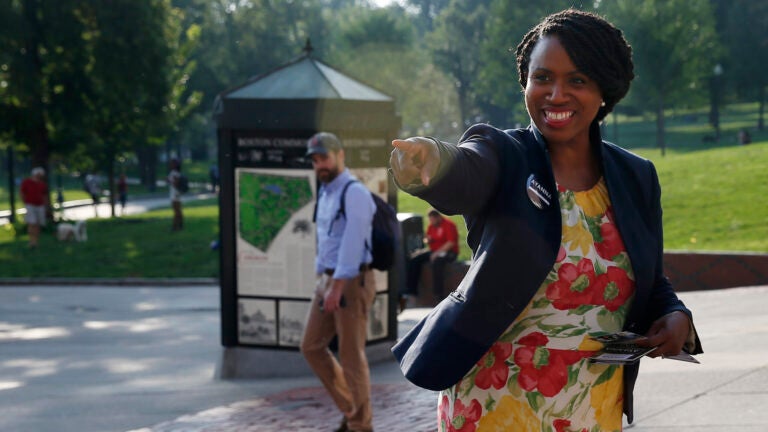 Everything you need to know about Ayanna Pressley