“Saturday Night Live’’ didn’t hold back on knocking the confirmation of Brett Kavanaugh to the Supreme Court in this weekend’s show.

The new episode’s opening envisioned GOP senators celebrating in a locker room setting (at one point set against the backdrop of the controversial song “Blurred Lines’’), with “SNL’’ cast members portraying Mitch McConnell, Jeff Flake, and Lindsey Graham, among others.

Maine Senator Susan Collins — as played by Cecily Strong — then appears, telling a CNN reporter, “The last thing I wanted was to make this about me. That’s why I told everyone to tune in at 3 p.m., so I could tell all my female supporters, ‘Psych!’’’ She continued: “Now we’re going to party like its 2020, once Susan Rice takes my seat.’’

The “Weekend Update’’ segment of the show also gave an unbridled critique of Kavanaugh’s confirmation, comparing the FBI investigation into allegations of sexual assault to a 5-second clip of “Law and Order: Special Victims Unit.’’

“Here’s what a ‘Law and Order episode based on this investigation would look like,’’ co-host Colin Jost said, before a clip aired of Mariska Hargitay telling a suspect: “We found your fingerprint on a handle of the cabinet underneath the kitchen sink.’’ The suspect replied, “I have no idea what you’re talking about,’’ and the clip promptly cut to Hargitay responding, “Well, you’re free to go.’’

Co-host Michael Che also rhetorically asked why female Republicans voted for Kavanaugh, wondering aloud, “So are you all like, hostages?’’

The show also addressed the unplanned speech Kanye West gave on last weekend’s “SNL’’ episode, in which the rapper professed his support for President Trump.

Cast member Pete Davidson made an appearance on the segment to speak about West’s political tirade, saying Che — who is black — was discussed as being the person to address West’s comments, but that Davidson was ultimately picked because he was “crazy’’ — “and we both know which side of Kanye is at the wheel right now.’’

“What Kanye said after he went off the air last week was one of the worst, most awkward things I’ve seen here, and I’ve seen Chevy Chase speak to an intern,’’ Davidson said.

He then pointed out that “SNL’’ actors had to stand behind West during the rapper’s speech, and a clip showed many cast members visibly stunned or uncomfortable — or, in Davidson’s case, with his head completely down.

“I’m like, ‘I want a career!’ — so I leave,’’ Davidson said, as the clip showed him exiting off the side of the stage.

“You know how wrong you have to be about politics for me to notice?’’ Davidson continued, saying that West was a genius — but only when it came to music. “Being mentally ill is not an excuse to act like a jackass.’’

The show also poked fun at the “presidential alerts’’ sent to millions of Americans on Wednesday, imagining messages President Trump would want to disseminate, including, “Failing New York Times Says I Cheated On Taxes. Duh! It’s called being smart!’’ and “Puerto Rico is fine now! I guess the paper towels worked!’’

Politics aside, host Awkwafina also had a standout moment during her monologue. The “Crazy Rich Asians’’ actress became serious and appeared a bit choked up as she spoke about how much it meant to see Lucy Liu host “SNL’’ almost two decades ago.

“I remember how important that episode was for me and how it totally changed what I thought was possible for an Asian-American woman,’’ she said. “Standing here tonight is a dream that I thought would never come true.’’ 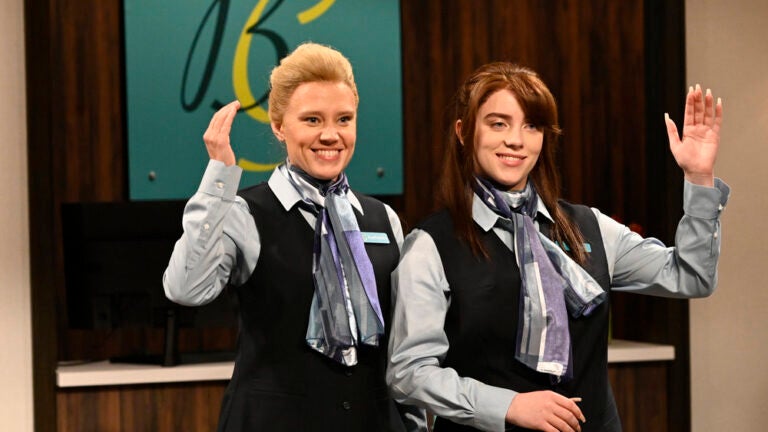