Question 1 is shaping up to be the most expensive and closely watched ballot measure this year in Massachusetts.

The proposed law, which would limit the number of patients assigned to nurses, has split nurses and sparked unified opposition from hospitals. Polls show that voters also appear to be split on the debate. And with both sides pouring millions of dollars into their respective efforts, the attention on Question 1 is poised to get more intense as campaign season heads into its final month.

Here’s a guide to untangling the nuanced debate.

What exactly would the proposal do?

If passed, Question 1 would establish ratios limiting the number of patients that could be assigned at a time to individual nurses at Massachusetts hospitals and health clinics.

For most hospital departments, the maximum ratio would be set at four patients per nurse. However, that limit would vary depending on the unit, as well as the condition and type of patient within those units. Here’s the list, via the Secretary of State’s website:

The proposed law, which would apply to all licensed hospitals in the state, also mandates that facilities are not allowed to reduce the number of nurses on staff in order to comply with the restrictions. Any hospital or facility found to have violated the limits could be fined up to $25,000, though the requirements would be dropped during nationally or state-declared public health emergencies.

The Massachusetts Nurses Association, the union backing Question 1, had proposed a similar ballot question in 2014, but agreed to drop the effort after state lawmakers passed legislation setting a two-patient limit for nurses in intensive care units. At the time, both sides — the nurses union and the Massachusetts Health & Hospital Association, a trade group which opposed the original measure — applauded the compromise.

If passed, the ratio requirements would take effect on Jan. 1, 2019.

Why do nurses say stricter limits are necessary?

Proponents say the proposed limits would not just lessen the load on those in the already demanding field of nursing, but also — and perhaps more importantly — make conditions safer for patients.

According to a survey conducted by the nurses union in April, 77 percent of Massachusetts nurses said they were getting too many assignments. They reported an average workload of six to eight patients. The union presented these findings along with troubling independent research showing that higher numbers of patient assignments were associated with longer hospital stays and increased issues for patients, such as readmission, medication errors, and even deaths.

“There is a law in Massachusetts that sets a safe maximum limit on the number of children that a childcare provider can care for at one time,” Angela Ortiz, a co-chair of the patient limits campaign, testified at the time. “But once she enters the hospital, she loses that protection.”

The survey results also found that an increasing number of nurses was reporting such problems due to understaffing compared to previous years. And while 63 percent said hospital management sometimes adjusted staffing levels when nurses faced unsafe patient loads, 40 percent said administrators were not responsive to their concerns.

Overall, 86 percent of nurses in the survey — which appears to have been weighted toward MNA members — said they planned to vote for the proposed ballot question that would become Question 1.

What is the argument against having these limits?

Hospitals argue that the blanket proposal is too rigid and expensive, and could even force some smaller hospitals to close. And despite the MNA’s survey findings, many nurses in the state agree. The coalition of opponents to Question 1 also includes ANA Massachusetts, the state chapter of the American Nurses Association, a professional organization for nursing.

Opponents argue the proposed law would take away the ability of management to devote resources based on the “unique and ever-changing needs of each patient.” They say the “one-size-fits-all” proposal would result in longer wait times and budgets cuts in other areas in order to comply with the requirements.

Boston Medical Center estimated that, if passed, the question would result in up to 62 medical-surgery bed closures, 800 fewer childbirths at the hospital each year, and a decrease in the daily capacity of the emergency department of more than 100 patients. The hospital also said the costs associated with the ballot question would lead to major cuts to its community health programs and services.

“Question 1 will not only impact our ability to make critical and timely decisions during emergencies, but I worry that the services many of our patients and their families rely on will be cut off because of the financial impact of the law,” Susan Anwaye, a nurse at Boston Medical Center, said at the time.

MNA members have countered that hospitals — many of which have reported profits and ten-figure revenues — should be able to cover the additional costs. But opponents of Question 1 say the biggest negative impacts would be felt by smaller, rural and community hospitals that do not have that financial flexibility. Baystate Health, a network of hospitals in Western Massachusetts, came out last month against the measure, estimating that it would have to hire 220 additional nurses and perhaps close some units. What would the impact actually be?

A pivotal question is how much the cost would be for hospitals statewide to comply with the law, if enacted.

Both sides have cited their own studies to bolster their arguments.

The MNA, the state’s largest nursing union, points to a study by a Boston College professor estimating that the annual cost of implementing Question 1, including hiring between 539 and 1,617 new full-time nurses, would be between $35 million and $47 million. Meanwhile, a hospital industry-backed study found the initial annual cost of Question 1 would be $1.3 billion and would require 5,911 additional nurses.

In an attempt to settle the issue, the Massachusetts Health Policy Commission, the state’s health care watchdog agency, decided to do its own independent study, which it released last Wednesday. Their findings lined up much more closely to hospitals’ estimates.

According to the HPC report, Massachusetts would see an estimated annual cost impact of $676 million to $949 million. The agency added that the estimate was “likely conservative due to lack of detailed staffing data.” Officials said that hospitals would have to hire 2,286 to 3,101 additional nurses in order to meet the ratio requirements.

“Our analysis raises significant questions about the impacts of these ratios on health care costs and spending in the Commonwealth,” Stuart Altman, the HPC’s chair, said in a statement.

Has this ever been tried elsewhere?

Yes, but only in one state: California.

And as the HPC report chronicled, there are some significant differences between the Golden State’s nurse staffing law and the one on the ballot next month in Massachusetts.

First, California’s law, which was passed in 1999, was implemented in a staggered fashion and wasn’t fully in place until 2004. The Massachusetts law’s requirements would take effect less than two months after the Nov. 6 election.

Another big difference was that California’s ratios — which are generally less strict than the ones being proposed in Massachusetts — were determined by officials in the state’s Department of Health Services, whereas the specific ratios in Question 1 are already written into the initiative.

Lastly, there was no prohibition on hospitals reducing staff levels as a result of the patient ratio requirements under California’s law, while Question 1 specifically bans any reductions in staff (including staffing of non-licensed nurses) to comply with the requirements.

Furthermore, it’s unclear if California’s law had any major impact.

According to the HPC report, nurse staffing did significantly increase after the ratios were implemented (as opposed to hospitals reducing staff), and, though there has been no comprehensive analysis of the overall costs, some mid-tier hospitals did face “substantial financial pressures.”

The studies done on the impact of California’s law on patient outcomes has found mixed results. While some studies showed improvements, including lower rates in “failure to rescue,” there was no “systematic improvement” in patient outcomes; “some worsened, some improved, and some did not change,” the report said.

“I interpret the literature as a little bit of a wash,” Joanne Spetz, a professor at the Institute for Health Policy Studies at the University of California, San Francisco, testified Wednesday, according to MassLive.

The HPC also found Massachusetts already performs better than California on five of the six “nursing-sensitive quality measures” that they reviewed.

Where do local elected officials stand on the measure?

Sen. Elizabeth Warren has embraced Question 1 and its backers.

“Nurses work hard to take care of all of us when it matters the most, and we should do the same for them by establishing standards to ensure they have the help they need to do their job safely,” Warren said in a statement last month. “I stand with our nurses and support a yes vote on Question 1 in November.”

Sen. Ed Markey also says he “stand[s] with Massachusetts nurses” and will vote yes on Question 1. In a statement to Boston.com, Markey noted how nursing is consistently ranked among the most trusted professions and said that “we should trust them to know what they need to do their jobs safely and effectively.”

“Health care should be about the patients and those professionals that care for them,” he said. “It is important that we continually and cooperatively work to improve the quality of care provided to the patient and allow medical professionals, especially nurses, to do their jobs safely.”

Markey added that he has “confidence in our state leaders to work with our hospitals and other health care institutions to implement this policy fairly should it pass.”

According to The Boston Globe, Question 1 also has the support of Reps. Jim McGovern, Stephen Lynch, and Joe Kennedy III, as well as Democratic congressional nominees Ayanna Pressley and Lori Trahan.

Gov. Charlie Baker, however, has been characteristically cautious about taking a stance on the bill. The Bay State Republican — who, like Warren, is running for re-election this year — said last month that he was “waiting to see” the HPC report. His Democratic challenger, Jay Gonzalez, has supported the ballot question.

“Governor Baker appreciates the Health Policy Commission taking the time to conduct this thorough report into the increased costs associated with the question and he will carefully review the findings,” spokesman Terry MacCormack said in an email.

Update (Oct. 10): Baker told reporters Wednesday that he will vote no on Question 1, citing the cost estimates in the HPC report. The governor also noted that Massachusetts already has a higher nurse-to-patient staffing ratio than California and said he had heard from smaller hospitals and health care centers that “their operational future” would be “put in jeopardy” if Question 1 passed.

“They said to me that they would have a heck of a time, that they did not believe they probably could implement the law, if it were to pass as written, which set off a bit of an alarm bell for me,” Baker said.

Two polls last month found Massachusetts voters all over the map on the ballot question.

The following week, WBUR released the results its poll conducted by MassINC Polling Group, which was taken Sept. 17 to Sept. 21. It found that race in a dead heat, with voters split 44 percent to 44 percent over whether to vote yes or no. Again, 12 percent — the highest of any ballot question — said they were undecided.

As the Globe noted last month, the groups backing and opposing Question 1 have both fore-fronted nurses in their campaigns. They’ve even adopted similar names, websites, lawn signs, and near-identical Twitter handles (@PatientSafetyMA versus @MAPatientSafety).

As if we needed another reason to make this debate more complicated.

Correction: A previous version of this article incorrectly referred to the American Nurses Association as a union. It is an association for the profession of nursing. 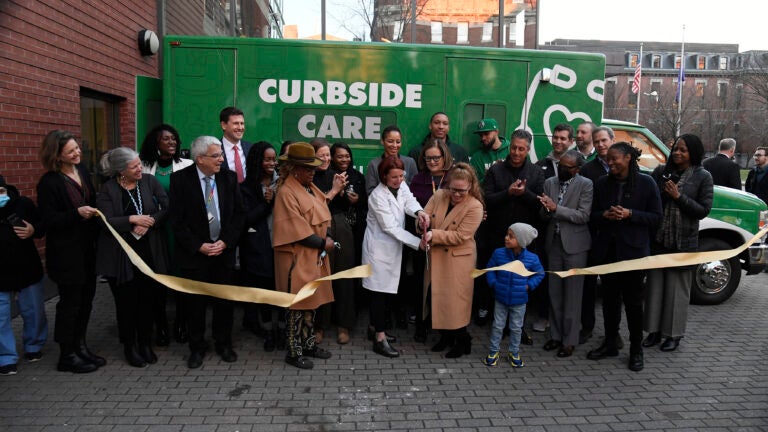